Status update — November 26, 2018
Kaaba MFI has struggled to remit payment to Kiva due to repayment challenges and operational issues. Kaaba has previously expressed willingness to repay, but Kiva has not received a repayment from Kaaba since October, 2017, despite offering them an adjusted repayment plan and extra time.  Kiva has concluded that further payment is unlikely. Should Kaaba send Kiva repayments in the future, these will be settled out to lenders on a pro rata basis.

Status update — March 2, 2018
Kiva has decided to pause Kaaba MFI's access to fundraising loans on the Kiva platform, as they have been late in making repayments to Kiva for several months. This is due to difficulties they've faced in collecting payments, the result of a drought that has impacted clients. While many clients have recovered, payment delays have continued due to ongoing challenges that Kaaba faces in sending funds to Kiva because of the underdeveloped banking sector in Somalia and cashflow challenges due to recent currency devaluations. Kaaba MFI remains in regular contact with Kiva staff and has assured Kiva that they will make full repayment of funds owed to Kiva lenders as soon as they are able, likely in the next 2 months.

Status update — September 6, 2017
Since early 2017, Somaliland has been faced with a severe drought causing famine across the country. This has highly impacted businesses across the region, which has affected borrower repayment capacity. As such, Kaaba temporarily waived client repayments as they've been unable to make repayments to the institution. There has also been a change in Kaaba's operational team, resulting in the late payments not being fully reported to the Kiva system. As such, borrowers appear to have repaid on Kiva despite the fact that they were unable to. Kiva staff and Kaaba have been in very regular communication over the past few months, and we expect Kaaba to be able to make a repayment to Kiva lenders in the near future for amounts collected from borrowers.

In a region severely lacking in commercial banks and banking regulations, Kaaba Microfinance Institution (K-MFI) is playing a crucial role in providing underserved communities in Somaliland with vital access to capital.

Since Somaliland declared independence from Somalia in 1991, its status as a self-declared sovereign state has deeply hindered the economy, creating an informal system that relies heavily on remittances. K-MFI aims to provide financial services to those who are financially excluded from the current system. In particular, K-MFI seeks to enable low-income and poor entrepreneurs in Somaliland (with a focus on women) to become self-reliant and serve as agents of change in their respective communities.

K-MFI was initiated as a small microfinance project by the Doses of Hope Foundation in 1998 and was later established as an independent microfinance institution in 2009. Doses of Hope (DOH) is a non-governmental development foundation that was set up in the late 1990s by Fadumo Alin, then a political refugee in the Netherlands who had fled Somaliland during the civil war. By saving a portion of the support payments that she received as a refugee, Alin was able to start the organization.

DOH’s microfinance project, K-MF has become the main channel for supporting the surrounding communities. What began as a small micro-credit project with 150 clients in 1999, has grown into a microfinance institution with about 5,000 clients at the beginning of 2013.

Currently, the MFI offers three Islamic loan products in the form either of assets sold to clients at a markup, or -- on rarer occasions -- profit-sharing investments in small and medium enterprises:
Murabaha: to finance working capital or investments for micro-businesses. 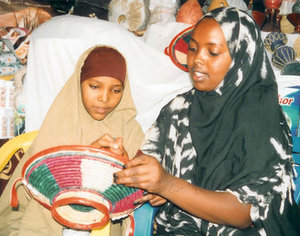 With Kiva funding, K-MFI is proposing to create a new youth-targeted Murabaha laptop loan. This new product aims to provide students and recent graduates with laptops on credit, helping them to further their education or build successful businesses.

According to K-MFI staff, education providers have identified the lack of access to computers as limiting for high-potential students and graduates. Due to the country’s unique situation, consumer goods like computers are not readily available even for those who would have the means to purchase these items. The new Murabaha laptop loan will consist of a laptop purchased by K-MFI and resold to the client at a markup of 1.33% to 8%, depending on the loan term requested by the client, with repayments over a period of up to six months.

Since its inception, K-MFI has not received any debt funding. Numerous organizations, including Rabobank Foundation, Oxfam Novib, United Nations Development Program, UNHCR and USAID have provided grant funding to K-MFI. However, most of these donors have placed significant restrictions on funds that have prevented the institution from building savings and providing products on credit. In this way, Kiva’s risk-tolerant capital is the only option for funding the Murabaha laptop loan.

A Note on K-MFI’s Portfolio Yield:

We care deeply about the cost that Kiva borrowers pay for their loans, which is why fair pricing is a core part of our initial due diligence process for Field Partners. With Kiva's 0% capital, many of our Field Partners are also able to add additional value to their loans by reducing interest rates, offering non-financial services or creating new loan products.

For partners with reported portfolio yields or average APRs higher than 50%, Kiva takes steps to check that the high rates are justified by the impact of the loans. Kiva also verifies that the partner is not generating unreasonable profits or paying inflated salaries, and that the partner’s elevated operating costs are justified by its operating environment and/or the design of its loan products.

We seek to support loans that don’t impose an unjustifiable cost burden on hardworking borrowers. We nevertheless recognize that in order to reach vulnerable and excluded people with high-impact products and services, some of our partners incur high costs that necessitate charging higher-than-average costs to borrowers in order to allow for sustainability and scale.

Factors that drive up the costs that this partner organization charges its borrowers include:

• They operate in Somalia, which is a conflict-affected region. This can greatly increase the cost of safely delivering financial services to borrowers.
• They work in areas with very poor infrastructure, such as limited roads. This increases the costs of finding clients and maintaining branch offices.
• They operate in an area with a limited or poorly functioning banking system. This makes it difficult to access funding locally, and makes it more challenging to send and receive payments on loans from outside the country.
• They’re a small company or organization that hasn’t yet achieved the scale and efficiency necessary to reach sustainability and reduce pricing, but the impact of their services merits the opportunity to prove their business model.
• They operate in a market where microfinance is highly underdeveloped. This means that finding, training and maintaining qualified staff is more expensive and difficult than in more-developed markets.

To provide demand-based financial services to the low-income and self-employed people of Somaliland, with the purpose of empowering low-income and vulnerable groups (with a focus on women) to become agents of change through improved access to finance.