Lend
Borrow
About
0 Basket
Log in
Categories
Regions
North America
Central America
South America
Africa
Eastern Europe
Middle East
Asia
Oceania
Saved searches
Checkout (0)
Where Kiva works
The browser version you are using is not supported by Kiva. Please use the most recent version of these supported browsers for Kiva to function properly.

Tecnosol's final loans with Kiva have defaulted, and this partnership is now closed. For the last 18 months, Kiva has been working with Tecnosol to try to recover the remaining outstanding amounts due to Kiva lenders. The political crisis in Nicaragua remains unsolved and has unfortunately hurt the small & medium enterprise sector; as such, Tecnosol continues to face serious operational and financial issues. Kiva’s present assessment is that this Field Partner is unable to make further payments, and thus the remaining $274,755.64 in outstanding amounts due to Kiva lenders has been defaulted. If Kiva is able to recover any additional funds from Tecnosol, they will be applied to lenders' accounts on a pro-rata basis.

Due to the situation in Nicaragua, Tecnosol continues to face serious operational and financial issues. They have failed to meet their payment obligations to Kiva lenders since April 2018. Tecnosol currently has about $280,000 in outstanding debt to Kiva lenders that is now considered delinquent. Kiva has worked with Tecnosol to try to recover these funds and has negotiated a repayment plan until the crisis in Nicaragua is resolved and Tecnosol is able to collect borrowers’ outstanding payments. Kiva will continue to work to recover the amount owed, and will pass those funds on to lenders as they're received.

Protests have started in Nicaragua in late April against a since-canceled move to cut social security benefits and increase payroll taxes. People have taken to the streets in demonstrations that have called for President Ortega to step down. Unfortunately, these protests have resulted in the loss of life and a partial economic paralyzation of the country. Talks are currently on-going among all parties to resolve the situation peacefully. We have been in contact with our partners and are currently monitoring the situation closely as Kiva borrowers and partner staff have been affected by such political and social unrest. This might result in an increase in delinquency rates since a lot of informal economic activities have come to a complete stop. As more information comes in, we will update lenders accordingly.

After 29 months on Kiva and 242 loans fundraised, TECNOSOL has graduated out of Kiva’s Experimental Partnership program and been given a risk rating of 1 star.

TECNOSOL, based in Nicaragua, is a for-profit renewable energy company that provides electricity to families living off the grid throughout Central America. By selling solar home systems at affordable prices, it enables households to generate their own energy and replace toxic and expensive sources of light and heat like kerosene, diesel, and wood.

Founded in 1998, TECNOSOL has grown to comprise 70 to 80% of the solar home system market in Nicaragua. Today, it has 17 regional branches serving extremely remote, rural areas -- including branches in El Salvador, Honduras and Panama. And at the end of 2011, it had installed more than 40,000 solar panels benefiting about 250,000 people and saving them an estimated $1.1 million per month on kerosene.

In addition to lights, TECNOSOL’s solar home systems can run refrigerators, freezers, water pumps, televisions, radios, cell phone rechargers and even electrical fences to increase security for livestock. This is extremely important in Nicaragua, where at least 2.5 million people -- 35% of the population -- live off the grid.

The company imports the solar panels, stores, distributes and sells them, and provides after-sale maintenance and repairs. It is distinguished by its emphasis on customer service at every stage of the supply chain, helping accelerate adoption of solar technologies where people may not otherwise be interested. While solar remains the company’s focus, it has also branched into thermal, biomass, wind and hydro energy solutions. 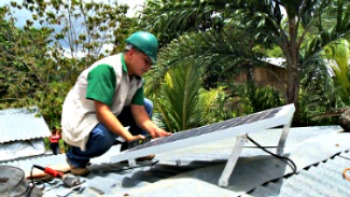 A unique approach to lending

Many of TECNOSOL’s customers cannot afford the extremely high upfront costs of buying solar home systems. The lack of financing options is one of the biggest limitations for growth of solar in Central America. Investing in solar is considered to be too risky for most formal financial institutions.

Kiva loans help these households purchase solar home systems. Borrowers are required to make a 20% down payment and pay an annual interest rate of 20% to TECNOSOL. This may sound high, but it’s necessary to help the company reach into rural regions where no other distributors or even microfinance institutions work. TECNOSOL uses all interest to cover operational costs of providing loans, not to make a profit.

Borrowers are helped in making repayments on their loans by saving on kerosene.  The average home solar system replaces about 270 liters of kerosene a year, at a cost of US$1.27 per liter. This translates into annual savings of US$340, which pays back the costs of the home solar system within three years.

Borrowing Cost Comparison (based on 2017 data)