Just in time for Father's Day on SUNDAY, we want to share some stories of exceptional fathers supporting their families with the help of Kiva loans. 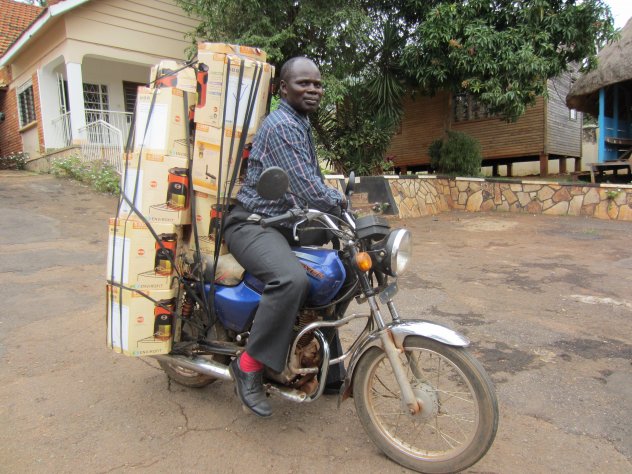 He borrowed $375 through UpEnergy in Uganda to buy an inventory of improved/clean-burning cookstoves to sell in his local community around the capital city, Kampala. His story is incredible, and he’s an amazing father.

Aaron was orphaned at a young age and lost 6 out of his 7 siblings. Under these circumstances, he was only able to get 7 years of education before entering the workforce. Today he’s the father of 15 -- 5 of his own children and 10 orphans he has taken in, providing them shelter and sending them to school. He values being able to support kids growing up without families like himself.

To better support this extended family, Aaron has decided to buy and sell improved cookstoves that use 50% less firewood. Not only does this help prevent respiratory disease, it also ends up saving a lot of money and time that would have been used to purchase or collect firewood. By bringing this technology to his community, he’s making a better living to keep his kids in school, all while helping others improve their quality of life.

This business model proved to be so successful for Aaron that he has already taken out a second larger loan on Kiva to double his inventory. He paid off his first loan after just one month. 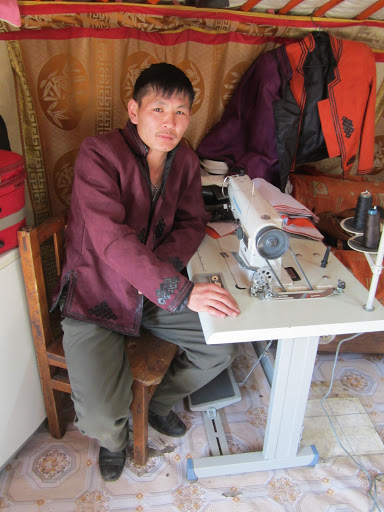 He runs a sewing shop with his wife in Ulaanbaatar, Mongolia. He took out a $1,250 loan through Credit Mongol to buy a sewing machine so he could better work with leather and silk and make more money selling fancy “national dresses” which are in high demand.

At age 36, Erdenebayar is married with three kids. Together, they reside in a ger on the outskirts of the country’s capital. Gers are traditional felt tents often used by Mongolia’s nomadic communities. They lack basic city infrastructure, including running water.

Even so, all three of Erdenebayar’s children attend a local secondary school. This is an incredible achievement considering the small percentage of kids in Mongolia WHO are able to advance past primary school due to costs and availability of education. Erdenebayar pays for all of this with the family’s tailoring business, started with his wife in 2004. They still use their home as a workshop, making dresses for national celebrations, weddings and graduation ceremonies. Not many tailors can make these because they require specialized skills, but Erdenebayar and his wife have worked hard to make a name for themselves.

Last year, Erdenebayar bought an electric sewing machine with his Kiva loan and repaid it in full on time. The sewing machine has made his work easier and faster -- a huge improvement from the hand crank machine he used to USE.

With their extra monthly earnings, he was able to pay for his daughter to take extra classes at her high school. And they now have more left over at the end of every month. In the future, Erdenebayer would like to have his own shop and a stall at the local market to sell his clothes -- which would allow him to cut out middleman costs. 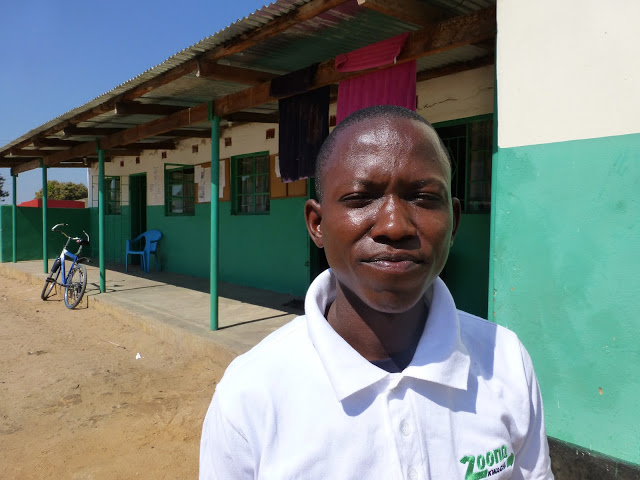 A 26-year-old father of a 2-year old boy, Muyoyeta lives with his family in a small fishing village in Zambia. Through Kiva partner Zoona, he runs a mobile transactions kiosk that is in very high demand in his village.

His $4,975 Kiva loan provides him with more working capital so he can make more and larger transactions for people in his village -- an especially significant improvement in his village where there are no banking services. Muyoyeta himself is providing his neighbors with the first service in the village that make it easy to send and receive cash.

Muyoyeta did not complete high school due to financial constraints, but now that his business is succeeding he has gone back to evening classes to get a diploma and set a good example for his young son. With a diploma and extra profits from his growing business, he will be able to give his young family a solid foundation. 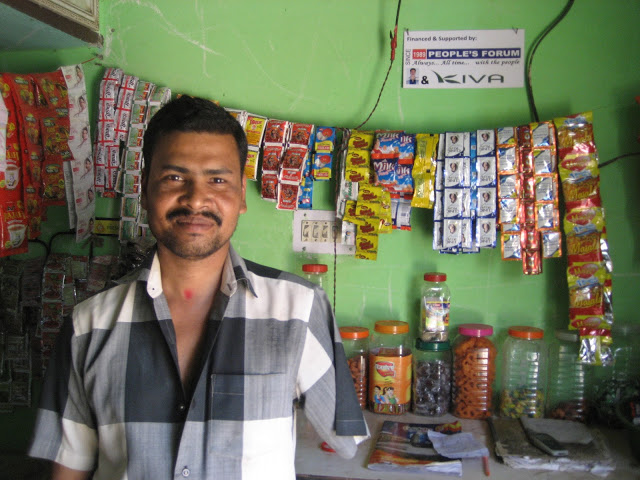 He owns a general store in Balugaon, India, about two hours outside of the capital of the country’s poorest province, Odisha. He took out a $550 loan through People’s Forum to buy a fridge for ice cream, increasing his inventory and boosting his income.

At age 40, he lives with his wife and 8-year-old daughter. He was an electrician for the local government until 2010 when he and his son were tragically hit by a car while crossing the road. His 13-year-old son was killed and Prashant lost his left arm. He could no longer work as an electrician, so to keep his family afloat, he opened up a small grocery store in his house. His shop sells everything from rice to cooking oil to sugar and soap. This is now his family’s only source of income.

Even though his village is small, he has had a hard time meeting customer demand. Before his loan, he didn’t have enough to maintain inventory levels for even a week. When he started looking around for a loan, he was worried by the high interest rates being charged by most moneylenders. He was thrilled to find People’s Forum, which offered lower interest.

Prashant says that life hasn’t been easy since his injury and death of his son, but his family has worked hard to survive. Now he’s able to provide a stable living for his wife and daughter and plans to further expand his store. His primary goal now is to make enough money to send his daughter to college.

The men above are fathers who have touched the lives and hearts of Kiva staffers. But we also wanted to open this up to our lenders and volunteers. Here are some of the incredible borrower stories we heard from the Kiva community:

Edwin, 20, is single, living with his three brothers who are 18, 15 and 12 years old respectively since his mother died. He's the oldest, which means it's his responsibility to care for them. Now he feels obligated to move them forward in their own lives, and says his dream is to work and see his brothers grow. According to Michael, the volunteer who highlighted him, this loan "was the original inspiration for me to want to volunteer for Kiva and lend as much as I possibly can. Whenever I let myself forget how blessed I am and start focusing on life's petty problems, I reread this loan description and am reminded of what's really important in life.

John in Uganda is just 28, but cares for all of his orphaned brothers and sisters. His greatest desire is to see them finish their educations. And this motivation makes him work even harder. To make ends meet, he runs a small retail shop and grows bananas on a patch of land to sell. He also teaches kids in the local area. He used his $400 Kiva loan to improve his banana farming operation. 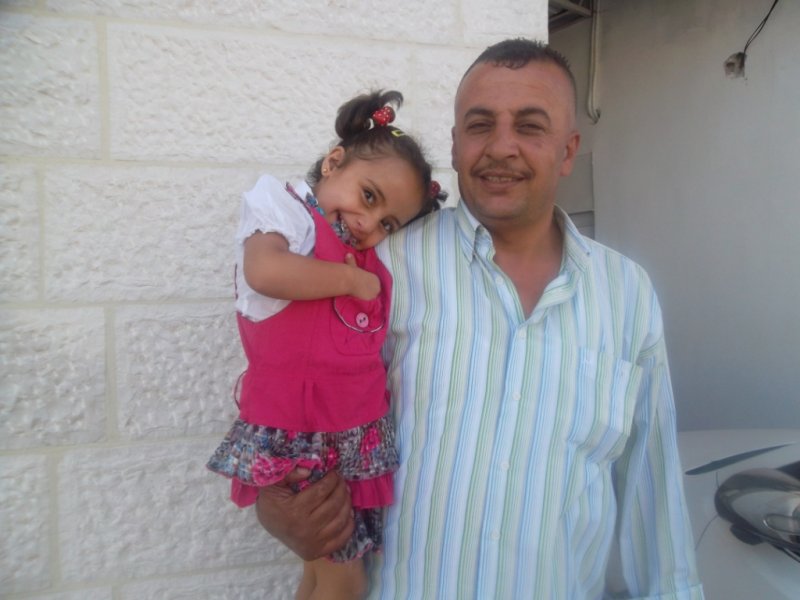 While this loan was actually for the man pictured's wife Amal in Jordan, Kiva volunteer Amy calls it "one of her all-time favorite father photos, because the father's pride in his child shines in his face, and the child is so obviously in love with her dad."

Shafozil in Tajikistan is 28 and already the father of 3 children. As the breadwinner of the family, he has been providing taxi service for six years. He plans to use extra income from a loan to buy technology for his children. Because he lives in a remote region, he wants his kids to grow up informed and up to date with the modern world.

A 29-year-old single father in Ecuador, Lorenzo sells sandals at retail and took out a $1,400 loan to buy more merchandise to sell. His dream is to improve his family's quality of life, and while he works hard, his favorite way to spend free time is with his daughter.

Isomil in Tajikistan had to say goodbye to his older son, who moved to Russia to find work so he could send money back to support his parents and brothers and sisters. To repay his son for this kindness, Isomil took out a Kiva loan for building materials. His plan is to build his son a house for his wedding when he returns to Tajikistan.

Sahid's wife and children live in Java, Indonesia, but for the last 23 years, he's worked miles away in Bali as a laborer and junk scavenger. He had to do this to make enough money to send home. Recently, he was able to save enough to buy a motorcycle. Now he can travel much faster and father to sell junk and handicrafts. Now he dreams of making enough to buy a house and bring his family to live with him in Bali.

Vivian may be running a growing business in Houston, Texas, but she wouldn't be where she is today without her father. Growing up in Nigeria, she had big dreams, and when she turned 17, her father -- who worked hard on his own business all his life -- paid for her to go to college in the United States. "Looking at how successful he was, I wanted to do the same," Vivian says about her father. Now she runs her own business designing and manufacturing African textile fabrics in the U.S. that she sells online.

Nikolai is a pizza maker in Khoost, Ukraine, but he took out his Kiva loan to finish remodeling his children's bedrooms. The father of three, he owns a small house, but all of his kids have to sleep in the same room. He's long had the goal of adding two bedrooms on to the house. His oldest son just finished first grade, and it's important to Nikolai that he has personal space to do his homework and rest. Kiva volunteer Amy says of Nikolai's loan, "This reminded me of my own father, who spent a good portion of his life working on and enlarging the house I grew up in."

And finally, there's Luis (pictured below), a 55-year-old father of 7 who employs 5 men and 2 women at his weaving workshop and home. He works with his children to make traditional garments for indigenous women in Guatemala. His dream is to have a plot of land to build his children a home and give them the support they need to succeed in school. 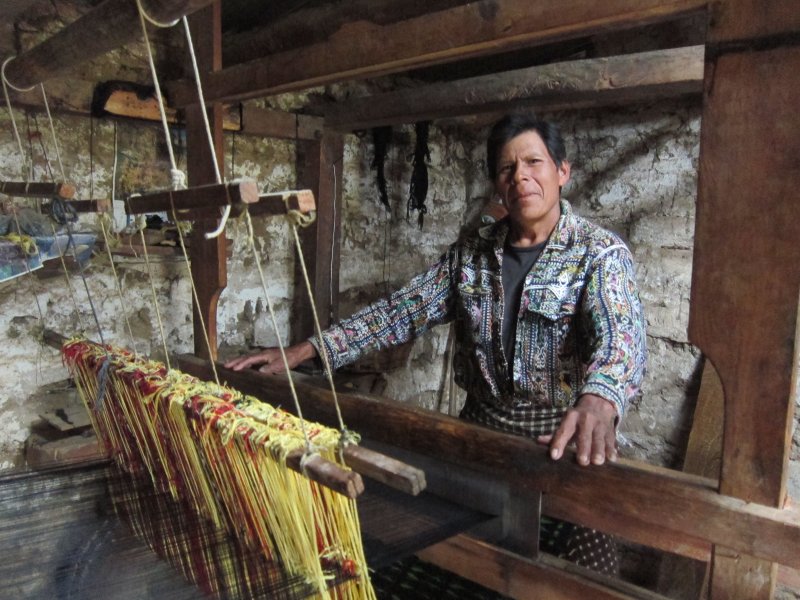 There are a lot of ways you can support fathers like these around the world. But making a loan on Kiva is unique -- not only do you get to see where your money is going, you’re also giving someone the tools they need to help themselves.

So if you’re still looking for a great Father’s Day gift, dedicate a loan. When you dedicate a loan, you’re actually doing three good deeds. You give the dads in your life an unforgettable gift, you touch someone’s life with the capital they need to thrive, and, when the loan is repaid, you give Kiva a vital donation to help us reach even more borrowers around the world.

Go to kiva.org/lend, and look for the heart before you check out. Click to dedicate your loan and even send a special message about why you chose that loan just for him.

Questions about how to dedicate a loan? Send them our way at blog@kiva.org. 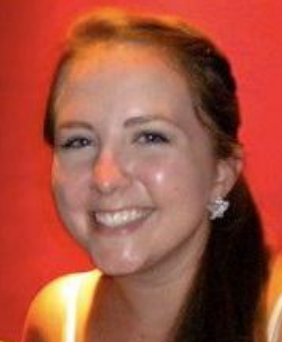 A native of southern California, Emily is a recent graduate from Santa Clara University where she studied Economics and Spanish Studies. The highlight of her college experience was the semester she spent abroad in Granada, Spain. She knew she wanted to pursue a career in economic development after reading Half the Sky. Emily will be joining the Marketing and Communications team as a Blog and Social Media Intern and is especially excited to find new and creative ways to spread Kiva’s work to more people. In her spare time, she enjoys reading, listening to country music, and re-watching Friends episodes for the millionth time.