Have you eaten rice? Saying hello in Cambodia 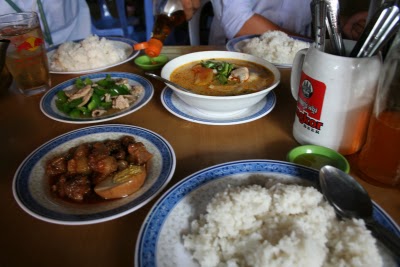 The standard salutation in Cambodia is Sua s’dai, “Hello,” followed by Nham bay howie nov? or “Have you eaten?” For the rest of the day, if you see someone a second or third time you don’t need to bother with any greeting–other than inquiring about their lunch or dinner.

This isn’t limited to when speaking Khmer, either. When I arrive at work at MAXIMA, my co-workers immediately ask me–in English–if I have had breakfast. Kiva borrowers ask me, via the credit officers, if I’ve eaten yet when I arrive at their doorsteps. Whenever I come back from running errands at lunchtime, I am greeted with, “Have you eaten yet?”

This is a standard greeting in Cambodia, meant mainly as a conversational ice-breaker, much as the weather is to the English. However, I can’t help but feel comforted that so many people are seemingly concerned with my caloric intake. When I run into the MAXIMA CEO, Kimseng, eating a giant bowl of noodles at 8am, he says “Have you had breakfast?” When I tell him I have, he asks, “Do you want more breakfast?”

Like the stereotypical Italian and Jewish mothers seen in so many comedy routines, my colleagues are unduly interested in how much, and what, I eat. “You are so big,” one of the credit officers said to me, confused, “but you don’t eat much rice.” And it’s true. I tower over most of the men in Cambodia where the people have slight, delicate frames. And despite their backbreaking work in the rice paddies, I am the one with the farmer’s broad shoulders and big feet.

And yet somehow I manage to eat less rice than they do. Every day we have lunch together at MAXIMA. It is standard practice for each person to start with a large bowl of rice and add small portions of the vegetable and meat dishes, a few bites at a time. Soon, the bowl of rice is gone and everyone, including the girls that weigh half what I do, serve themselves a second bowl of rice.

Yesterday someone said to me over lunch, “You say that you like it, but you don’t eat much.” Never in my life have I been accused of being a dainty eater until I arrived in Cambodia. In my normal life I’m more often equated to a human garbage disposal, but here they worry that I don’t eat enough rice.

“Have you eaten?” is a regular greeting in not just Cambodia but China, Vietnam, Myanmar, Korea, the Philippines, Thailand, parts of Laos, India and in some of the indigenous populations that are spread throughout Asia. In many of these languages, as with Khmer, the literal translation is “Have you eaten rice?”

Many people believe that the expression originated due to the famines and food shortages that all of these countries have experienced in the past. Others believe that the expression merely shows the great priority these cultures place on food, and the social aspect of meals–how food brings people together. When the English talk about the weather, it is a way to make conversation while still maintaining an impenetrable distance. But asking about what, or if, you’ve eaten is warmly personal, and if you answer no and someone offers to feed you, it’s downright chummy.

While I was writing this, the Kiva Coordinator, Sophal, just peeked at my computer to see what I was working on and, while doing so, split a large, starchy sweet potato, called dam long, with her hands and handed me half. I went to get a glass of water and while in the kitchen I was asked, “Have you finished your breakfast yet?” Yes, I answered, comforted by the fact that someone cared enough to ask.

Lina Goldberg is a Kiva Fellow at MAXIMA Mikroheranhvatho, Co., Ltd. in Cambodia. She has eaten rice twice so far today.