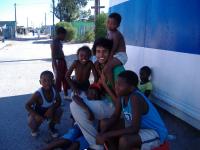 We loan because...
In memory of Neil Desai who tragically passed away from an undiagnosed heart condition on his 22nd birthday in 2008.

In 2006 before attending university Neil travelled the world. He played squash and cricket in South Africa, New Zealand and Australia. On his travels he fell in love with the townships in South Africa and, in his own words, was "struck most was when we visited a centre set up by South Africans to teach youngsters skills, like blacksmithing, mechanics and pottery so that they could make their lives better with skills...I hope that I have created a strong link here and that the next Huduma Fest (a concert Neil ran) could go to this amazing cause."

The Neil Desai Foundation is proud to support entrepeneurs in Africa through Kiva in memory of Neil.

About us
We raise money and donate to three main causes:
1. Supporting causes in Africa and India (countries that were dear to Neil and his family)
2. Cardiac risk in the young (www.c-r-y.org) - which aims to raise awareness of and prevent sudden cardiac death in young people
3. Sports in schools, in particular squash and cricket