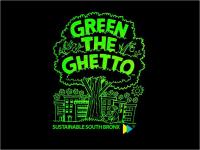 About us
The South Bronx suffers from environmental degradation, crippling poverty, endemic public health problems, and low educational aspirations among its youth. Sustainable South Bronx (SSBx) is a community organization dedicated to Environmental Justice through innovative, economically sustainable projects that are informed by community needs. Founded in 2001 Majora Carter, SSBx is dedicated to the environmental and economic revitalization of the South Bronx, a once wealthy community whose mid-20th century collapse has since made it a national symbol for urban decay.

Sustainable South Bronx operates in the Hunts Point neighborhood, part of New York's 16th congressional district, which has been the poorest in the United States for decades. 45% of its residents (and 50% of its children) live at or below the national poverty line. Only 40% of adults have a high school diploma, and its unemployment rate (24%) is New York City's highest. The population is mostly Hispanic (63.3%) and African American (32.4%), with 30% of who do not speak English.

Addressing the issues confronting the South Bronx today requires a comprehensive approach. Individual projects within each program area are generally carried out in collaboration with other community organizations and nonprofits, government agencies, elected officials, as well as for-profit entities.
• Sustainable Policy, Research & Evaluation, and Solid Waste and Energy Advocacy: Through in-depth research, position statements, crafting legislation, and building city-wide coalitions this program helps to identify environmental policy issues of concern to the community, and to spur the creation of specific initiatives for sustainable development. SSBx helped write legislation for the successful passage of New York City Local Law 5, which requires the City to rigorously assess the benefits and costs of best management practices for storm water management. In June 2008, SSBx also helped the NY State Assembly pass a bill (A.11226) that will provide a tax abatement to building owners for the installation of rooftop vegetation systems (“Green Roofs”) that cover 50% or more of their building. The New York State legislature passed the bill, which will allow New York City building owners to receive a Green Roof tax abatement that will reimburse installation costs by up to $100,000. Our Solid Waste and Energy advocacy efforts play a crucial role in South Bronx activism by coordinating and managing the participation of community organizations in a range of advocacy campaigns surrounding solid waste and energy. Program staff spearhead information sessions with community leaders and actions such as press conferences, meetings with elected officials, and testimony at hearings. Additionally, we have completed a feasibility study for an Eco-Industrial park. If developed, this Eco-Industrial Park would offer over 330 living-wage jobs, reduce truck traffic, and become a model of green manufacturing.
• Community Outreach & Education: This program trains South Bronx community members to become activists and leaders by identifying local problems and work to create solutions. In addition, this program serves as the education arm of SSBx, partnering with the Advocacy program staff to teach area public school students and other residents about issues of concern, such as public health dangers like obesity and asthma, and how they can take action.


• Workforce Training: The Bronx Environmental Stewardship Training (B. E.S.T.) program serves as a centerpiece to the work of SSBx. Launched to link both environmental justice and social justice, the program offers participants the opportunity to gain skills and certifications in ecological restoration, hazardous waste cleanup, landscaping and other similar fields. Consisting of three teen-week sessions per year, the B.E.S.T. program trains twenty predominantly low-income individuals per session, approximately 30% of which have been formerly incarcerated. The success of B.E.S.T. has helped launch a national “Green-collar” job movement, inspiring SSBx to extend our green-collar workforce training to both Green Building retrofitting and eco-conscious design and manufacturing.
• Greenway: South Bronx residents have far less open space and waterfront access than other parts of NYC. SSBx has played a joint-community role in the implementation of the South Bronx Greenway, which will consist of eleven miles of safe, outdoor recreation space in the South Bronx. SSBx raised funds to hire two graduates of our B.E.S.T. program to serve as Greenway Stewards (GWS). The GWS have ensured the survival of newly planted trees in the Hunts Point peninsula, identified new planting opportunities, and provided enhanced maintenance in two newly opened waterfront parks along the Greenway.
• Sustainable Ventures: Sustainable Ventures is a program which seeks to economically empower South Bronx residents by giving them a role in “Green” industries. It is an initiative to incubate businesses that are triple-bottom-line: People, Planet, and Profit. Our first venture is SmartRoofs, LLC, our Green Roof installation program. We aim to create a profitable business that will not only raise revenue for the organization, but also create earned income opportunities for graduates of our B.E.S.T. program, who learn how to learn how to install and maintain green roofs during their B.E.S.T. training. Thus becoming the future workforce as SmartRoofs LLC increases its market share. We aim to expand the services of the LLC to include other green building components, such as audits and retrofits. The ensuing LLC will also generate earned income opportunities for SSBx, while raising the organization’s profile and promoting green technologies in the Bronx and beyond.
• SSBxFab: SSBxFab, the latest initiative of SSBx, grew from a partnership with the Massachusetts Institute of Technology’s International FabLab program. It is aimed at inspiring a generation of South Bronx-based environmentally conscious designers and inventors. Begun in the Center for Bits and Atoms research consortium at MIT, the international FabLab (Fabrication Laboratory) program has spread throughout the world, with a mission to promote digital design and manufacturing as a means for economic empowerment. Our program will be an opportunity for residents in a low-income area to cross the “digital divide” and learn advanced computer skills, while at the same time be at the cutting edge of design and manufacturing technology. Our facilities will serve not only as a training center, but also as a small scale eco-industrial factory that will transform salvaged wood, metal, and plastics into consumer products, such as furniture.

1 messages. Join the team to get in on the action!