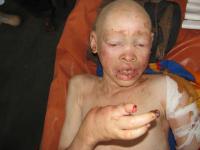 We loan because...
Stop the slaughtering of albinos in Tanzania and the sinister trade of their body parts for use in witchcraft rituals.

Albinism is a genetically inherited disorder. Sufferers are afflicted by an absence of melanin, a pigmentation defect in the hair, skin and eyes. It causes vulnerability to sun exposure and bright light. Many have very poor vision as a consequence. In tropical countries especially they can be vulnerable to skin cancers if unprotected from the sun.

Though it might seem absurdly obvious, Albinism has nothing to do with magical powers.

But in parts of sub-Saharan Africa, albinos have traditionally faced discrimination and prejudice. They are associated with the supernatural. To some, a white-skinned African person is seen as a kind of phantom or ghost, who rather than die will dissolve or disappear with the wind and rain.

Over the last five years in Tanzania, however, the situation has become much, much worse, with albinos increasingly subjected to murder and mutilation because of a completely absurd myth that albino body parts are effective in witchcraft rituals. Albino bones are also used as good luck charms and people believe they can make you rich.

About us
Attacks on albinos continue, despite international outrage and repeated attempts by the Tanzanian government to stamp out this truly appalling practice, since it first came to light that many albinos have been hunted down and attacked purely for their limbs and organs.

Officially there are around 8,000 albinos registered by the Tanzania Albino Society (TAS), but they says the real number is in excess of 170,000. Many albinos are still kept hidden by their families because of the stigma or because of fear that they might be attacked.

Please check following documentary: www.aljazeera.com/programmes/africainvestigates/2011/11/201111185428766652.html
Meet two albino children, victims of vicious assault. A 12-year-old boy called Adam (see team photo), who had part of his hand cut off and a 16-year-old girl, whose arm was hacked off. Their body parts sold for witchcraft rituals or good luck charms. (You may find some of the images disturbing)

More info:
TAS accepted the Martin Luther King Major Drum for Justice Award on behalf of albinos living in Tanzania in a ceremony at the US Embassy on January 15th 2009.

99+ messages. Join the team to get in on the action!