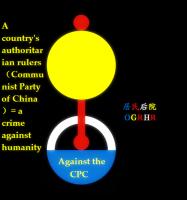 We loan because...
According to physics, the earth is a whole

Man is the most valuable (doing business)

About us
Must defeat the the murderer Chinese Communist Party 2012