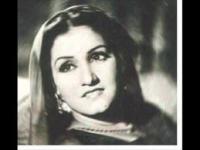 About us
Noorjehan was the adopted stage name for Allah Wasai (September 21, 1926 – December 23, 2000) who was a legendary singer and actress in British India and Pakistan. Her career spanned seven decades. She was renowned as one of the greatest and most influential singers of her time in South Asia and was given the honorific title of Malika-e-Tarannum (Urdu: ملکہ ترنم, English: the queen of melody).

Born in a Punjabi family of musicians, Wasai was pushed by her parents to follow in their musical footsteps and become a singer but she was more interested in acting in films and graced the earliest Pakistani films with her performances. She holds a remarkable record of 10,000 songs to her singing credits in various languages of India and Pakistan including Urdu, Hindi, Punjabi and Sindhi languages. Along with Ahmed Rushdi, she holds the highest record of film songs in the history of Pakistani cinema. She is also considered to be the first female Pakistani film director.

In 1957, Jehan was awarded the President's Award for her acting and singing capabilities.

In 1986, on a tour of North America, Jehan suffered from chest pains and was diagnosed with angina pectoris after which she underwent a surgery to install a pacemaker. In 2000, Jehan was hospitalised in Karachi and suffered a heart attack. On December 23, 2000 Jehan died as a result of heart failure. Her funeral took place at Jamia Masjid Sultan, Karachi and she was buried at the Gizri Graveyard near the Saudi Consulate in Karachi.