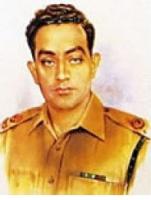 We loan because...
we care

About us
Major Raja Aziz Bhatti (1928 - September 10, 1965)[1] (Punjabi, Urdu: عزیز بهٹی‎) was a Hong Kong-born Pakistan Army's Staff officer who received Pakistan's highest award for valor. He was born in Hong Kong in 1928.[2][3] He moved to Pakistan before it became independent in 1947, living in the village of Ladian, Kharian, Gujrat. There he enlisted with the newly formed Pakistani Army and was commissioned to the Punjab Regiment in 1950. Each year, Major Bhatti is honoured in Pakistan on 6 September, also known as Defence Day of Pakistan. Major Raja Aziz Bhatti was awarded the Nishan-e-Haider, the Pakistan's highest military award for gallantry and the exemplary courage he displayed.