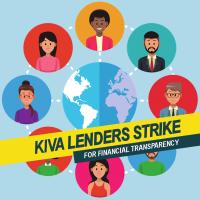 We loan because...
We used to loan because we believed in the mission, and we believed Kiva was doing its part. The need is still great, but Kiva has chosen to make a series of policy changes that negatively impact lenders. This series of changes reveal a pattern of shady behavior that has made it impossible to continue to lend in good faith. The changes Kiva made to the borrower profile pages in September 2021 were just the latest in a long series of shady policy changes including (but not limited to):

1. Changed the auto-lending terms to get at lender funds (from opt-out to opt-in). Auto-lending defaults to an automatic 15% donation to Kiva with every loan. Auto-lending now kicks in after just 45 days.

2. Changed the inactivity terms of service so that it is set to 'donate funds to Kiva' unless lenders go in and choose 'return funds to Paypal'.

3. Implemented one-click donations via an email campaign resulting in many lenders losing their entire cache of funds. Yet Kiva requires two-click verification for just about everything else.

4. Avoided treating Kiva U.S. like any other partner to display loan defaults and delinquencies. Thus hiding the 23% default rate.

5. Holding Nor Horizon repayments in a 'trust' instead of paying them back to lenders as they come in (this has been going on for over a year).

6. Moved or removed vital partner and loan information including risk rating, default rate, delinquency rate, etc. to an essentially non-visible 'tab' at the bottom of the borrower profile.

7. Loans advertised as "matched" are sometimes not matched, and it doesn't appear to be because the loan was funded or the matching funds ran out. A known issue that Kiva has acknowledged but not fixed.

8. Salaries for the leadership at Kiva have increased drastically in the last 3 years, beyond what is acceptable for an organization of its size and its stated mission.

About us
We are formerly active lenders who have halted (or significantly reduced) lending because of the pattern of shady policies implemented by Kiva. Most recently, Kiva made changes to the new borrower profile pages where they have effectively hidden or completely removed the financial data necessary for lenders to make sound financial decisions. Kiva has ignored our pleas for financial transparency. Because Kiva has been deaf to our concerns, we have created this team as a way to track those who have committed to stop lending until the financial transparency and responsibility issues are addressed. The team members and their previous lending patterns/loan totals will help measure the impact of our protest.

Note - we do not accept Anonymous users on the team. First, we cannot track their impact since Kiva does not provide stats for them. Second, the eventual goal is to bring our concerns to Kiva, and I don't feel anonymous users carry any weight.

99+ messages. Request to join the team to get in on the action!

Rankings Across All Teams