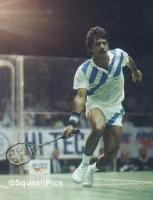 About us
Jahangir Khan (born 10 December 1963, in Karachi, Pakistan) is a former World No. 1 professional squash player from Pakistan, who is considered by many to be the greatest player in the history of the game, and many consider him a legend. Jahangir Khan is an ethnic Pashtun, originally from Neway Kelay, Peshawar. During his career he won the World Open six times and the British Open a record ten times. From 1981 to 1986, he was unbeaten in competitive play. During that time he won 555 games consecutively, the longest winning streak by any athlete in top-level professional sports as recorded by Guinness World Records. He retired as a player in 1993, and has served as President of the World Squash Federation since 2002.

With his dominance over the international squash game in the first half of the 1980s secure, Jahangir decided to test his ability on the North American hardball squash circuit in 1983–1986. (Hardball squash is a North American variant of the game, played on smaller courts with a faster-moving ball.) Jahangir played in 13 top-level hardball tournaments during this period, winning 12 of them. He faced the leading American player on the circuit at the time, Mark Talbott, on 11 occasions (all in tournament finals), and won 10 of their encounters. With his domination of both the softball and hardball versions of the game, Jahangir truly cemented his reputation as the world's greatest squash player. His success in North America is considered by some observers to be among the factors which led to growing interest in the international "softball" version of squash in the continent, and the demise of the hardball game in the late-1980s and 1990s.

2 messages. Join the team to get in on the action!