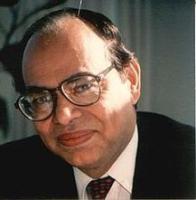 This is perhaps a true reflection of an amazing economics genius of modern times, Dr. Mahbub ul Haq.

His accomplishments are many which range from his work in United Nations as well as a leading policy maker for Pakistani finance.

He is recognized for the fact that he was a visionary Finance Minister for Pakistan whose five year plan was used by South Koreans to establish their country on modern lines.

Now a days, there is a model known as HDI or Human Development Index which is widely used to rank countries the world over based on their development. This is an established model followed by United Nations Development Program (UNDP) as a standard model for gauging any country’s development. Few people realize while reading its annual reports today that architect of this comprehensive model was no other than an amazing Pakistani, Dr. Mahbub ul Haq.

Amartya Sen, one of world’s leading economist paid tribute to Dr Haq’s work on HDI model in these words,

‘(Dr. Haq’s) work has brought a major change in the understanding and statistical accounting of the process of development. ... (The series of reports), initiated by Dr. Haq in the 1990s, has had a profound effect on the way policy-makers, public servants and the news media view social and economic advancement.’