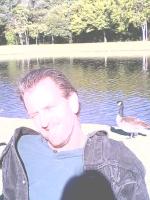 We loan because...
David died too young. He was a hard worker who ended life begging for a temporary job so he could feed and care for his son. He raised his son as a single dad for his boy's entire life. He had limited education. One of his proudest moments was getting his GED. David was honest, sincere and tough as nails with anyone who wasn't real. He knew much heartache and lived with physical pain every day. Sometimes he could barely walk, but he always, always worked when work was available. He did hard labor. He didn't own a vehicle. Sometimes he would walk for miles in rain, snow or humid heat to get to a job. David died on November 22, 2014 while sitting in the park. His beloved park. He loved the outdoors and if the sun was shining, he was outside. He always had to stay busy. The day he died, he raked the yards, cleaned the kitchen spotlessly, swept and mopped all the floors. He had called that morning to the temp agency begging for work. There was none. He died alone. In the evening. Under a bleak and softly raining sky. We love and miss you David. Every day.

About us
Sad and determined.