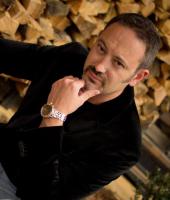 We loan because...
Brandon Vallorani graduated from the University of West Virginia with a Bachelor of Fine Arts in Graphic design in 1996. His skills as a businessman were apparent early on in his career, as he proved to be talented as a marketer and force in driving company revenue upwards. He was quick to scale the ladder of a large non-profit organization where he got his first job, going from Graphic Designer to Director of Media rapidly, shortly after becoming the Executive Vice President. In this prestigious position, Brandon developed and implemented various strategic plans for boosting the company, which ultimately were extremely successful.

In his fast-paced first employment, Brandon Vallorani was simultaneously earning his MBA at Thomas More College, specifically focused on business management. After completing this degree in 2004, that same year he moved to the south, where he became the Executive Vice President of a non-profit company, which he built up by just about 600% in less than four years.

Brandon's talents in the business world continued to grow through various business pursuits until ultimately he came to form Liberty Alliance, a company that "represents a network of websites dedicated to advancing Life, Liberty, and the Pursuit of Happiness. Our members and strategic partners leverage the power of new media to promote traditional values and generate more than 1,000,000 page views each day."

Brandon Vallorani prides himself on building his business and making it a wonderful place for his employees to work, but he also takes pride in his pursuits outside of the office as well. One of Brandon's favorite hobbies is hunting big-game and he often can be found practicing his marksmanship at the Governor's Gun Club in Powder Springs, Georgia. Brandon is also passionate about his interests in fine wines and fine cigars. He owns and co-founded his own fine cigar distribution company, called Safari Cigar, and he owns his own vineyard, Vallorani Vineyards. On top of being a successful entrepreneur, an avid pursuer of adventure hobbies and a fine wine/cigar aficionado, Brandon Vallorani above all enjoys spending time with his wife and 7 children, as well as with close friends.