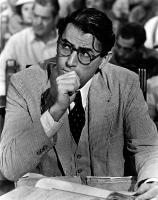 In 1995, the film was listed in the National Film Registry. It also ranks twenty-fifth on the American Film Institute's 10th anniversary list of the greatest American movies of all time, and #1 on AFI's list of best courtroom films. In 2003, AFI named Atticus Finch the greatest movie hero of the 20th century.
- - - - - en.wikipedia.org/wiki/To_Kill_a_Mockingbird_(film)
- - - - en.wikipedia.org/wiki/To_Kill_a_Mockingbird

About us
"But there is one way in this country in which all men are created equal - there is one human institution that makes a pauper the equal of a Rockefeller, the stupid man the equal of an Einstein, and the ignorant man the equal of any college president. That institution, gentlemen, is a court. It can be the Supreme Court of the United States or the humblest J.P. court in the land, or this honorable court which you serve. Our courts have their faults, as does any human institution, but in this country our courts are the great levelers, and in our courts all men are created equal."
- - - - *** Atticus is To Kill a Mockingbird's most upright character, representing the moral ideal of both a lawyer and a human being: he is brutally honest, highly moral, a tireless crusader for good causes (even hopeless ones), a virtual pacifist and, for the most part, devoid of any of the racial or class prejudices afflicting the other citizens of Maycomb. He goes to great pains to instruct his children on the importance of being open-minded, judicious, generous neighbors and citizens. He is eventually revealed to be an expert marksman, but he had chosen to keep this fact hidden from his children so that they would not in any way think of him as a man of violence. He was once the best shot in Maycomb County, but quit shooting because he felt he had an unfair advantage.
- - en.wikipedia.org/wiki/Atticus_Finch

23 messages. Join the team to get in on the action!