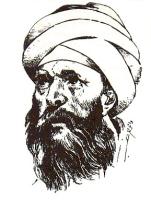 We loan because...
this is the right thing to do.

Ghazali has sometimes been referred to by historians as the single most influential Muslim after the Islamic prophet Muhammad.[6] Others have cited his movement from science to faith as a detriment to Islamic scientific progress.[7] Besides his work that successfully changed the course of Islamic philosophy—the early Islamic Neoplatonism developed on the grounds of Hellenistic philosophy, for example, was so successfully refuted by Ghazali that it never recovered—he also brought the orthodox Islam of his time in close contact with Sufism.[6] The orthodox theologians still went their own way, and so did the mystics, but both developed a sense of mutual appreciation which ensured that no sweeping condemnation could be made by one for the practices of the other.

Al-Ghazali was born in 1058 in Tus, a city in Khorasan province of Persia (Iran). His father, a traditional sufi, died when he and his younger brother, Ahmad Ghazali, were still young. One of their father's friends took care of them for the next few years. Later in 1070, Ghazali and his brother went to Gurgan to get enrolled in a madrassah. There, he studied fiqh (islamic jurisprudence) next to Ahmad ibn Muhammad Rādkānī and Abu'l Qāsim Jurjānī. After approximately 7 years of studying, he returned to Tus.

His first important trip to Nishapur occurred around 1080 when he was almost 23 years old. He became the student of the famous muslim scholar Abu'l Ma'ālī Juwaynī, known as Imam al-Haramayn. After the death of Al-Juwayni in 1085, Al-Ghazālī was invited to go to the court of Nizamul Mulk Tusi, the powerful vizier of the Seljuq sultans. The vizier was so impressed by Al-Ghazali's scholarship that in 1091 he appointed him as chief professor in the Nizamiyya of Baghdad. He used to lecture to more than 300 students, and his participations in Islamic debates and discussions made him popular in all over the Islamic territories.

He passed through a spiritual crisis in 1095 and abandoned his career and left Baghdad on the pretext of going on pilgrimage to Mecca. Making arrangements for his family, he disposed of his wealth and adopted the life of a poor Sufi. After some time in Damascus and Jerusalem, with a visit to Medina and Mecca in 1096, he settled in Tus to spend the next several years in seclusion. He ended his seclusion for a short lecturing period at the Nizamiyyah of Nishapur in 1106. Later he returned to Tus where he remained until his death in December, 1111. He had one son named Abdu'l Rahman Allam.

His 11th century book titled The Incoherence of the Philosophers marks a major turn in Islamic epistemology. The encounter with skepticism led Ghazali to embrace a form of theological occasionalism, or the belief that all causal events and interactions are not the product of material conjunctions but rather the immediate and present will of God.

The Incoherence also marked a turning point in Islamic philosophy in its vehement rejections of Aristotle and Plato. The book took aim at the falasifa, a loosely defined group of Islamic philosophers from the 8th through the 11th centuries (most notable among them Avicenna and Al-Farabi) who drew intellectually upon the Ancient Greeks. Ghazali bitterly denounced Aristotle, Socrates and other Greek writers as non-believers and labeled those who employed their methods and ideas as corrupters of the Islamic faith.

In the next century, Averroes drafted a lengthy rebuttal of Ghazali's Incoherence entitled the Incoherence of the Incoherence; however, the epistemological course of Islamic thought had already been set.

The autobiography Ghazali wrote towards the end of his life, The Deliverer From Error (Al-munqidh min al-ḍalāl; several English translations[9]) is considered a work of major importance.[10] In it, Ghazali recounts how, once a crisis of epistemological skepticism was resolved by "a light which God Most High cast into my breast...the key to most knowledge,"[11] he studied and mastered the arguments of kalam, Islamic philosophy, and Ismailism. Though appreciating what was valid in the first two of these, at least, he determined that all three approaches were inadequate and found ultimate value only in the mystical experience and insight (the state of prophecy or nubuwwa) he attained as a result of following Sufi practices. William James, in Varieties of Religious Experience, considered the autobiography an important document for "the purely literary student who would like to become acquainted with the inwardness of religions other than the Christian" because of the scarcity of recorded personal religious confessions and autobiographical literature from this period outside the Christian tradition

Another of Ghazali's major work is Ihya' Ulum al-Din or Ihya'u Ulumiddin (The Revival of Religious Sciences). It covers almost all fields of Islamic sciences: fiqh (Islamic jurisprudence), kalam (theology) and sufism. It contains four major sections: Acts of worship (Rub' al-'ibadat), Norms of Daily Life (Rub' al-'adatat), The ways to Perdition (Rub' al-muhlikat) and The Ways to Salvation (Rub' al-munjiyat). Many admirable comments were made regarding this book: "If all Islamic sciences were disappeared, they could be taken back from Ihya'u Ulumiddin." He then wrote a brief version of this book in Persian under The Alchemy of Happiness (Kimiya-yi sa'ādat).

Ghazali had an important influence on both Muslim philosophers and Christian medieval philosophers. Margaret Smith writes in her book Al-Ghazali: The Mystic (London 1944): "There can be no doubt that Al-Ghazali’s works would be among the first to attract the attention of these European scholars" (page 220). Then she emphasizes, "The greatest of these Christian writers who was influenced by Al-Ghazali was St. Thomas Aquinas (1225–1274), who made a study of the Arabic writers and admitted his indebtedness to them. He studied at the University of Naples where the influence of Arab literature and culture was predominant at the time." In addition, Aquinas' interest in Islamic studies could be attributed to the infiltration of ‘Latin Averroism’ in the 13th century, especially at [the University of] Paris.

Ghazali's influence has been compared to the works of St. Thomas Aquinas in Christian theology, but the two differed greatly in methods and beliefs. Whereas Ghazali rejected non-Islamic philosophers such as Aristotle and saw it fit to discard their teachings on the basis of their "unbelief," Aquinas embraced them and incorporated ancient Greek and Latin thought into his own philosophical writings.

Ghazali also played a very major role in integrating Sufism with Shariah. He combined the concepts of Sufism very well with the Shariah laws. He was also the first to present a formal description of Sufism in his works. His works also strengthened the status of Sunnite Islam against other schools. The Batinite (Ismailism) had emerged in Persian territories and were gaining more and more power during Ghazali's period, as Nizam al-Mulk was assassinated by the members of Ismailis. Ghazali strictly refuted their ideology and wrote several books on refutation of Baatinyas which significantly weakened their status.

Al-Ghazali had mentioned the number of his works "more than 70", in one of his letters to Sultan Sanjar in the late years of his life. However, there are more than 400 books attributed to him today. Making a judgment on the number of his works and their attribution to Ghazali is a difficult step. Many western scholars such as William Montgomery Watt (The works attributed to Al-Ghazali), Maurice Bouyges (Essai de chronologie des oeuvres d'Al-Ghazali) and others prepared a list of his works along with their comments on each book.

The following is a short list of his Major works:

Philosophy
Maqasid al falasifa (Aims of Philosophers) [written in the beginning of his life, in favour of philosophy and presenting the basic theories in Philosophy, mostly influenced by Avicenna's works]
Tahafut al-Falasifa (The Incoherence of the Philosophers), [in this book he refutes the Greek Philosophy aiming at Avicenna and Al-Farabi; and of which Ibn Rushd wrote his famous refutation Tahafut al-tahafut (The Incoherence of the Incoherence)]
Miyar al-Ilm fi fan al-Mantiq (Criterion of Knowledge in the Art of Logic)
Mihak al-Nazar fi al-mantiq (Touchstone of Reasoning in Logic)
al-Qistas al-mustaqim (The Correct Balance)

Al-Ghazali wrote most of his works in Arabic and few in Persian. His most important Persian work is Kīmyāyé Sa'ādat (The Alchemy of Happiness). It is Al-Ghazali's own Persian version of Ihya'ul ulumuddin (The Revival of Religious Sciences) in Arabic, but a shorter work. It is one of the outstanding works of 11th-century-Persian literature. The book was published several times in Tehran by the edition of Hussain Khadev-jam, a renown Iranian scholar. It is translated to English, Arabic, Turkish, Urdu and other languages.

Apart from Kimya, the most celebrated of Ghazali's works in Persian is Nasīhatul Mulūk (The Counseling Kings), written most probably for Sultan Ahmad Sanjar ibn Malekshah. In the edition published by Jalāluddīn Humāyī, the book consists of two parts of which only the first can reliably be attributed to Ghazali. The language and the contents of some passages are similar to the Kimyaye Sa'adat. The second part differs considerably in content and style from the well-known writings of Ghazali. It contains the stories of pre-Islamic kings of Persia, especially those of Anoshervān. Nasihatul Muluk was early translated to Arabic under the title al-Tibr al-masbuk fi nasihat al-muluk (The Forged Sword in Counseling Kings).

Zād-e Ākherat (Provision for the hereafter) is an important Persian book of Ghazali but gained less scholarly attention. The greater part of it consists of the Persian translation of one of his Arabic books, Bedāyat al-Hedāya (Beginning of Guidance). It contains in addition the same contents as the Kīmyāyé Sa'ādat. The book was most probably written during the last years of his life. Its manuscripts are in Kabul (Library of the Department of Press) and in Leiden.

Pand-nāma (Book of Counsel) is another book of advice and probably attributed to Sultan Sanjar. The introduction to the book relates that Ghazali wrote the book in response to a certain king who had asked him for advice. Ay farzand (O son!) is a short book of counsel that Ghazali wrote for one of his students. The book was early translated to Arabic entitled ayyuhal walad. His another Persian work is Hamāqāti ahli ibāhat or Raddi ebāhīyya (Condemnation of antinomians) which is his fatwa in Persian illustrated with Quranic verses and Hadiths.

Faza'ilul al-anam min rasa'ili hujjat al-Islam is the collection of letters in Persians that Ghazali wrote in response to the kings, ministers, jurists and some of his friends after he returned to Khorasan. The collection was gathered by one of his grandchildren after his death, under five sections/chapters. The longest letter is the response to objections raised against some of his statements in Mishkat al-Anwar (The Niche of Light) and al-Munqidh min al-dalal (Rescuer from Error). The first letter is the one which Ghazali wrote to Sultan Sanjar presenting his excuse for teaching in Nizamiyya of Nishapur; followed by Ghazali's speech in the court of Sultan Sanjar. Ghazali makes an impressing speech when he was taken to the king's court in Nishapur in 1106, giving very influential counsels, asking the sultan once again for excusing him from teaching in Nizamiyya and refuting the accusations made against him for disrespecting Imam Abu Hanifa in his books. The sultan was so impressed that ordered Ghazali to write down his speech so that it will be sent to all the ulemas of Khorasan and Iraq.