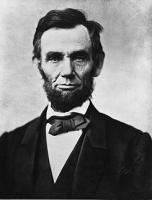 We loan because...
We want to help our fellows on planet earth.

About us
We are friends and fans of Ab Lincoln. Abraham Lincoln (February 12, 1809 – April 15, 1865) served as the 16th President of the United States from March 1861 until his assassination in April 1865. He successfully led the country through its greatest constitutional, military and moral crisis—the American Civil War--by preserving the Union by force while ending slavery and promoting economic modernization. Reared in a poor family on the western frontier, he was mostly self-educated.

He became a country lawyer, an Illinois state legislator, and a one-term member of the United States House of Representatives, but failed in two attempts at a seat in the United States Senate. He was an affectionate, though often absent, husband, and father of four children.

Lincoln was an outspoken opponent of the expansion of slavery in the United States, which he deftly articulated in his campaign debates and speeches.[1] As a result, he secured the Republican nomination and was elected president in 1860.

After war began, following declarations of secession by Southern slave states, he concentrated on both the military and political dimensions of the war effort, seeking to reunify the nation. He vigorously exercised unprecedented war powers, including the arrest and detention, without trial, of thousands of suspected secessionists. He issued his Emancipation Proclamation in 1863, and promoted the passage of the Thirteenth Amendment to the United States Constitution, abolishing slavery.