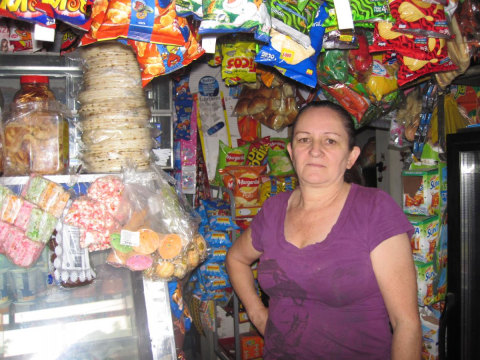 A loan helped to buy a barred door for the entrance to her business.

Luz Marina is a clear example that the impossible exists only in the mind. She says that she has learned from her own experience that it is enough to have a dream and strive to achieve it, because there are no obstacles in life that your dreams cannot overcome. Since she separated from her husband, she has assumed total responsibility for her home and has overseen the maintenance and education of her three children. Thus, earning a living became her highest priority and she began selling household products from her home. Today, thanks to her discipline and work she has managed to open a store. Her dream is to modify the living room in her house, which is the place where she has her store, so that she can improve service. She also wants to put a barred door at the entrance to prevent the thefts that others have been victimized by on several occasions. Consequently she is requesting a loan in order to make these investments, because she lacks sufficient capital.