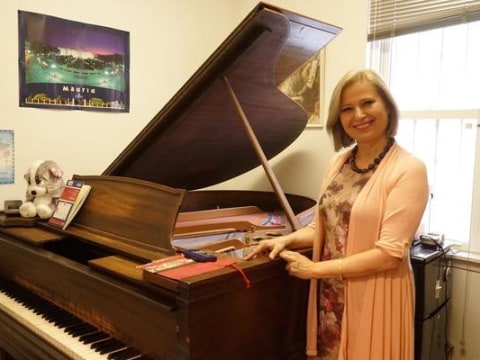 A loan helped a woman-owned business overcome the challenges posed by the COVID-19 crisis.

Teresa, Performing Arts Conservatory of New York's Executive Director since 2001, founded and created the Conservatory. A native of Spain, she graduated from the Royal Conservatory of Madrid with Masters degrees in Piano Performance and Music Education. She graduated the same year, 1987, with another Masters Degree in Law at Complutense University of Madrid. She was accepted as an exceptional student doing additional coursework towards a Doctorate in Human Rights. After graduation Teresa held a position at the Royal Conservatory of Madrid teaching piano. After two years she was invited by her teacher Professor Ubaldo to come to New York City. Teresa worked at Boys Harbor Conservatory for six years and at the same time obtained a Masters in Piano Performance from Hunter College before she accepted the position of Executive Director at Performing Arts Conservatory of New York. She has performed extensively in Spain, France, England, and the United States. Under her direction the Conservatory has consistently expanded its offerings and increased its enrollment. Teresa has also succeeded in attracting outstanding artist-teachers, trained in the United States, Europe, Latin America, and Asia. Not only has she succeeded in actualizing the original vision of the school, but she continually finds creative ways to sustain and develop its programs. Hundreds of her former piano students now are making great contributions teaching and performing throughout the world. Her long-term dream is to establish the Conservatory as a internationally-recognized center of culture and education.