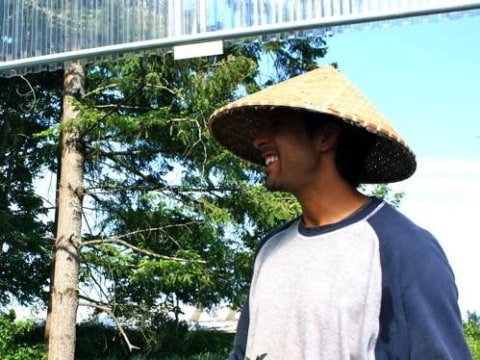 A loan helped strengthen our urban farm through the purchase a farm truck, which will serve both as a mobile, pop-up farmers’ market, and as delivery vehicle for distribution from our local food hub in Long Beach, CA. A Kiva loan improves the economic sustainability of the farm, giving us more robust marketing and advertising opportunities so that we can connect with a greater number of families in our community, and beyond. And through the purchase of seed and educational materials, a Kiva loan improves our local teaching and leadership capabilities.

As a city boy from a humble background, Demitrius never imagined his life would evolve to one of food justice advocate, urban farmer, and beet greens promoter. He followed the life he and his mother laid out for him early on: to play basketball, go to University, and achieve the stability of a professional career. The path was set and followed, until the Great Recession dealt Demitrius the same fate as many Americans – no real employment opportunities, causing great financial distress right around the birth of his daughter. In near desperation, Demitrius moved out of the City, planted his roots in the dirt, and started an organic farm in the country near Portland, OR! Since that time, it's become clear to Demitrius that the balance one finds in places like the Pacific Northwest – where slow food culture thrives in the fast city – can be achieved in southern California, and a meaningful, sustainable business can be created around community health, wellness and food. Today, Long Beach Farms harnesses an entrepreneurial spirit with the intent of creating more direct connections between individuals and families in our local communities, and the farmers that grow their food. Long Beach Farms continues to create volunteer and employment opportunities for youth and veterans in the neighborhoods around our farm sites, and intends to strengthen its leadership in our local food system so that we can nurture the next generation of urban farmers, healthy food champions and neighborhood wellness leaders!