The Curse of Diamond Mining in Sierra Leone

The website of a foreign-owned diamond mining company in Sierra Leone states, "Our Diamonds Doing Good: Follow our progress as we demonstrate that responsible and sustainable diamond mining can - and will - elevate and empower the people, the economy, and the country of Sierra Leone."

During my second week in Sierra Leone as a Kiva Fellow, I visited Kono district where this company - among others - bases its operations, and if this trip has taught me anything, it is that there is little evidence that diamond mining has brought any positive changes to the local community, or even has the best intentions of doing so in the future. 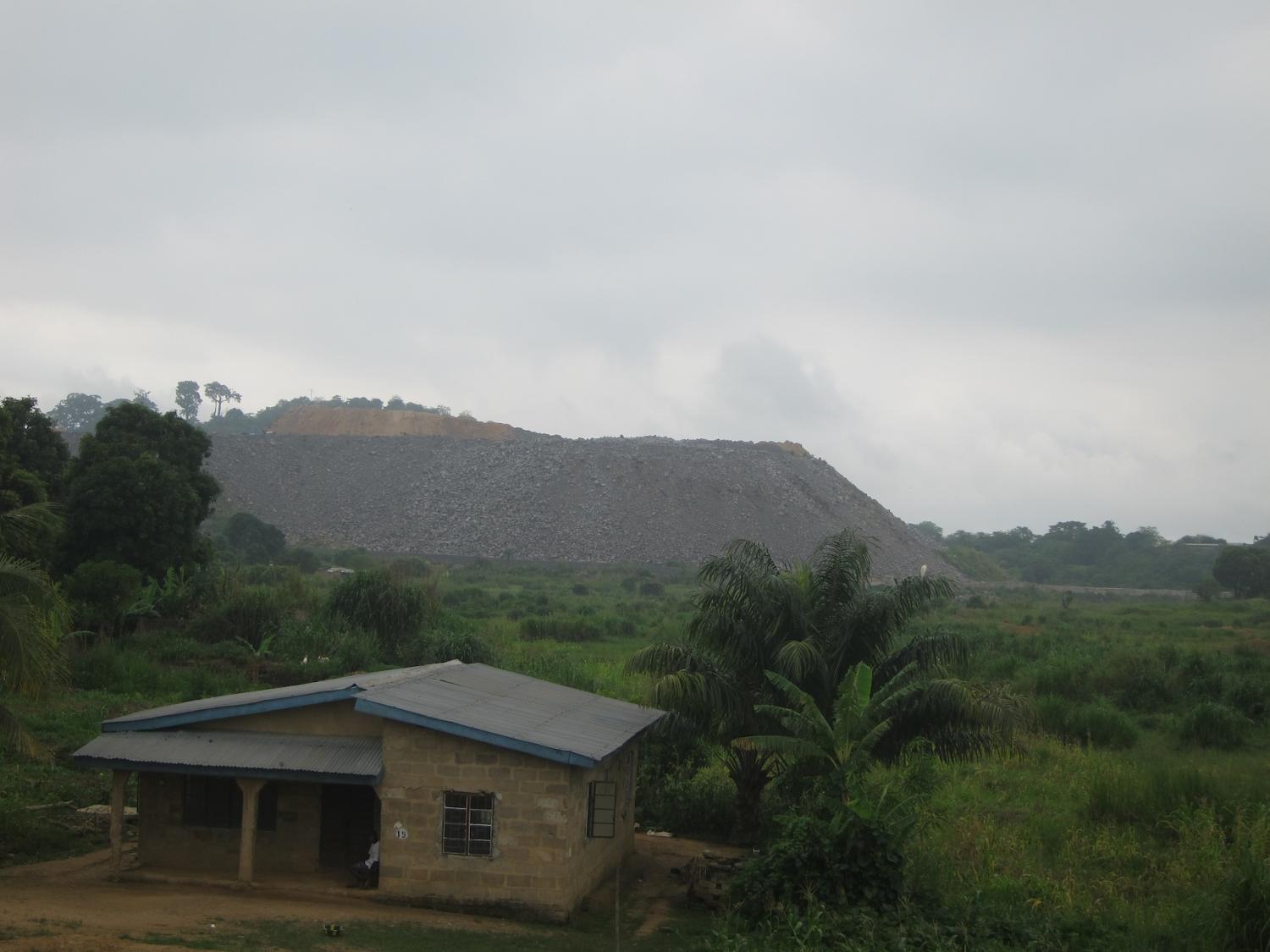 
[…] the whole country envied the Kono people as some thought the land will be paved with blessings from the diamonds rather it developed into a curse.

Kono (also refered to as Koidu) is located in the eastern part of Sierra Leone, and it is the diamond center of the country. A person might assume that such an area may be more developed than other towns, but reality is an ironic opposite of that…. starting with the 4 hour drive to get to Kono. Have the multinational companies invested in basic infrastructure such as paved roads? The answer is no. Our 4x4 jeep lost a portion of its exhaust pipe and the front bottom engine cover on the drive there. Come rainy season, this road turns muddy which cuts off its community from supplies. There is no alternate better route. 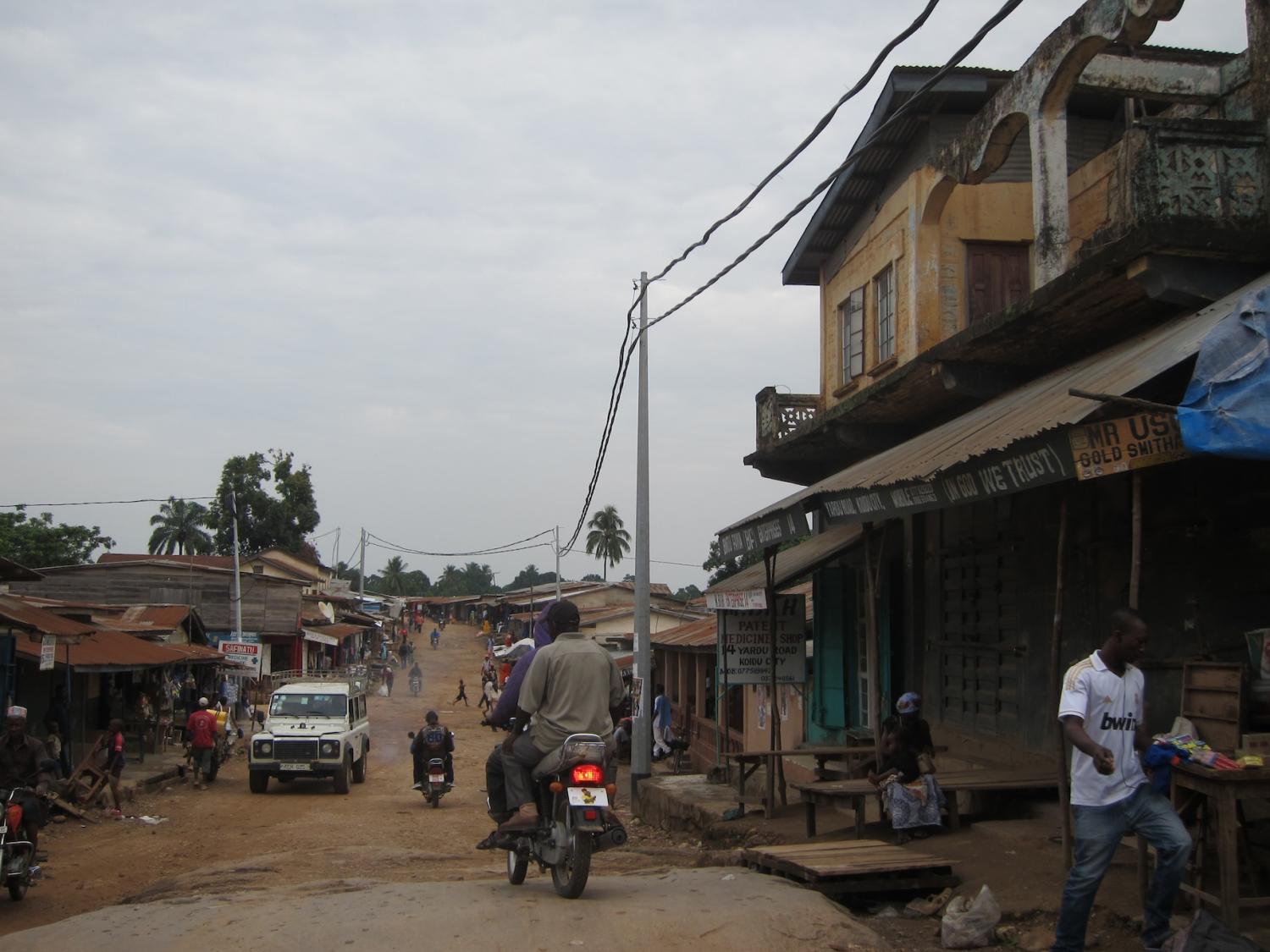 A street in Koidu in Kono district
Much of Kono's infrastructure is underdeveloped, more so than other parts of the country. The town lacks an electricity grid, with everything running on individual generators. Because of its location and the difficulty in getting there, it is quite normal for Kono to have fuel shortages. Even SMT (one of Kiva's partners in Sierra Leone) has to strategically use its available fuel at the Koidu branch to turn the power on to update its database, and then turn it back off. 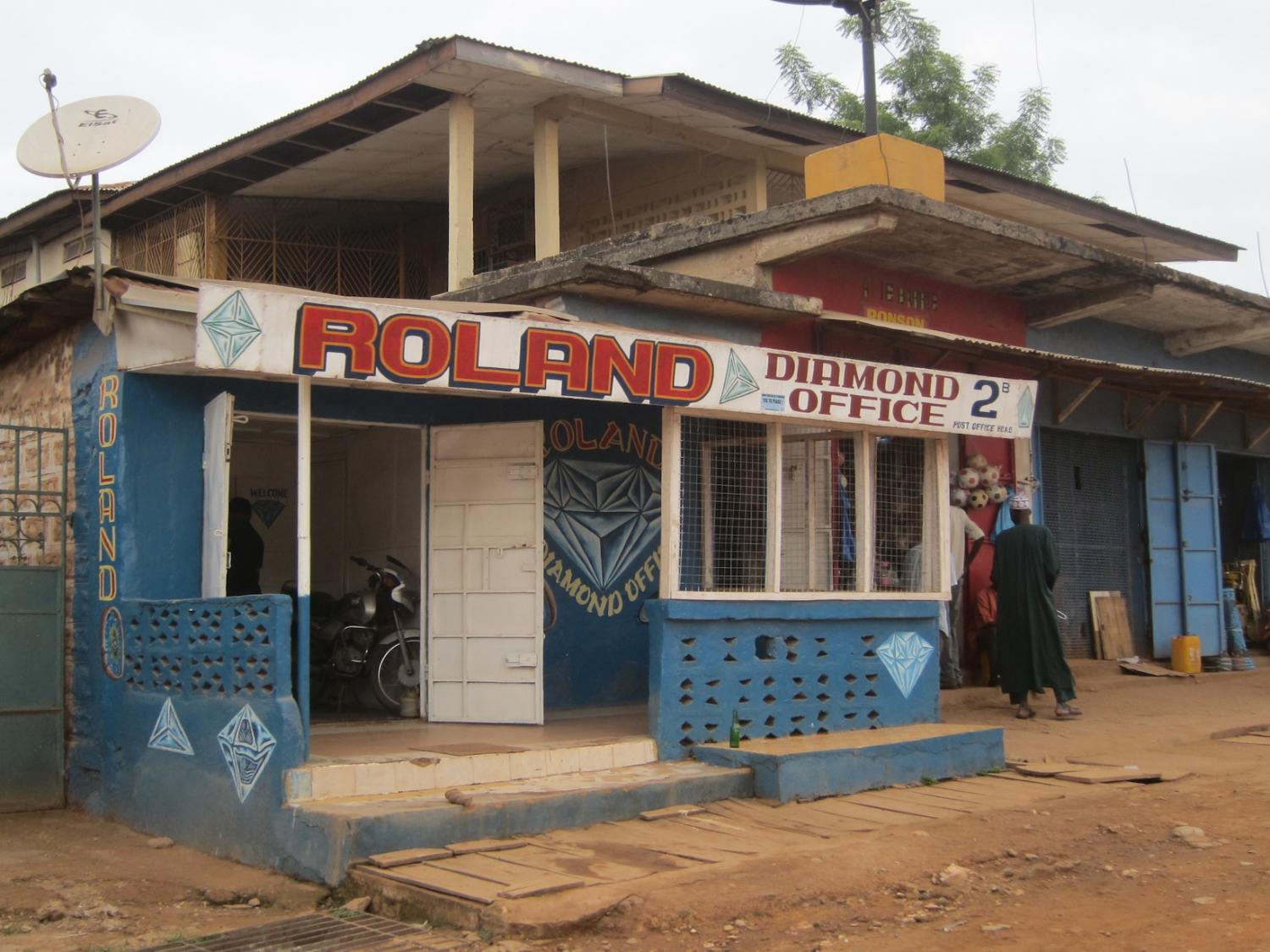 One of many diamond offices littering the streets of Koidu
While sanitation and garbage disposal infrastructure is also in dire need of investment in most of the country, Kono has the additional disadvantage of compounding that with environmental damage from mining. At the SMT office, it is quite common for the building to shake once a diamond blast goes off. Entire communities are being resettled into different areas so the land where their houses once stood are blown up for diamonds. One look at Kono will remind you of a stereotypical deserted gold rush city.


What will be left of this town once the diamonds run out?

While companies are required to file environmental assessment reports, there is no solid vision of how this land will be rehabilitated once its been all torn up and the companies move their operations elsewhere. 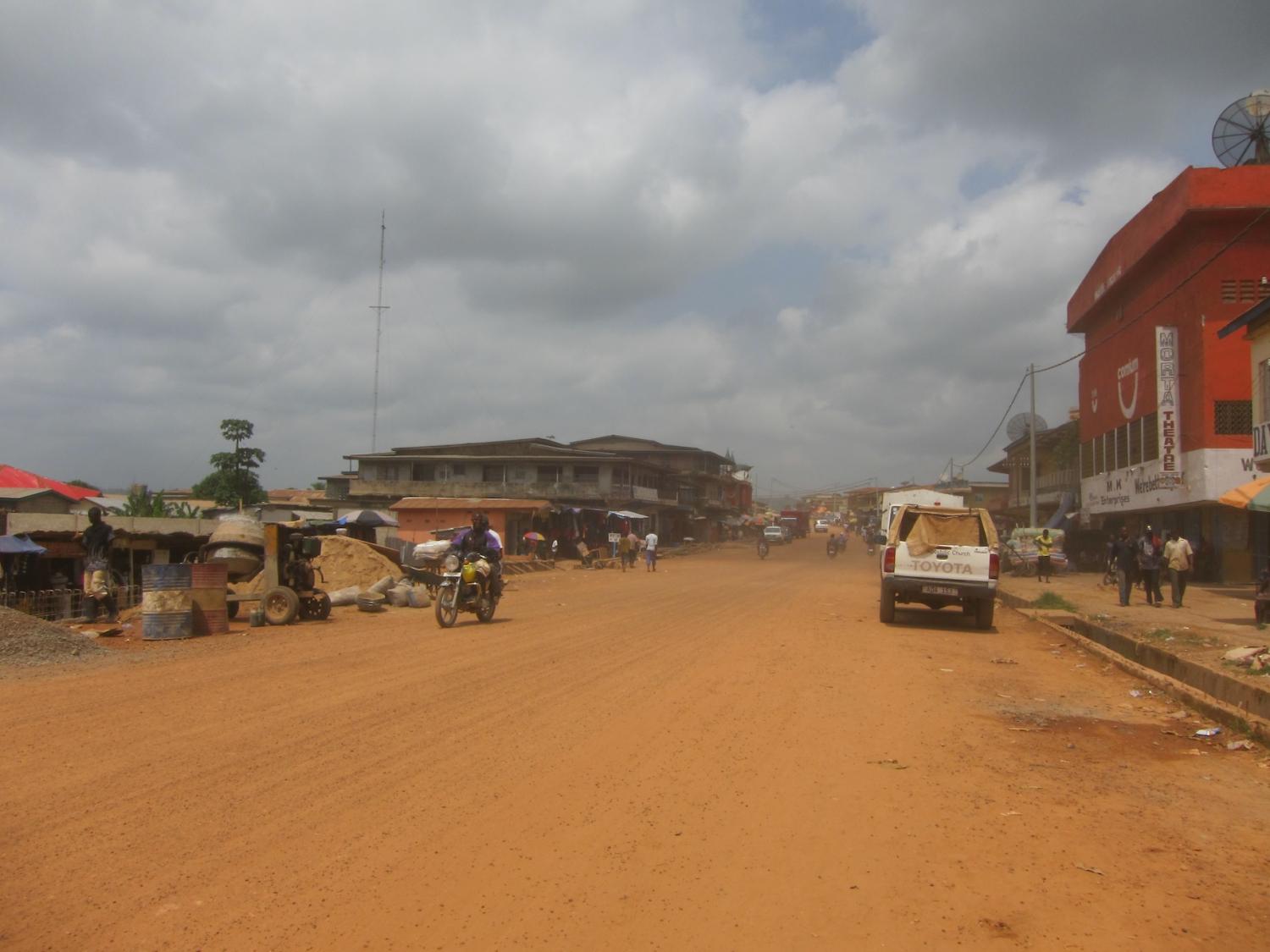 Koidu's main street. Diamond mining has brought very little infrastructure development to this grim town
An article in the Economist adds, a troubling aspect is that "[…] it is not clear that the government is enforcing a part of the mining law that says all extractors must set up an independent fund in order to rehabilitate the environment." Additionally, the country is struggling between protecting natural wildlife reserves and licensing the land to be mined. "The mining process will require the use of harsh chemicals like cyanide and caustic soda, some of which will be collected in an open tailings pond that will sit just next to a local village. And the mine will leave a huge scar on the land."

Some may argue that diamond companies are bringing jobs to the local community. It is true that there is an influx of workers to Kono in search for jobs, but again reality is quite different. As one article points out: Diamond mining is causing youth to drop out of school in hopes of "striking it big" and becoming rich. This is a critical issue since an entire generation of Sierra Leoneans are behind on their education because of the civil conflict between 1991-2002.

The same articles states that in Koidu " [...] around 3,000 children are estimated to be working in the mines, but there are no official figures and the number might be much higher" and "Children are paid 10,000-20,000 leones (US$3-6) a day and 40,000 leones [less than $10] if they find diamonds." This same diamond will sell for more than 1000 times that value in your local diamond store in the developed world. 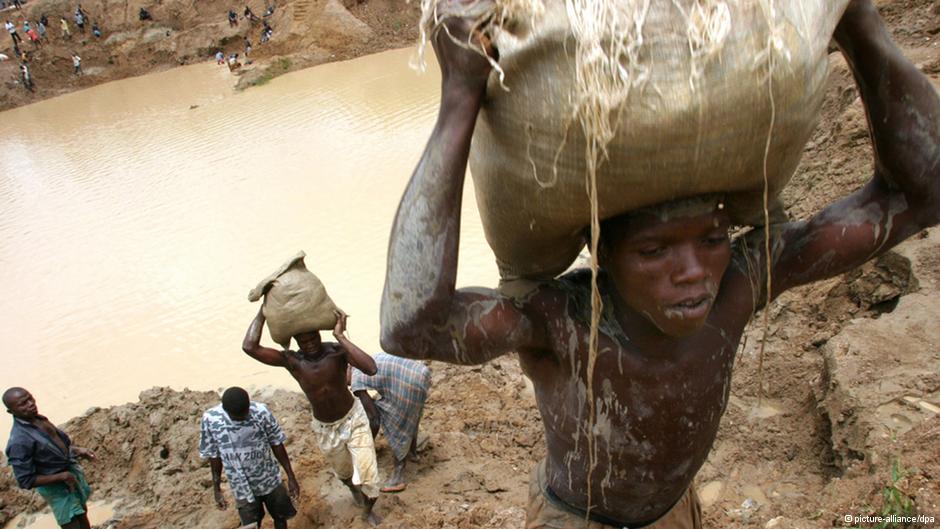 Photocredit: http://www.dw.de/sierra-leone-diamond-miners-toil-to-get-rich/a-16628965
The Economist also quotes two mining companies as saying, "Sierra Leone is getting a good deal and that without special treatment they might not have invested in the country." A good deal? Special Treatment? These are synonymous to tax evasion, illegal exporting, poor wages, and unacceptable working conditions.

Even the government is not seeing the revenue it should be from these companies in order to invest in the much needed development in Kono and the rest of the country. The Sierra Leone Telegraph summarizes the issues:


"Poor governance, corruption and the lack of human capacity to monitor and evaluate the operations and performance of foreign companies operating in the country, are making it easier for companies to succeed in avoiding or evading their obligations to the people of Sierra Leone."

The report makes the following recommendation:


"The government of Sierra Leone and the mining companies should take action to uncover and unleash the lost potential for development from the mining sector. But also international regulation is needed to strengthen transparency into the corporate structure and accounts of multinational mining companies." 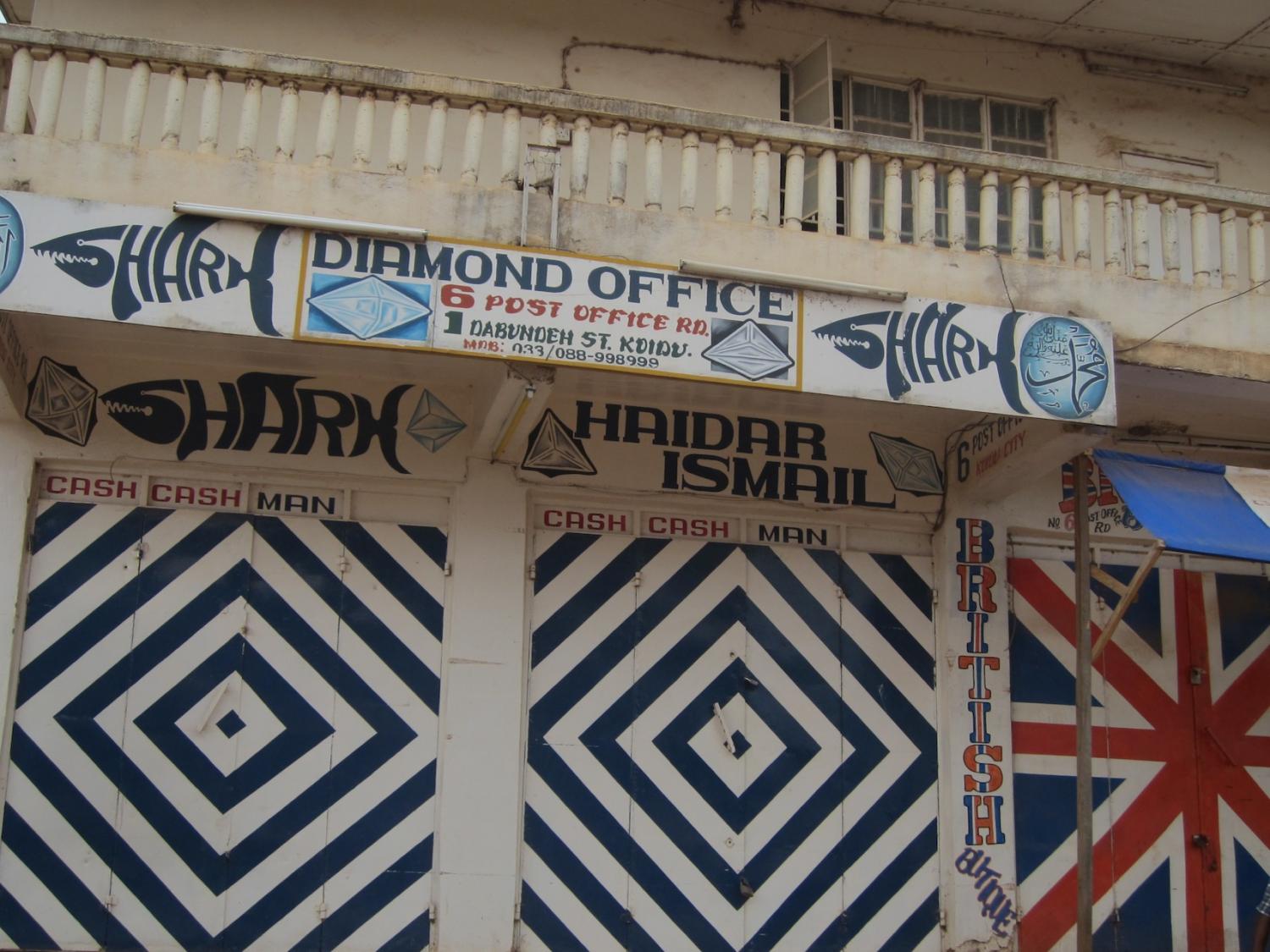 Another diamond office, appropriately titled "Shark"
With more diamond, iron ore, gold, magnetite, bauxite, and rutile mining expected to start soon, it is imperative for a nation that ranks 180 out of 187 on the human development index not to have its land pillaged for riches. While a new government agency has been set-up to review the existing mining contracts and recommend changes, locals have little faith in this entity so far.

From my three weeks here, it is quite obvious that Sierra Leone does not lack hardworking people or natural resources.With aid money beginning to decrease as Sierra Leone's politics stabilizes further, it imperative to ensure this country's future through developing industries that protect the land, create sustainable industries, respect the peoples' culture and history, and invest in the youth.

The Kimberley Certification of a diamond arguably guarantees that it is not a blood diamond; the certification has come under scrutiny and has prompted human rights group Global Witness to quit the process citing its failure to prevent conflict diamonds from reaching consumers. Additionally, the certification carries no significance regarding working conditions in the mines, assessment of the environmental impact, improvements to poverty levels, or guarantees against child labor.

While my personal choice to purchase diamonds has been permanently altered after a visit to Kono, I am not criticizing people who continue to do so. Yet, ignorance is not bliss, and insight into the realities of the mining industry is needed for local agencies and multinational corporations to be held liable by their own citizens and citizens worldwide. 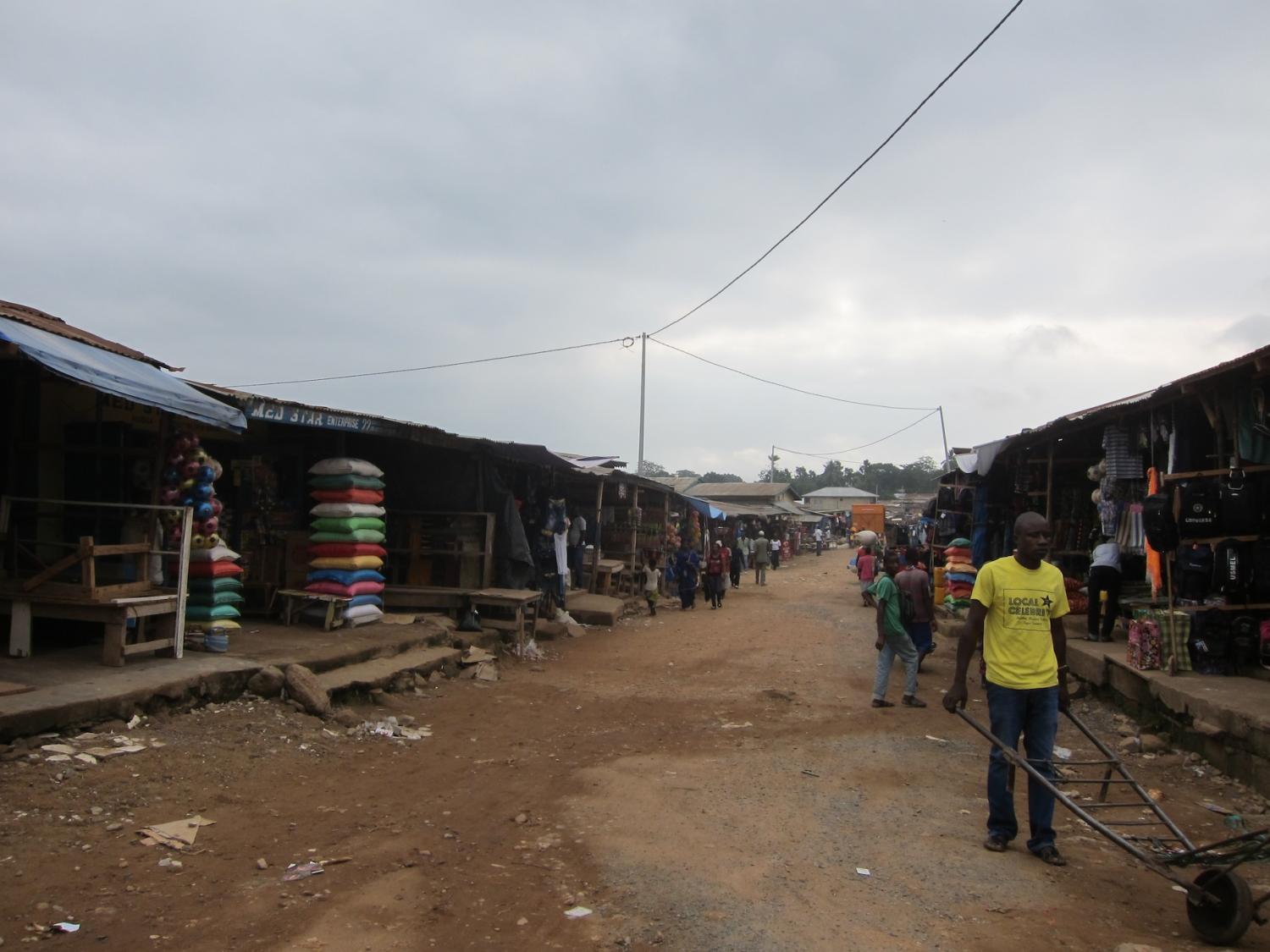 Koidu's main market. Mining companies do not contribute much of their spending to the local market and local businesses.
It is important to note, however, that my time in Sierra Leone has not been as grim as this blogpost may suggest. There is much beauty to this country and its very hospitable people. I hope to share those experiences in upcoming posts. In the meantime, I urge you to support a Kiva borrower in Sierra Leone and allow them to maintain their livelihoods independent of the mining industry. 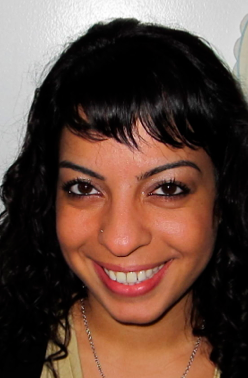 Taline grew up in Beirut, Lebanon during the civil war. At an early age, she became involved with a nonprofit peace education organization called Children's International Summer Villages (CISV) which has introduced her to some of her best friends around the world. Her passion for cultures, travel, and peace promotion stemmed from those experiences, and she simultaneously became fascinated with the science behind airplanes and flight. At the age of 17, she moved to Los Angeles to study Aerospace Engineering and spent six years working in the industry. While she gained professional experience in manufacturing and engineering, she continued to follow global affairs and became active in CISV's programs again. Growing more aware of the imperative need for social impact initiatives worldwide, she decided to switch to a career that allows her to apply her skills in solving humanitarian based problems. Her first experience will take her back to the Middle East as a Kiva Fellow in Jordan where she hopes to make a tangible positive impact in the local community. She is ecstatic to continue her fellowship in Lebanon and Sierra Leone!