This blog post was co-authored by Jeff Nelson, KF20 Guatemala and Matt Bastone, KF20 Nicaragua.  We recently met-up on Jeff’s home turf in Guatemala to witness one of the most important religious holidays throughout all of Latin America: Semana Santa.  We were inspired to write this post because, well, it was an amazing experience and an important tradition in many people’s lives. 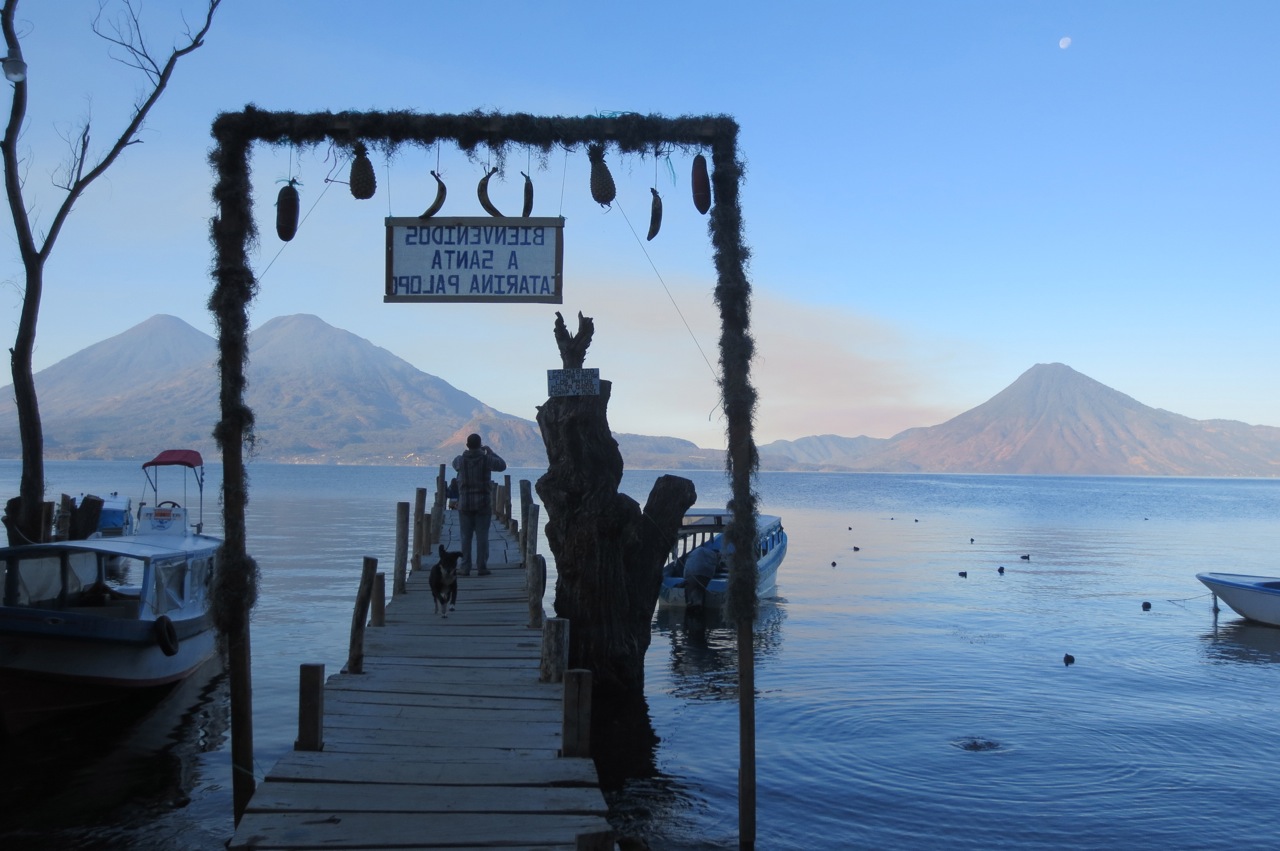 Photo taken in the Guatemalan town of Santa Catarina Palopó, which is situated on Lake Atitlán. In the background are the Atitlán, San Pedro, and Tolimán Volcanoes.

Semana Santa, or Holy Week in English, is a biblically inspired tradition that takes place during the last week of Lent before Easter.  The traditions celebrated throughout Latin America are a lasting visage of Spanish post-colonial influence.  As we experienced in Guatemala, the church community goes to great lengths decorating and preparing for the symbolic tribute to the life and death of Jesus.  This memorial week draws attention and reverence from all levels of society, and thousands gather to experience the unique atmosphere. 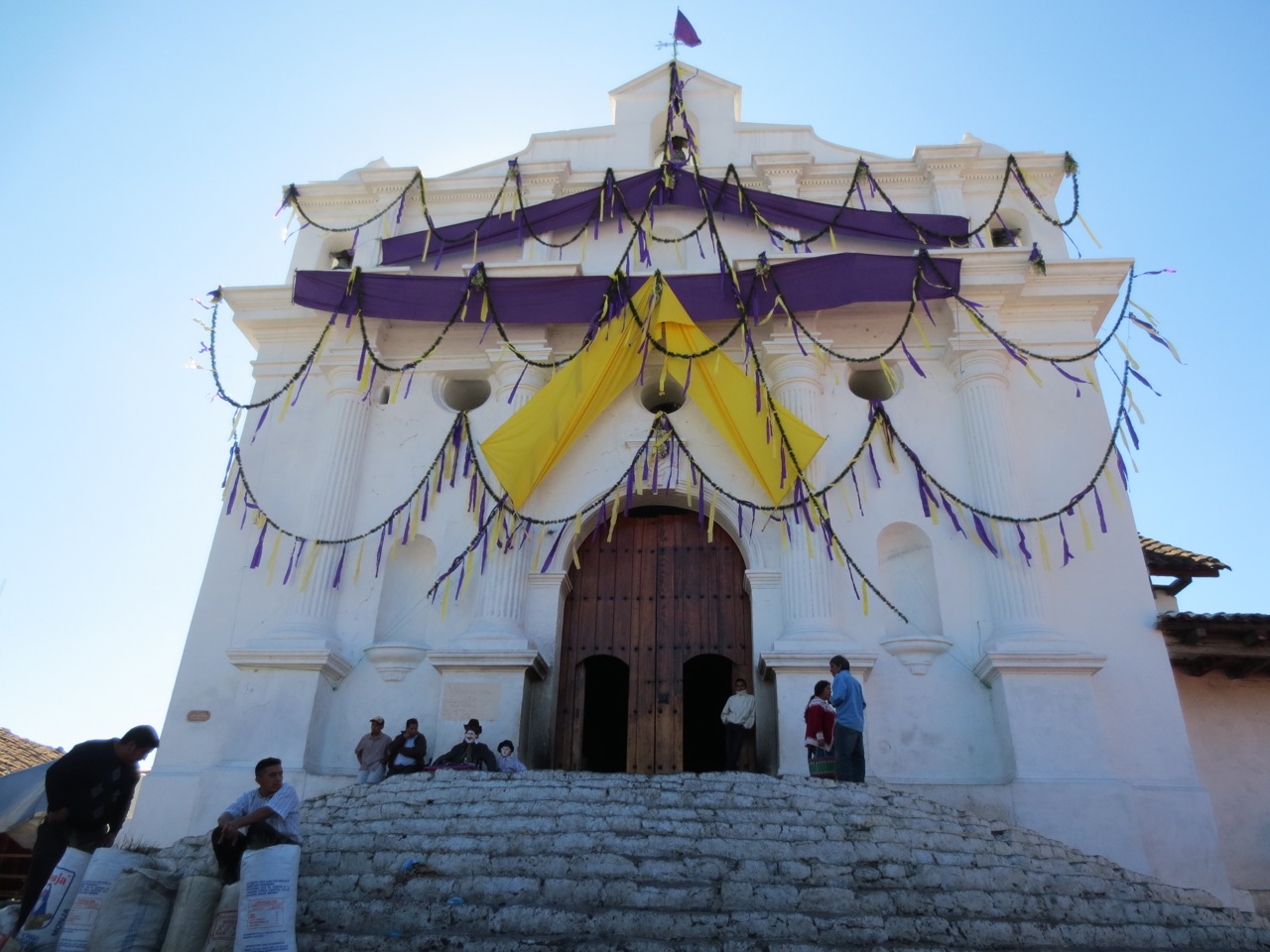 The week begins with Palm Sunday, which commemorates Jesus’ entrance into Jerusalem when people placed palm branches in his path.  Some Christian denominations, including the Catholic Church, bless palm fronds and give them to the congregation during Palm Sunday services. 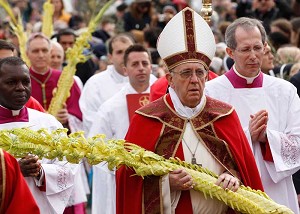 Later in the week, Maudy Thursday (or Holy Thursday) commemorates the Last Supper.  This was the last night Jesus spent with his Apostles before his crucifixion and death.  The act of Jesus washing the feet of his Apostles was a symbolically important occurrence on this evening.  In the Bible, Jesus says “Now that I, your Lord and Teacher, have washed your feet, you also should wash one another’s feet.  I have set you an example that you should do as I have done for you” – John 13:14-15.  This humble act was an illustration of Jesus’s commandment to love one another.  In Latin America, many Catholic services on Holy Thursday will include a reenactment in which a high-ranking priest washes the feet of 12 common people in representation of the 12 apostles. 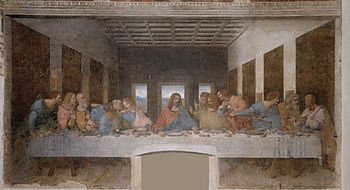 Famous depiction of the Last Supper by Leonardo da Vinci

On the following day, known as Good Friday, we were lucky enough to visit the beautiful Guatemalan town of Antigua.  Traditional processions are a big focus of Holy Week festivities, which culminate on Good Friday – the day of Jesus’ death.  The daylong drama begins early in the morning, when preparations are made for the mock trial and sentencing of Christ.  Some residents dress as Roman soldiers, Pontius Pilate, and other characters in the story. 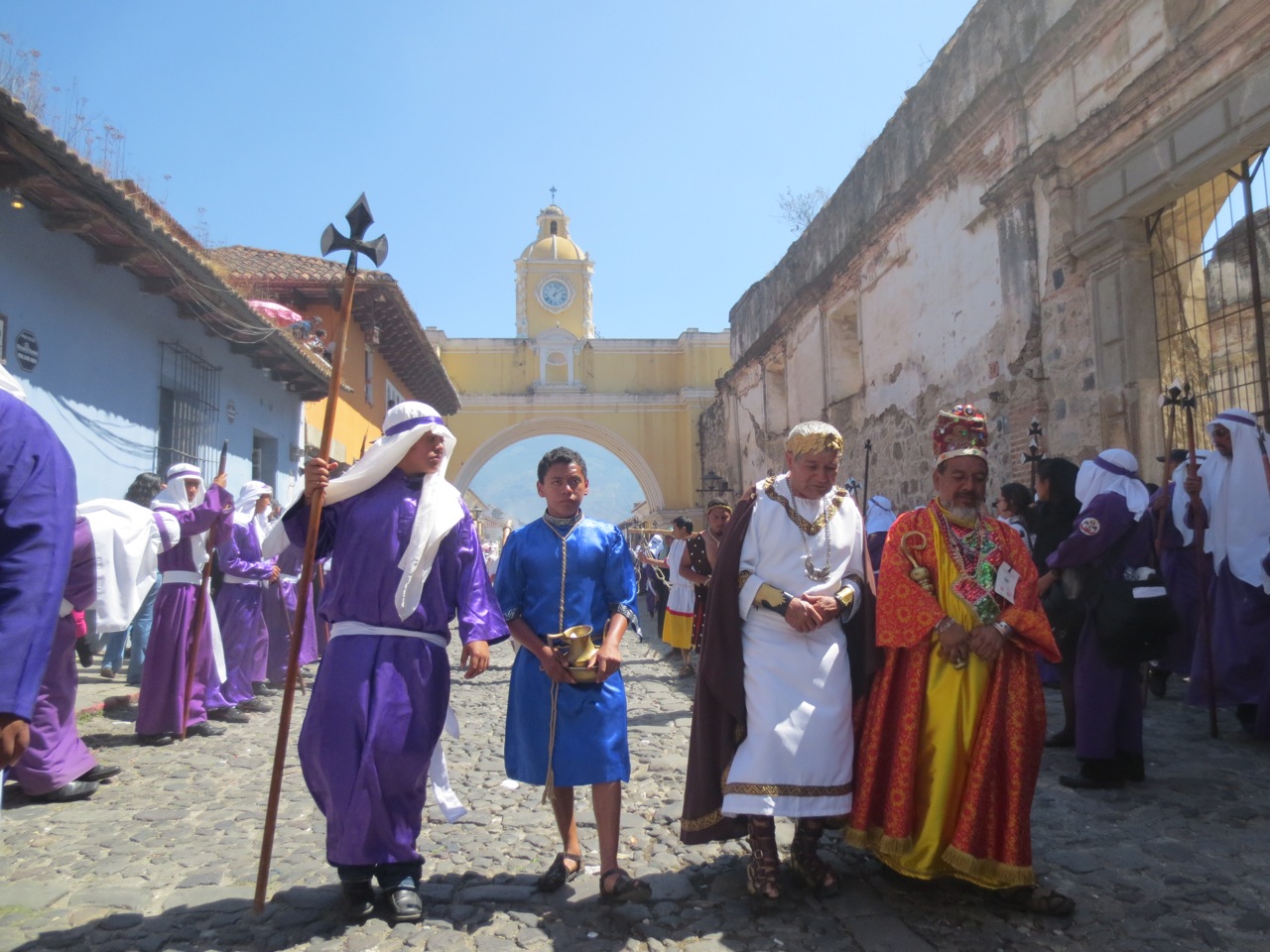 Processional with Pontius Pilate, the judge at the trial of Jesus who authorized the crucifixion

Hundreds of Antigua residents volunteer to usher huge wooden floats throughout the city streets.  You can hear the ominous booming music and smell incense of the procession long before the carriers and the float arrive.  Carriers will carry the float for a block and then a new group will take their turn. 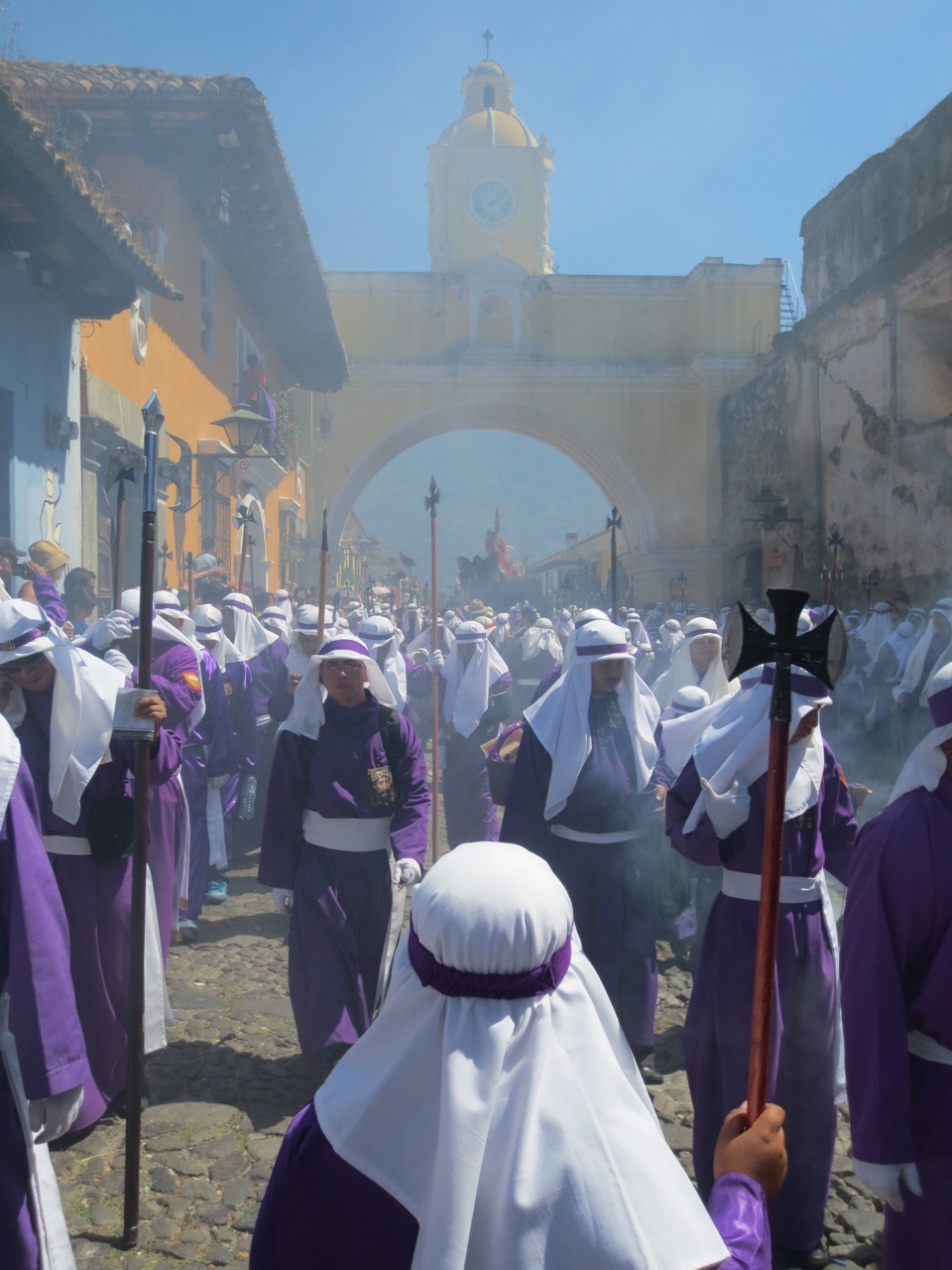 A procession arrives in the distance amidst smoke from burning incense

In order to be chosen to carry one of the floats, or andas, you must register at least 2 years in advance.  Ushers, or cucuruchos, take turns carrying the float based upon their shoulder height to keep the float balanced.  The massive wooden floats can weigh up to 7,000 pounds, so balance is crucial.  Many of the sculptures used during Semana Santa date back to the 16th and 17th centuries, with some carved by local Guatemalan artists. The processions are a very moving experience as the church grieves the death of Christ and remembers his life of humble service.  In a post-colonial culture of persistent suffering and turmoil, these processions remind residents of a divine solidarity amidst the struggles of this world. 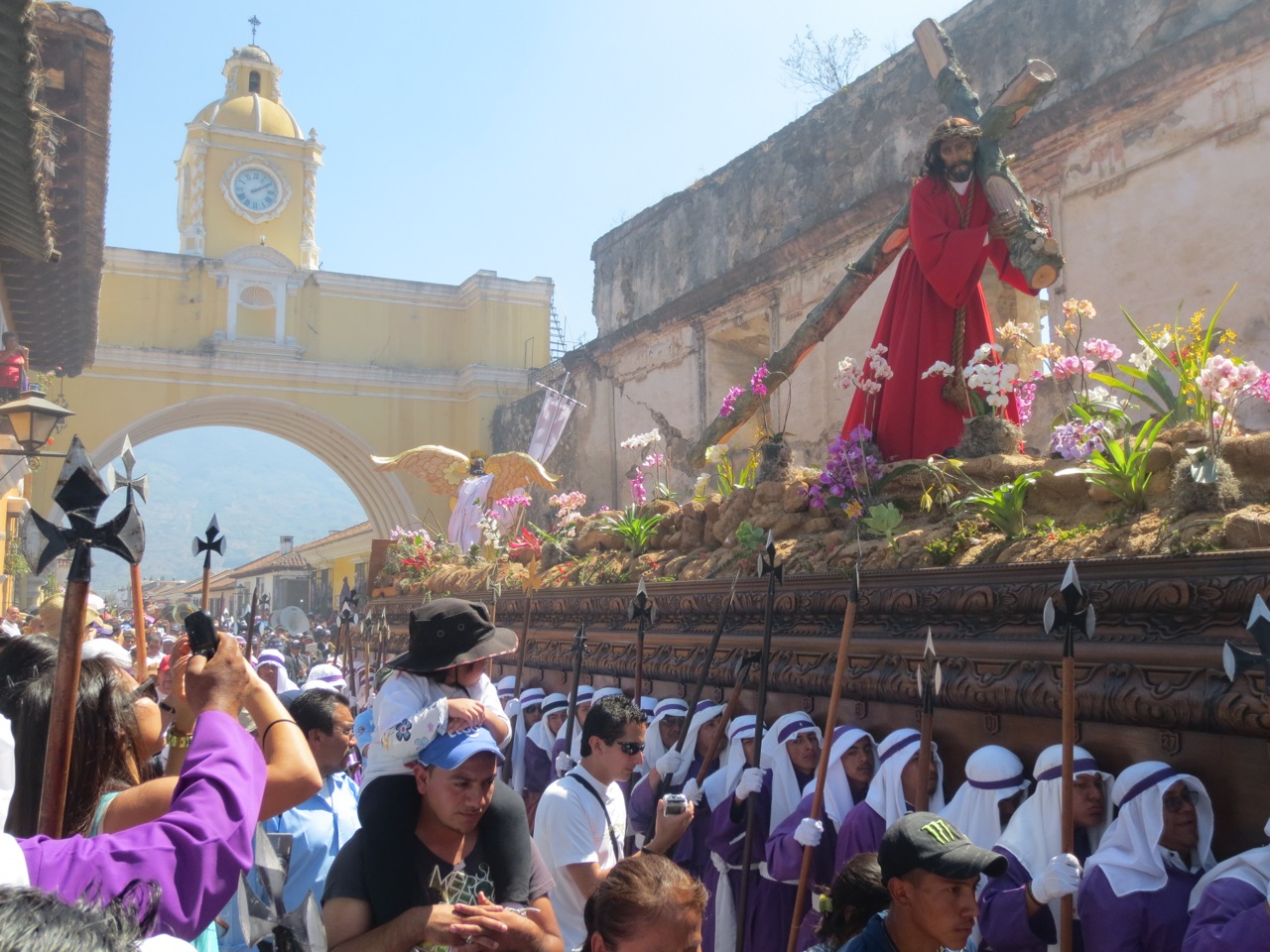 The procession depicting Jesus carrying the cross before the crucifixion

In the same way, women carry a float that commemorates Mary, the mother of Jesus. They willingly carry the burden of this float to symbolically share in Christ’s day of suffering. 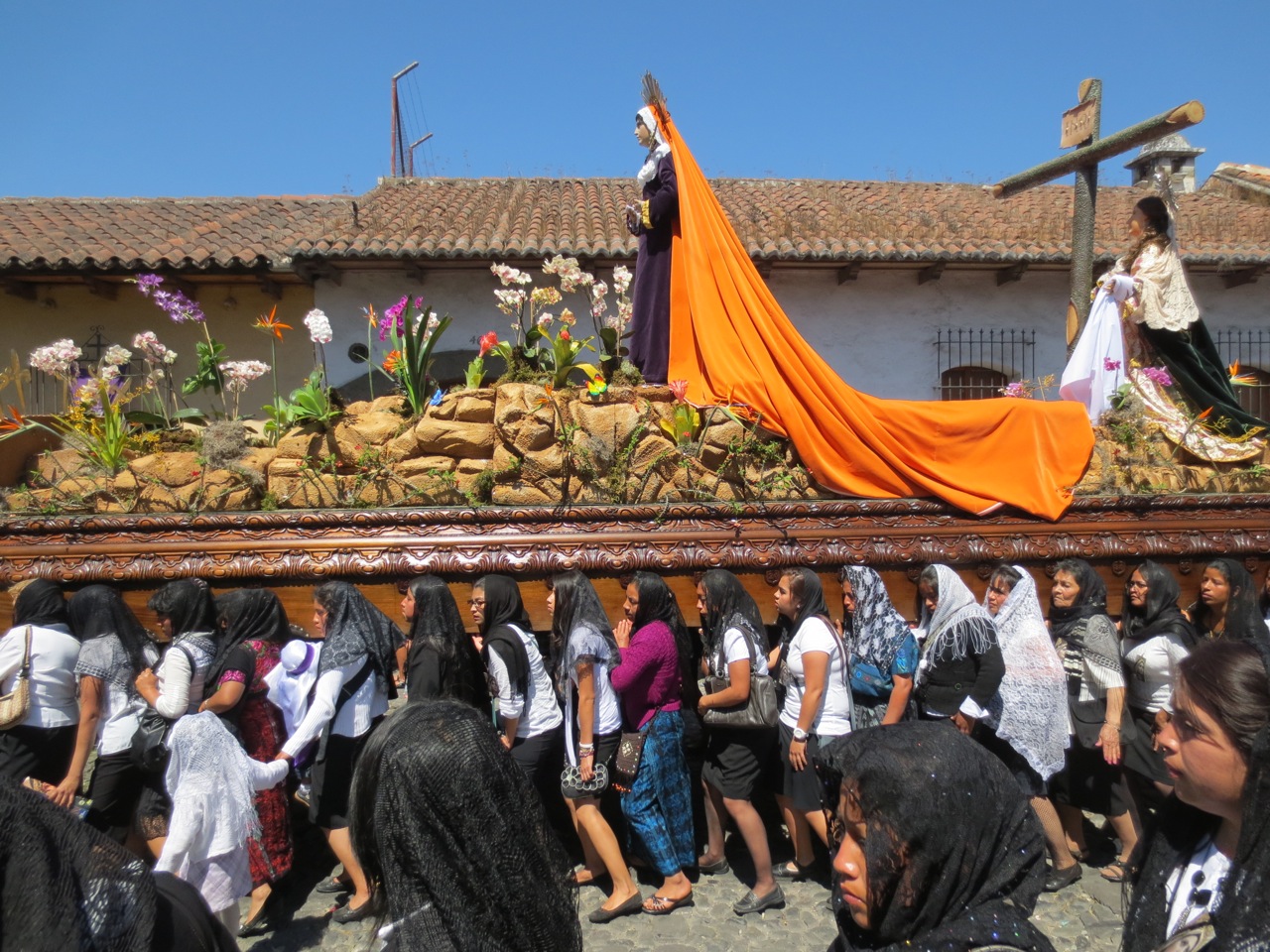 Women carrying a float representing Mary, the mother of Jesus

In Guatemala, there is a special emphasis on natural art, specifically sawdust rugs or alfombras.  Mass amounts of sawdust is dyed into a variety of vibrant colors.  Using large stencils, the sawdust is intricately arranged on city streets during Semana Santa to blanket the path of the regular processions. 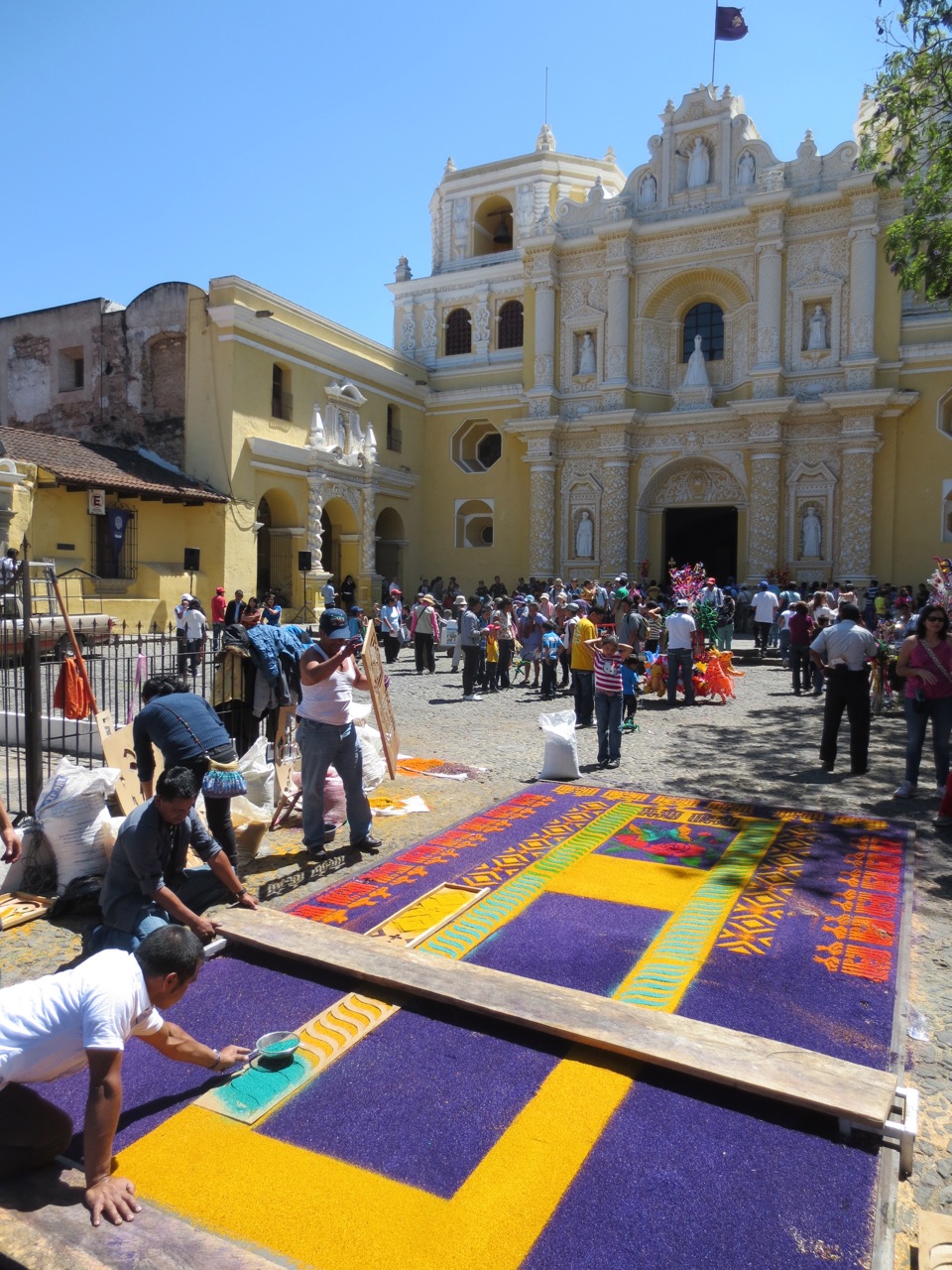 The elaborate rugs take hours if not days to create.  In fact, many work throughout the night to prepare for Good Friday’s grand processions.  The rug construction is planned so that the carpets are finished just before the procession arrives. 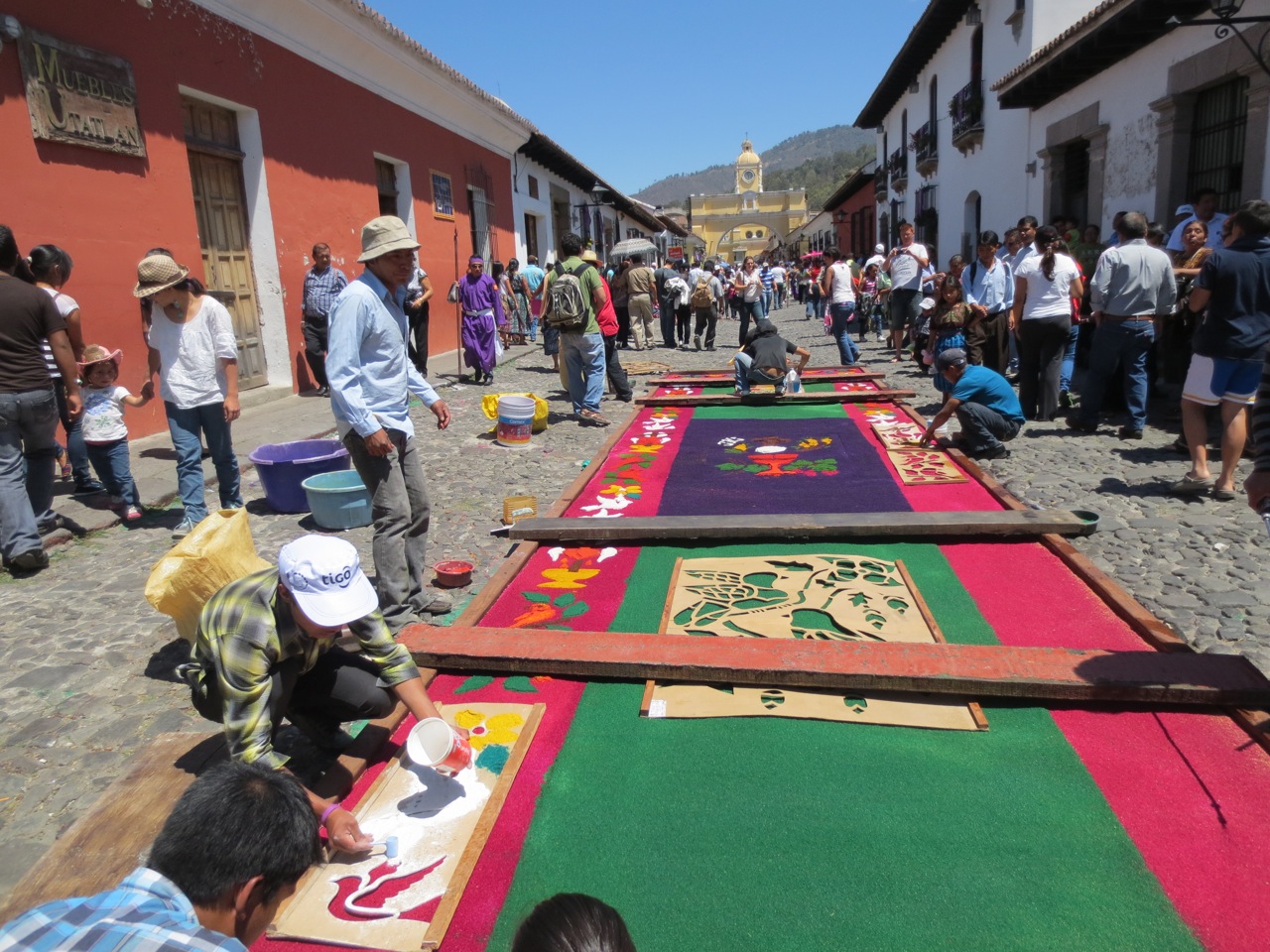 Another sawdust alfombra being created on the cobblestone streets of Antigua 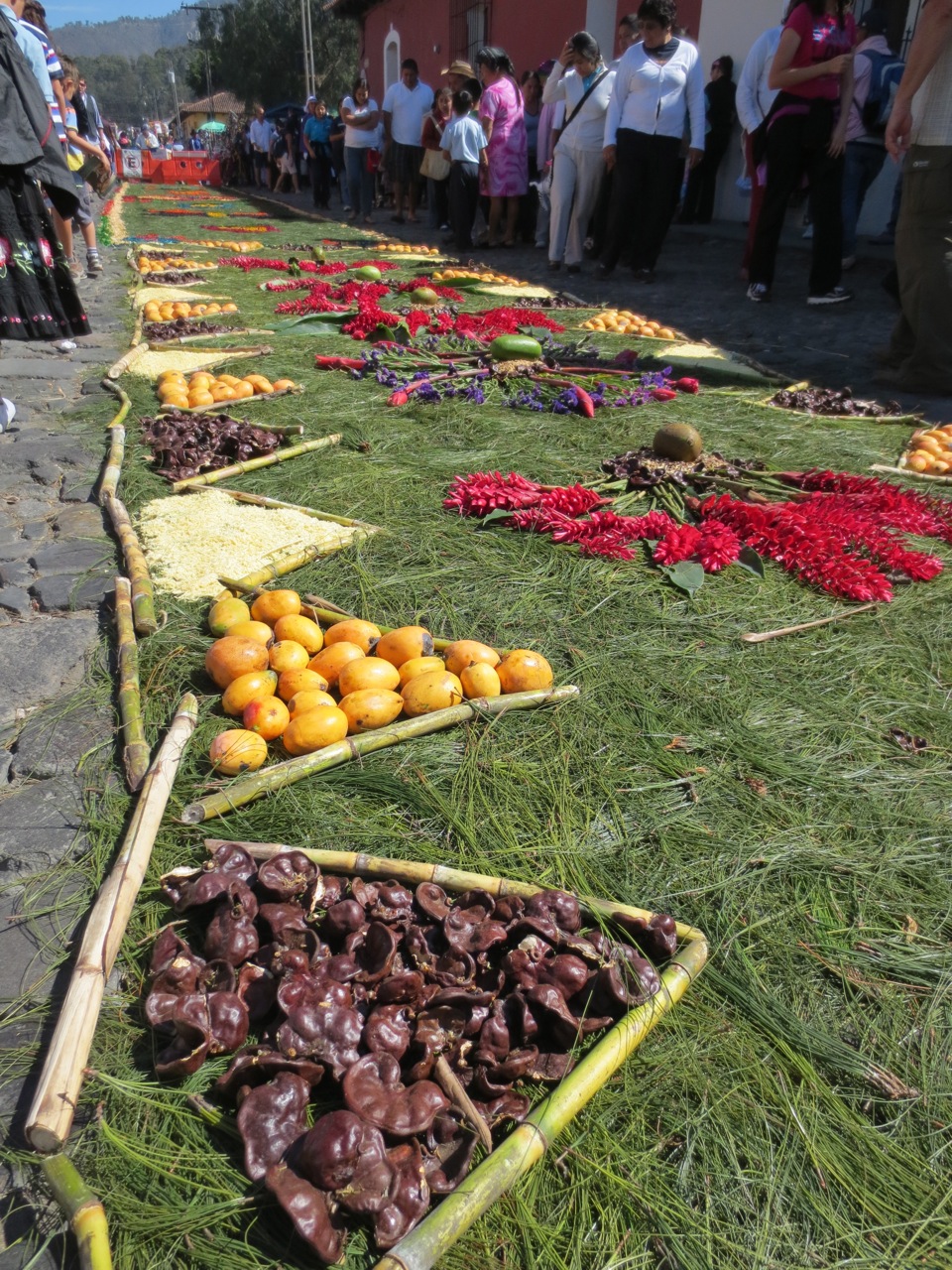 Not all rugs are made of sawdust - pine needles, fruit, nuts, leaves, flowers, and many other things are creatively used

After the procession passes over, the trampled sawdust is cleaned up to prepare for another rug and procession soon thereafter. 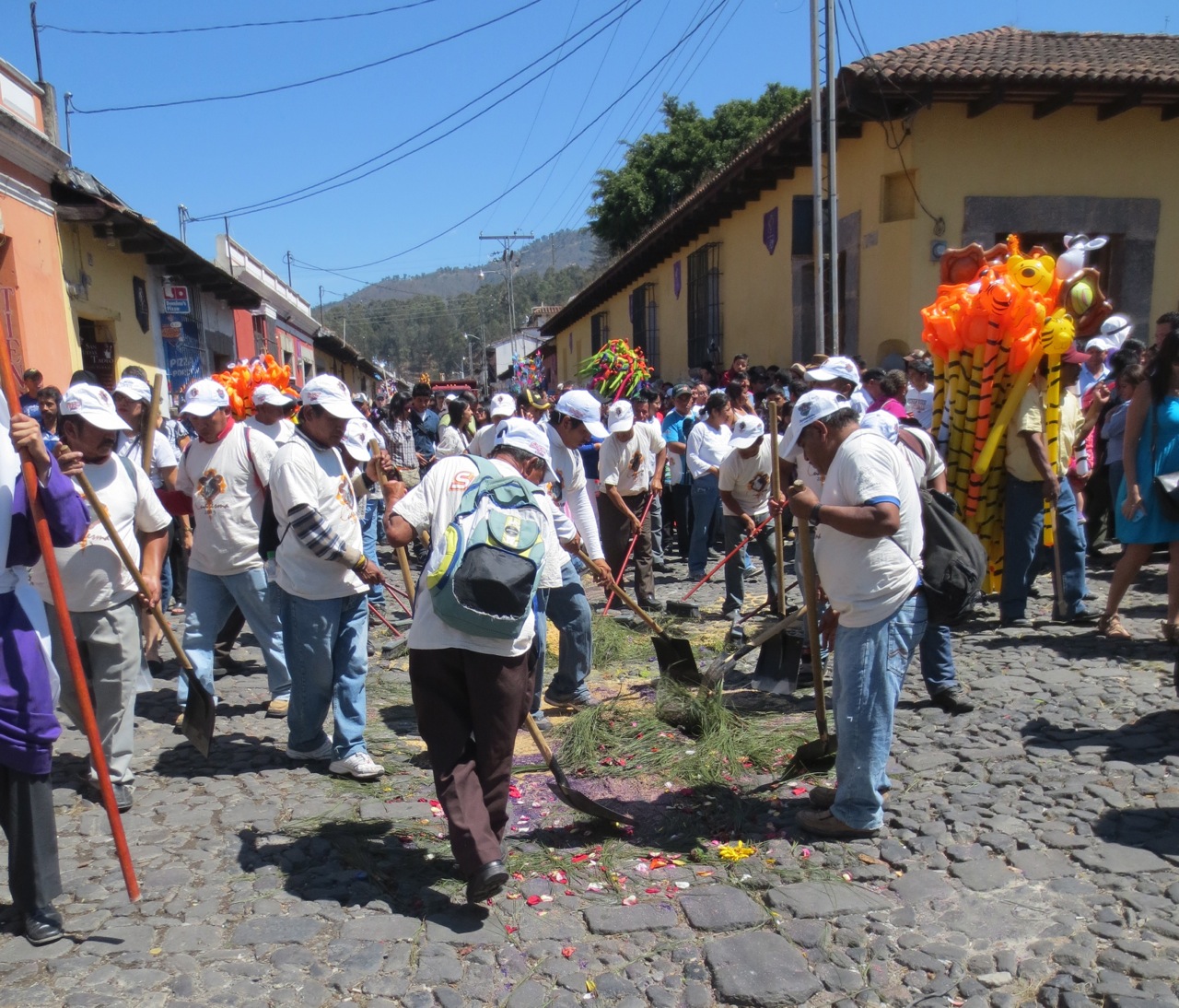 Workers cleaning up an alfombra after a processional

The week comes to a close on Easter Sunday, which is one of the most important days of the Christian year.  Easter celebrates the resurrection of Jesus on the third day after his crucifixion and the theological significance of this event is the foundation of the Christian faith.  Through the sacrifice of his only Son, God forgives the sin of the world, so that despite their inherent faults, people who have faith in Him will have eternal life in heaven.

Here is a quick video summary of Semana Santa from Jeff's video journal with elementary students in the states. Enjoy! 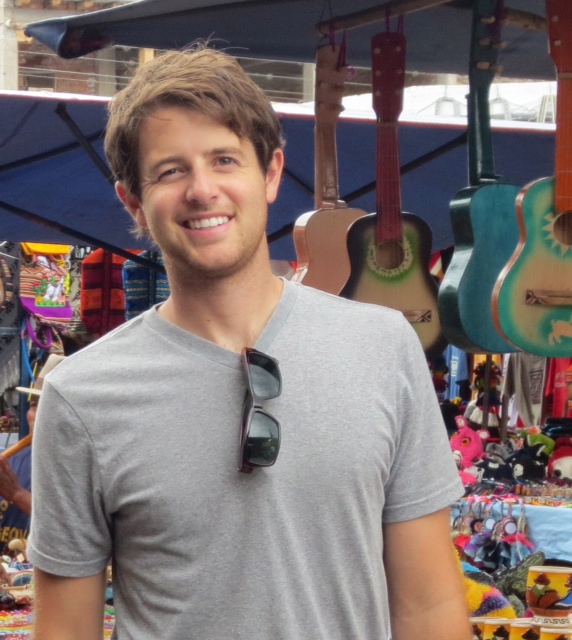 Matt is extremely excited to join the Kiva family. He is fascinated by the sustainable manner in which microfinance is used to alleviate poverty and how Kiva has used technology as a conduit for reaching people across the world. Matt is in pursuit of a career in microfinance and believes it suits him well given his professional background, Christian faith, and passion for leveraging innovation to help others. Matt was born and raised in Southern California and graduated summa cum laude with a business degree from Cal Poly San Luis Obispo. He is a CPA and began the first three years of his career with Deloitte serving clients in a wide variety of industries and gaining valuable experience in technical accounting, internal control theory, and project management. Since his time at Deloitte, Matt has gained finance experience through roles involving budgeting, forecasting, modeling, strategic planning, and process improvement implementation. Matt loves to travel and has most notably backpacked through Europe and spent an extended period of time in South America learning Spanish. He enjoys being active and particularly loves playing soccer, golfing, surfing, and snowboarding. Matt is humbled by the opportunity to take an active role in furthering Kiva’s impact.