One Dollar Per Day, A Beginner’s Guide (Part 2)

This is the second in a two-part series. To read Part 1, please follow this link.

……..So what does a life based upon one dollar (or 1 and a quarter or two) per day really look like?  That’s mainly what I ask myself.  Beyond that, how does one go about living on one dollar per day?  Could I personally live on one or two dollars per day?  In all fairness, I should probably say that I’ve never actually tried, nor do I have any real desire to do so (I suspect I’m not alone on that one).  I mean I do try to keep things relatively “simple” on the average.  I go from point A to point B on two wheels rather than four.  I afford myself very few “luxuries” such as new clothes or cutting edge electronic devices (nope, no smart phone for this guy.  Mine is ignorant at best).  Come to think of it, I’ve all but stopped going to any restaurant that charges more than four or five dollars per entree.  But despite such “drastic approaches” to life, even my modest rent of two dollars and fifty cents per day automatically disqualifies me from the official dollar per day club.  Throw in another five or so for food, one for gas and another for such things as phone and internet, and I’m not even close to the cutoff.  Based upon those numbers alone, I’m living a life of luxury.

According to most statistics, however, nearly half the population of Nicaragua IS living on less than two dollars per day.  How do they do that?  What does that actually look like?  (taken from Part 1)……..

Too Cool for School:  Actually it has very little to do with being “cool” or “not cool”.  Rather, it has a great deal to do with a variety of cultural and economic factors at play within the society.  Not unlike the medical care from above, public education is free in Nicaragua.  That being the case, though, school uniforms, school supplies and school books are not.  These factors, combined with the fact that many children are asked to contribute to the daily income (remember the first point), prevent them from entering the school grounds on a consistent basis.  As one can imagine, as such a culture is passed through the generations, a belief in the value of such an education is lost.  Statistically speaking, only 50 to 70 percent of elementary school aged children graduate from the 6th grade.  Far fewer find themselves donning that cap and gown to participate in a formal ceremony ending with a diploma.  All in all, if I’m counting on my dollar per day to lead me toward a fulfilling educational experience, I may be a bit disappointed.

Working for the Man:  So I’ve mentioned this idea of everyone sharing the burden of bringing home the proverbial bacon.  What I haven’t mentioned, however, is how one goes about making such a contribution.  Pulling from yet another statistic, Nicaragua has an unemployment/underemployment rate of about 50% (in the past, it has been as high as 70%).  In other words, roughly half the population is without a “formal” job.  That doesn’t mean that these formally unemployed individuals are necessarily sitting on the front while watching the traffic and drinking the local beer.  For example, in the “garbage dump community” where I spent several years, many people spent at least a portion of their day sifting through the trash.  The idea was to find any type of material that could be reused, resold, or recycled for a small recompense.  Such individuals were certainly performing some type of labor for at least part of the day.  It’s just that they weren’t employed by the formal sector.  Digging through garbage; selling various goods at the intersection; even staking a claim on a given corner and asking for personal donations; all are common unskilled jobs that are prevalent methods to earn a dollar or two per day.  On the other hand, so is running a small business out of your home.  For this reason a number of small business owners that receive Kiva loans are, technically speaking, unemployed.  The good news is that they are generally able to earn more than one or two dollars per day. 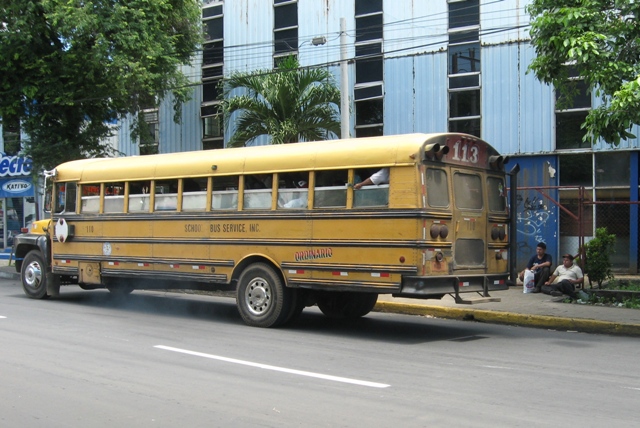 Catching the Bus in Managua

And the Walking Man Walks: Remember that two wheeled form of transportation I mentioned before?  For me, it works quite well.  It was relatively inexpensive to buy, it’s relatively inexpensive to maintain, and it’s relatively efficient to run (that 50-60 miles per gallon comes in especially handy when gas is $5 or $6 per gallon).  As an added bonus, I can park it in the living room, foregoing the need to pay for overnight parking or own a garage.  All in all, it’s basic, it’s simple and it’s practical.  OK, so it may be slightly less practical during the rainy season, but you get the point.  To the dollar per day community, however, it’s often considered an embodiment of luxury.  I used to find myself in frequent conversations regarding transportation.  I would ask someone if they were familiar with a different area of the city.  More often than not, if the area was across town in any direction, the answer was NO.  Eventually I realized that among the numerous limitations faced by this community, transportation was on the list.  The bus system in Managua is really quite affordable.  A roundtrip fare runs about twenty-five cents.  Twenty-five cents?  That’s all?  That’s all.  But if twenty-five cents also happens to be twenty-five percent of your daily budget, you may think twice about packing yourself into that overcrowded, sardine-can-esque, black smoke belching, yellow monster that began its career by chauffeuring North American school children in 1979.  Taking the two to five dollar taxi is absolutely out of the question.

So what are you left with?  Well, of course there are the intermediate options of bicycles or something involving livestock.  The most economical option, however, remains to be one of human power.  Sure you may increase your expenditure in the “caloric” sense, but barring any unforeseen assaults or robberies, the dollar in your pocket will remain unaffected.

Papa Needs a New Pair of Shoes:  We’ve already touched on two of the big three, food and shelter.  Now it’s time to turn out attention to clothing.  Like I said, I don’t get too crazy in the personal indulgence department, and as a result my wardrobe is kept at a minimal.  A couple of years ago, however, the holes in the knees of my one pair of jeans got to the level where they were threatening to cause a spontaneous conversion to that classic summer icon known as the “jort” (or…jean shorts).  Since drastic circumstances called for drastic measures, I made a quick stop by the ATM and headed for the local mall.  By the time I left, I was the proud owner of a very basic pair of jeans.  Unfortunately, I was also carrying $65 less in my pocket.  $65?  For a really basic pair of jeans?  That’s what I said too!  Hmmm….let’s see.  $1 per day…..that’s $365 per year…..a pair of jeans for $65….that’s….ummm…..OK, I think I’ve got it…….a mere 18 percent of one’s annual income.  That sounds good, yea?  Well, as you can probably imagine, the mall isn’t going to be the best option in this case.  Fortunately, there are others.

Shopping in the Neighborhood

Of course there is the occasional donation that makes its way from some originating destination, through a local NGO, to the community.  But more commonly, if I’m living in a dollar per day community, I’ll most likely clothe myself by purchasing from one of the individuals passing through (or living in) my neighborhood.  Here’s how it works:  First, used articles of clothing from other parts of the world (remember that land of plenty I mentioned before?) make their way to the city’s central market.  These articles are grouped into piles according to their perceived value (condition, brand, etc.) and packed into large canvas sacs.  After being sold to an intermediary (side note….some of the local Kiva borrowers make a living at this level), the clothing from these sacs are distributed and sold in the neighborhood.  Although costs can certainly vary, a pair of pants or simple shirt will generally cost between $1 and $5.  If I’m doing what I can to stretch my dollar, this option, aside from that generous donation, is probably going to be my best.

Calling It Quits:  And with that, I think it’s time for this how-to manual to come to an end.  There are, without a doubt, additional topics that could be explored.  There’s the method of reducing the monthly bill for basic services (water and electricity) by performing a “self-installation” (and, of course, the subsequent advertising campaign of “hey, please don’t steal the electrical lines” by the local power company).  There are always the numerous social issues involving addictions, abuse, exploitation and violence that are all too prevalent in such communities.  That one in itself could take us into numerous volumes.  Instead, I’ll just end with this:  According to the United Nations, $1-a-day Poverty Line is the international poverty line for absolute poverty set by the World Bank in 1990, and adjusted for various purchasing power parities. People living at or below this level are said to be in extreme poverty.  Target #1 of the Millennium Development Goals is to half the percentage of people who live on less than $1 per day.  If you ask me, that sounds like a pretty spectacular idea.