Lending to refugees, or giving authors pens: Learnings from the Nakivale Refugee Settlement

“They are free to farm now.”

Those were the succinct but thought-provoking words our driver, Eddie, uttered as we entered and passed by some of the communities living in the outlying areas of the Nakivale Refugee Settlement.

Located in southwestern Uganda, the settlement was established in 1958 and is now populated by over 100,000 people. Covering 71.3 square miles, the settlement is home to refugees of 10 different nationalities, including Congolese, Rwandan, Burundian, Somalian Ethiopian, and Eritrean individuals and families. The vast majority of the settlement’s inhabitants came to be there as a result of conflicts in their home countries. Many have been living in the settlement for several years, and some even decades, while more recent conflicts in neighboring countries have increased the daily number of new arrivals at Nakivale. 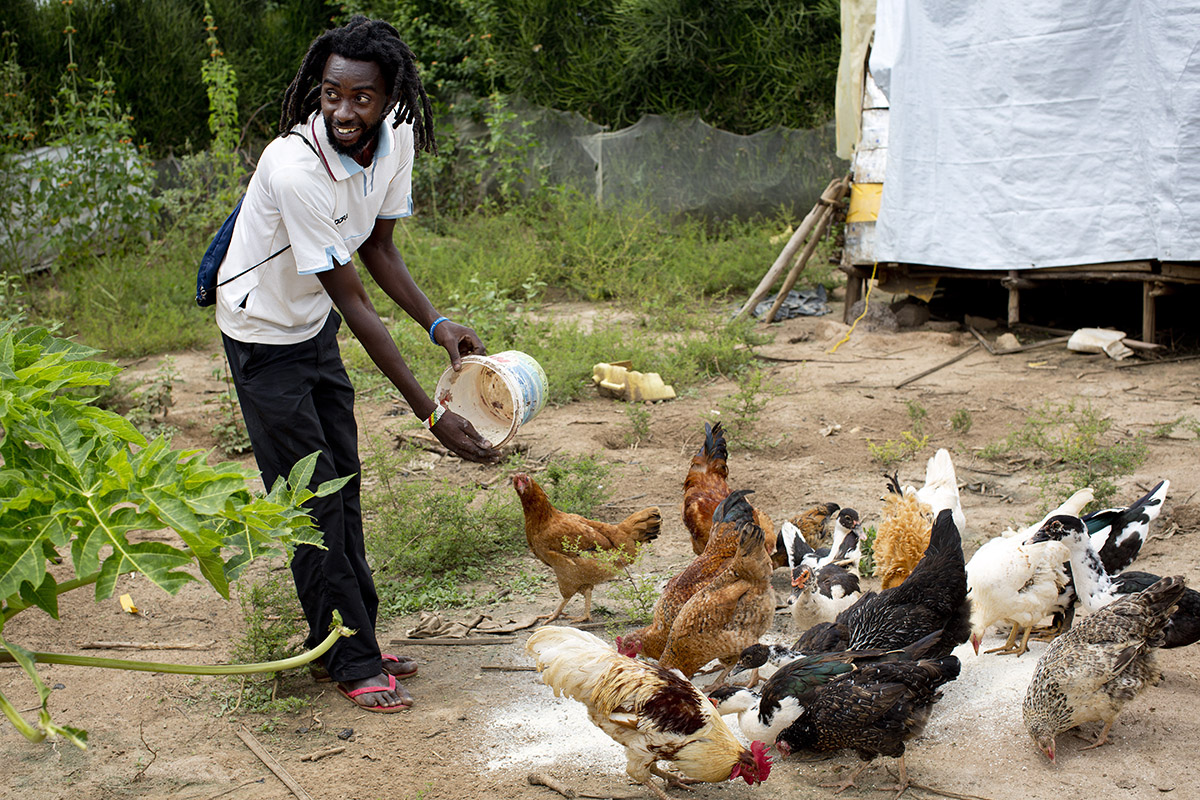 
In February, I spent a month based in Uganda working alongside Kiva’s new partner, The Opportunity Bank (OBUL), which has been striving towards delivering high-impact financial services in the Nakivale Refugee Settlement. During my time working with OBUL, I visited the Nakivale Settlement for 3 days.

Uganda is the largest refugee-hosting country in Africa and has a long history of accepting refugees of all creeds. When I asked my companion, Noah, how this policy came to be, he simply responded, “Ugandans are very welcoming.”

He expanded on that by pointing out that in the past, many of the countries where the refugees are coming from once welcomed Ugandan refugees. So, in a sense, they are now returning the favor. Moreover, pragmatically speaking, the government recognizes that the region is no stranger to conflict. The nefarious hands of war and turmoil have and continue to clutch the Congo, South Sudan and Somalia. Additionally, past violence in Rwanda and Tanzania has still left people displaced. Unlike many governments, which focus on trying to prevent refugees from entering, policymakers in Uganda have sought to proactively manage and organize the inflow of refugees. 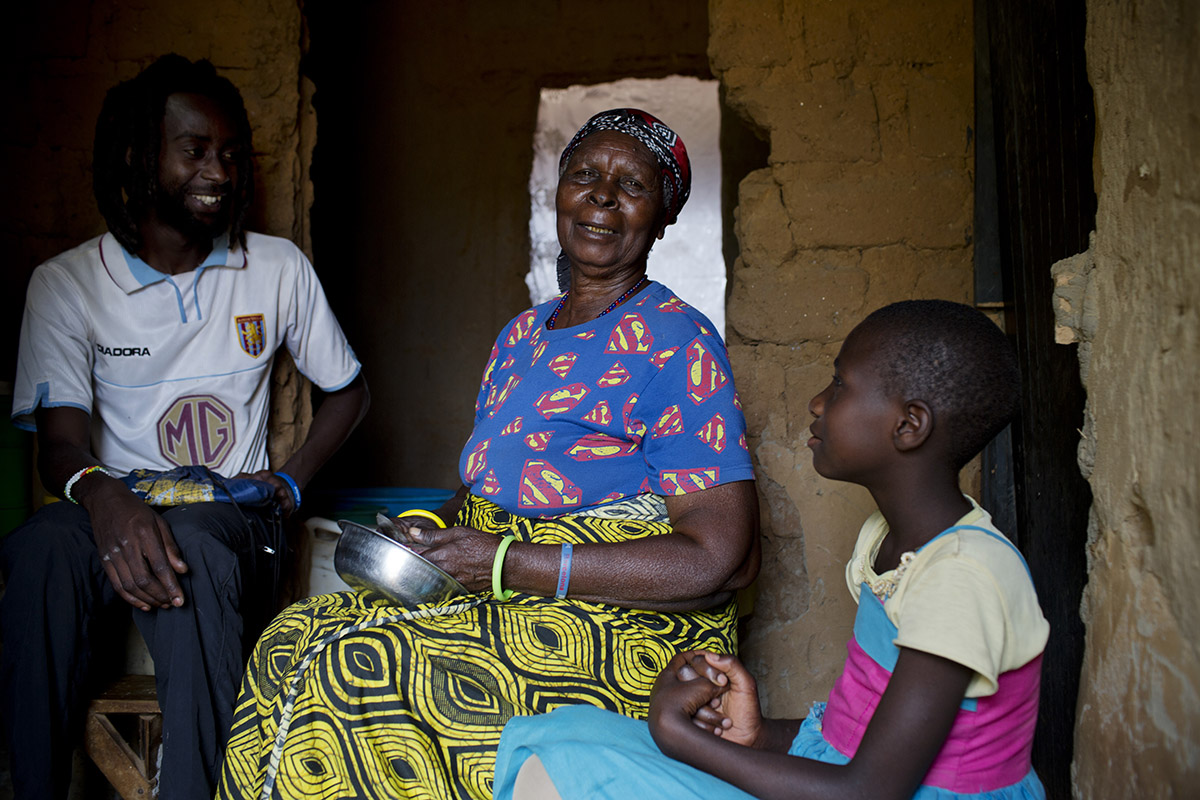 Gentil jokes with his mother.


At the time of my visit, OBUL had recruited and trained 4 financial inclusion officers, as part of their broader strategy to deliver financial services in the settlement. Residents of the settlement themselves, these staff members train other refugees, in groups of 10 to 20 people at a time, on financial literacy.

I came to see that financial inclusion is so much more than simply making transactions such as accepting savings deposits or issuing loans. Over the course of 3 days, I met with many of these groups to hear about how the training has gone and their plans for the future.

The first group I met with, all of which were Congolese nationals, had fled their homes due to conflict. They reported that they were very happy with the training and thankful to OBUL for teaching them the skills required to manage their household and business income.

A woman whose business was selling charcoal said the trainings she attended made her realize that “with time, a small amount of money can become a lot.”


Financial literacy may not always be the most inspiring subject, but it is when providing people a medium through which to regain independence. At the end of the meeting, one member declared: “We are not just refugees. We are writers, farmers, entrepreneurs, builders and teachers… We do not have to wait to go abroad to change and improve our lives, we can start right now.”

Throughout each meeting, I sensed a strong feeling of lost agency among the group members. A feeling that they had lost jurisdiction over their lives. Almost everyone I spoke with individually told me that family and friends of theirs had been killed. I was told haunting stories of violence and survival. However, there was an undeniable drive to not let their traumatic past and ever-so demanding present predestine their future. An indisputable drive to once again become the author of their own real-life stories. 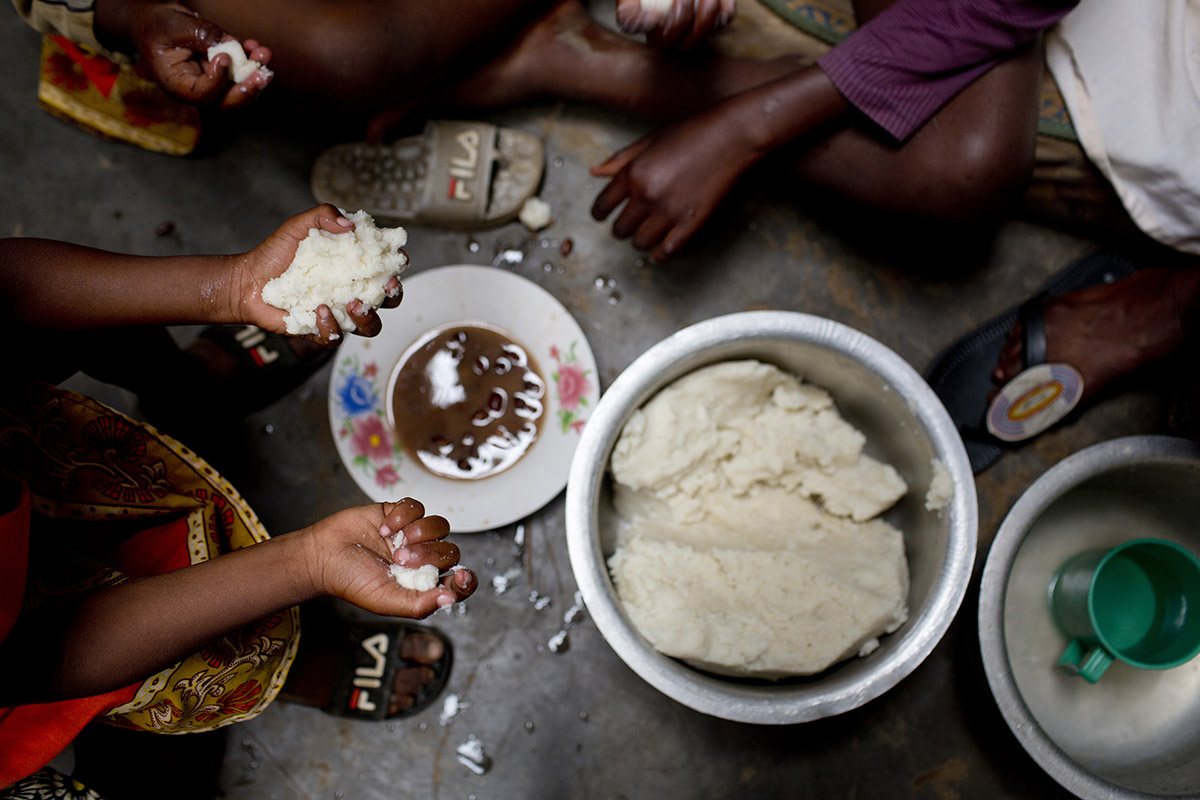 
There are few more innately intense human desires than having the sovereignty to be the authors of our own lives. Having the freedom to be able to make the choices that mean most to us and pursue anything we want so that we might come as close as we can to self-actualization. I came to understand that what the members of each group ultimately desired was to regain their agency, and that financial empowerment is one significant vehicle through which they could realize this aspiration.

The situation in Uganda has become protracted in nature, reflecting the reality for refugees in many parts of the world. As such, addressing their needs must go beyond humanitarian responses, such as providing food and shelter. While these basic services are key, especially early on, today it is also a question of provisioning education, meaningful employment, and economic opportunity. The refugees are eager to contribute socially and economically, which is where socially-motivated financial service providers like OBUL can come in and provide important services to households and entrepreneurs. 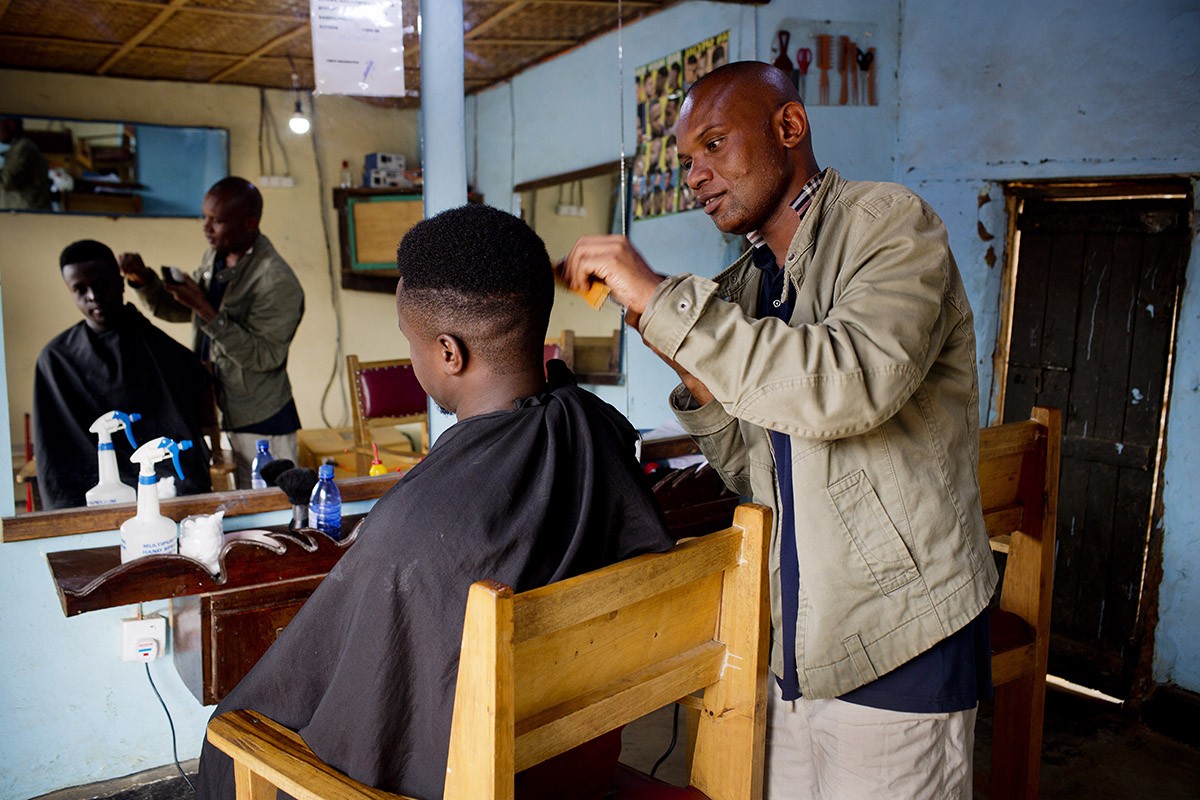 Swedi works as a barber at the settlement.


There was more than enough evidence to suggest that the settlement was buzzing with commercial opportunities and entrepreneurs eager to grow. I talked to a woman who had planted a beautiful garden to host celebrations such as weddings and birthdays. I met with another woman who operated a butcher shop that was paying for 7 of her 12 children’s education. I met a man who started from scratch a payment processing business for people to send and receive money. All three had the same request: loans to provide capital to grow their respective businesses.

Refugees are largely financially excluded, especially those living in camps, as most financial institutions are unwilling to serve them. OBUL is different, however, and working with Kiva they see both the need and the opportunity in Nakivale. I myself saw firsthand that it is home to a broad array of people with a diverse set of needs. I often heard a very strong demand for a wide array of financial products. We met with a group of mothers with mentally handicapped children who asked about business and medical loan products. Another group of women requested more training on how to grow a business and asked for loans on the spot, so that they could buy more sewing machines for their clothing business. 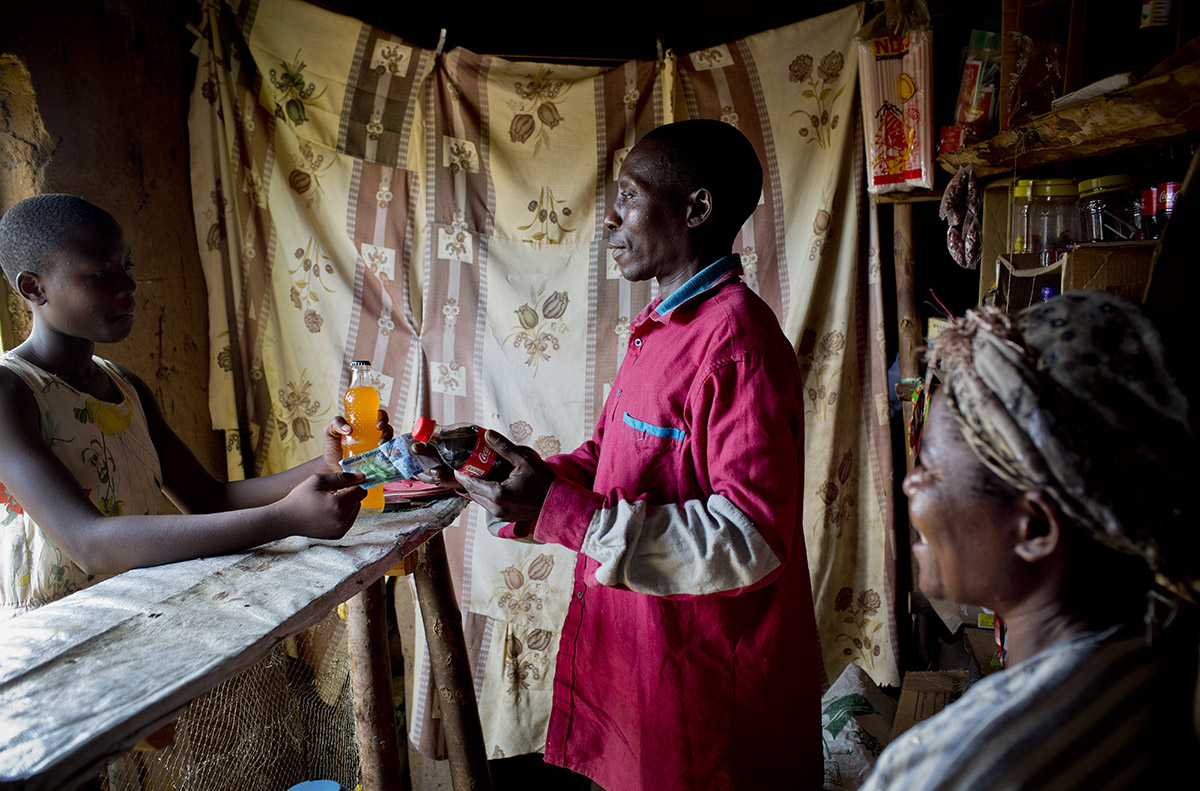 Kakuli makes a purchase from one of the settlement's convenience shops.

For OBUL, the need is clear and they are eager to help. They have big plans for their operations in the settlement. They are looking to recruit six more financial inclusion officers to broaden the scope of their training and build an actual branch in the settlement. OBUL is very excited by the enormous and achievable benefits of aligning their commercial and social interests. Kiva is proud to partner with them to help make this a reality.

In the Nakivale Refugee Settlement, a loan is more just a loan. It is a means through which people may have the ability to once again compose essential chapters of their own lives.


Refugees, asylum seekers, and IDPs need a lending hand now more than ever. Help the world’s most vulnerable individuals rebuild their businesses, homes, and lives by contributing to Kiva’s COVID-19 Response fund at kiva.org/covid19response. 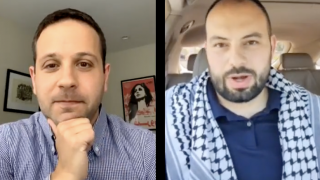 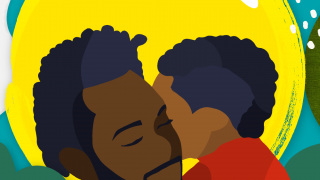 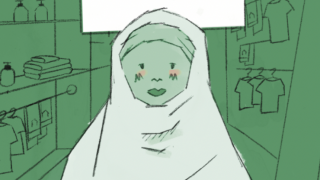