Biodigesters meet the triple bottom line (“TBL”) of people, planet and profit, thereby resulting in maximum impact. They not only reduce energy costs, but also provide a positive environmental and social impact as well. I will briefly explain what a biodigester is, how it works, how biodigesters meet the TBL, and why they can and should proliferate as microloan products, using examples from the field.

What is a Biodigester & How Does It Work?

A biodigester can be thought of as a mechanical stomach. It is a system that decomposes waste (e.g., manure, plant material, food waste, and other biodegradable material) with bacteria in an oxygen-free (anaerobic) tank to create a renewable energy called biogas (carbon dioxide and methane). This biogas can then be used to generate electricity and gas for kitchen stoves with a minimal carbon footprint.

1. Organic Materials. Animal manure is commonly used in biodigesters, though many other organic materials can be used. Yen, a borrower who received a loan for a biodigester from Kiva, uses manure from her goats and pigs (seen below) on her backyard farm for her biodigester. The goat and pig manure is sent to the biodigester tank for anaerobic fermentation. 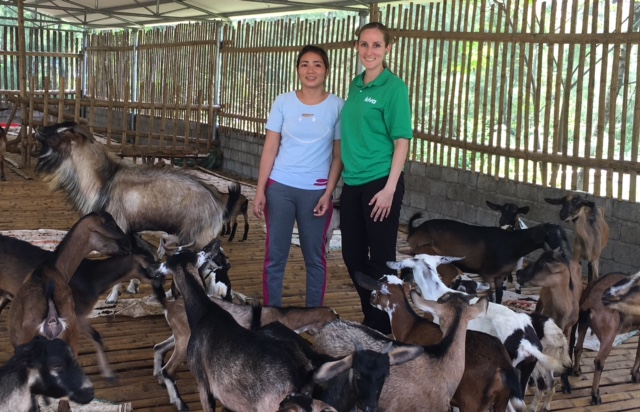 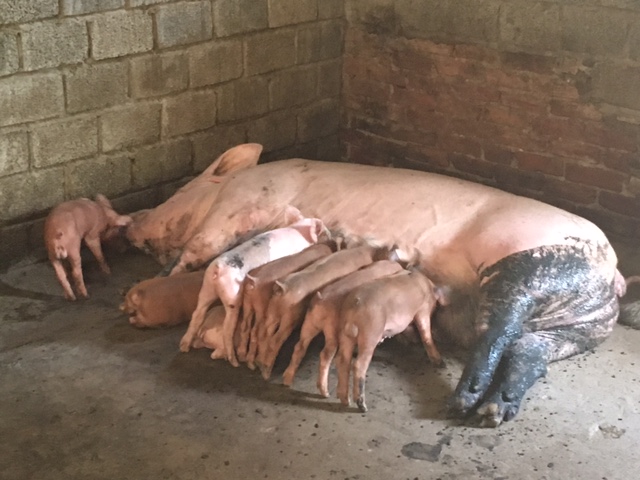 2. Fermentation. The manure (or other biodegradable material) is broken down by microorganisms in closed, oxygen-free reservoirs to avoid methane emission.

4. Energy. This biogas can then be used for many purposes, including, but not limited to, heat, electricity and cooking. Here are some images of Kiva borrowers who have biodigesters that I was able to visit in Thanh Hoa. 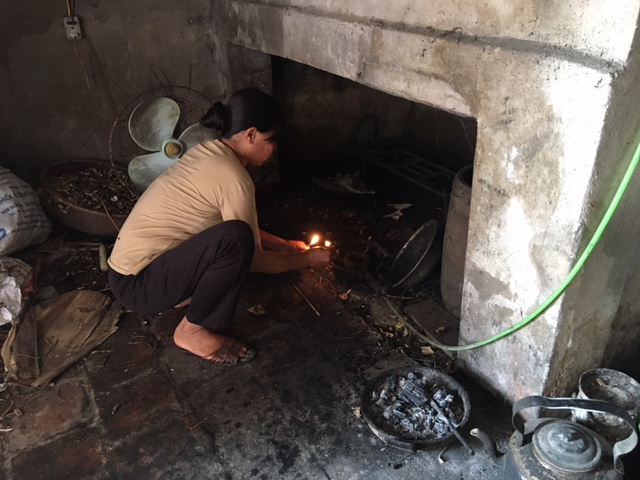 This is Tuyet, a Kiva borrower, lighting the stove to start cooking. The methane gas comes through the green tube on the right in the photo. 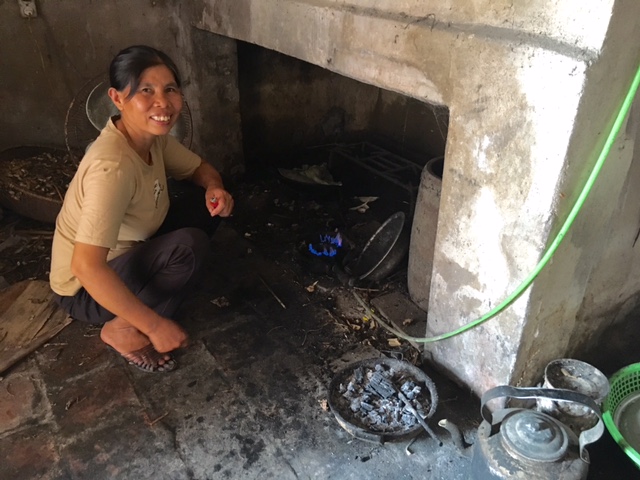 Tuyet has been very happy with her biodigester thus far, as it has saved her money and the stove is easy to use. 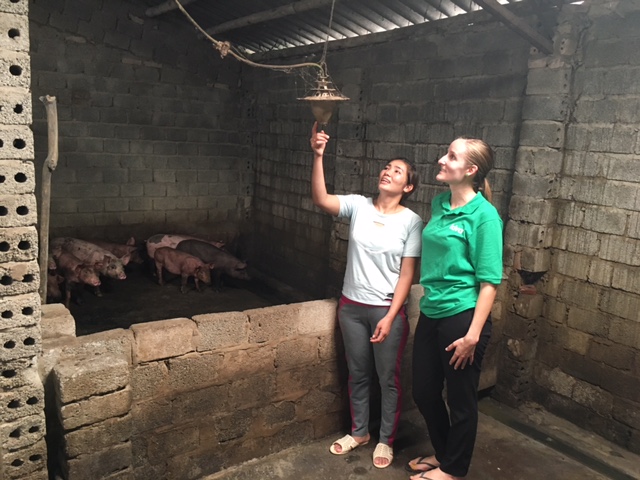 Here is Yen showing me one of her two heat lamps, fueled by the biogas from her biodigester, which she uses to keep the pigs warm. She said the pigs need to stay warm in order to stay healthy. 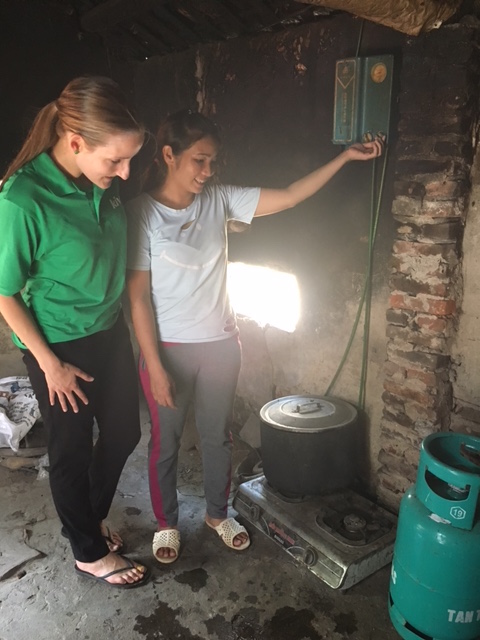 Yen is pictured in the above image explaining the ways in which she uses the biogas. Yen and her family of five have used the biogas for cooking as well as for heat and electricity in her home and on her farm.

How Biodigesters Meet the TBL

In terms of community health, using biogas instead of burning wood or other biomass to cook food or heat a home significantly reduces the number of toxic pollutants emitted into the air, resulting in greater health for people (and animals). This is significant because about 3 billion people, primarily in developing nations, cook and heat their homes using open fires and basic stoves that burn biomass (e.g., wood, animal manure, crop waste) and coal. More than 4 million people die prematurely from illness due to household air pollution from cooking with solid fuels. When I asked Yen what motivated her to purchase the biodigester, she said it was because she wanted to ensure good health for her three young daughters, her husband (who spent the past year sick with a serious illness) and her animals. She had also received complaints from the neighbors about the smell. To be clear: animal manure doesn't just stink - it also releases air polluting ammonia, nitrous oxide and methane.

Biodigesters help borrowers climb out of poverty by reducing their bills and by not burdening them with an excessive loan amount. Biodigester owners save money on electricity and gas bills through the use of animal and other biodegradable waste to produce renewable energy via the biodigester. The Kiva borrowers I visited expressed satisfaction with the cost reduction that resulted from purchasing the biodigester. They also said they felt the loan amount was reasonable and was not a large burden for them to make monthly payments toward. For example, Yen's biodigester cost $725.00 total, which is about average for a microloan. Yen told me she first heard about biodigesters from a neighbor who has a much larger farm and is more wealthy than Yen and her family. Her neighbor recommended the biodigester to help her save money in the long run while maintaining the health of her family and animals.

While biodigesters are not the only solution, nor the perfect solution, they are a reliable, affordable means by which the poor in developing countries can increase their standard of living while mitigating negative impacts on the environment, their animals and their family. After meeting borrowers with biodigesters in the field, I'm confident word will spread quickly amongst their neighbors and more citizens of developing nations will purchase biodigesters through microloans for maximum impact! 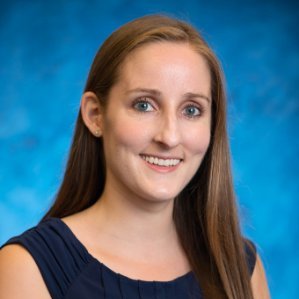 Lisa was born and raised in Southern California. She studied abroad in Hong Kong during her junior year at UCLA, where she graduated with honors and a Political Science B.A. She began working at Fox Entertainment Group, Inc. (Film, TV, and Sports) upon graduating, where she was promoted three times within a five and a half year time span. She has given back to the community through Fox’s corporate social responsibility programs by partnering with myriad non-profits such as After-School All-Stars, Downtown Women’s Center, the Regional Food Bank, Challengers Boys and Girls Club, Mar Vista Family Center and the I Have A Dream Foundation. She joined Fox’s Triathlon Team, through which she fundraised for Children’s Hospital Los Angeles every year through social media, marketing, silent auctions, and partnerships with local businesses. She then began representing and advocating for parents looking to adopt and obtain appropriate benefits for foster care children, also through Fox and in conjunction with Public Counsel, the largest pro bono public interest law firm in the world. She recently became a Board Member of Net Impact LA, a non-profit devoted to maximizing the impact of social enterprises. She is now serving as a Kiva Fellow in Vietnam to further Kiva's mission to alleviate poverty and empower entrepreneurs in under-developed and developing countries.