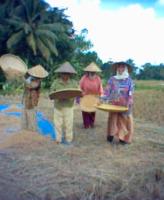 We loan because...
Until now, no credit scheme that has touched the laborer. Banks and private-party governments are more likely to give farmers capital assistance to entrepreneurs.

About us
I am a graduate of high school in Jakarta, in 1996. When I finished school I was accepted to work in a foreign supermarket companies with a BILO. In 1998 I was hit by layoffs, the company hit by financial crisis. To maintain my life trying to become a pedicab driver, motorcycle taxi bike, bajaj driver and courier mail.
In 2000 my mother died. Finally, I returned to my hometown to be with the father who lives alone. This kampong I began to learn traditional way of farming. Until the end I tried to become farm laborers and earn Rp 7.500,- a day. Here a lot of villages see the untapped potential, such as the utilization of agricultural production to increase income communities.
Youth in my community are more likely to seek revenue to the city by becoming a worker in a factory. So many of the abandoned agricultural land or rented to farm laborers with deposit systems. But this system is very harmful because the cost of agricultural production is currently very expensive. The most dominant is the price of fertilizer. Based on this I initiated a program but a cheap farm income doubled. This program included chicken livestock, poultry fish and vegetables. The program is inter-related, such as chicken manure fertilizer can be used as vegetables. While the vegetables are not worthy of sale could be used as fish feed ingredients. To realize the program I tried talking to some community. But all have the same constraints, ie capital. Funds collected from the farmworker is very far from expectations. Finally, I consult with the bank. The result is the bank asked me with a variety of requirements such as security, income certificate, and others. The question is whether that can be used as collateral to the bank for a low-income farm workers and have no land?. This is what prompted me to write a request for a loan to Kiva. This information can be from a student at the Institute Technology of Bandung. And to write this I am trying mentranslate language through google translate. So if there are errors in the writing of thank you beg forgiveness.