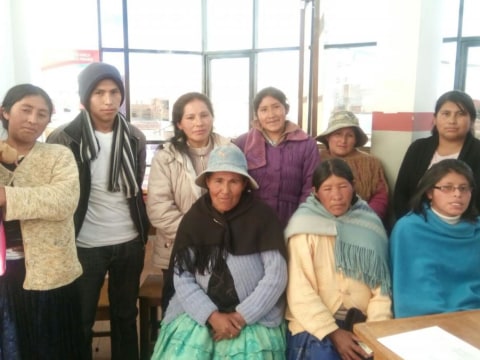 Las Solidarias Group's loan finished fundraising, but these other borrowers need your support

The loan group Las Solidarias will begin their second loan cycle with Pro Mujer as part of Centro Focal German Busch. The group is comprised of 9 members and is directed by a board of which Verónica is the president. The businesses that the members of the group run are varied and include: selling clothes, making and selling clothes, selling fruit, selling vegetables.
The loan they are requesting will benefit the micro-entrepreneurs, including Verónica. She says that this is her first time being a member of Pro Mujer and she joined on the invitation of an advisor for the organization. She currently has a business selling clothes. She let us know that she launched this business some years ago at her mother's suggestion, as her mother does the same. Later, she decided to launch her own business.
The loan that she is requesting now will be used to increase her work capital to buy clothes wholesale from the vendors in Oruro and, later, to sell the clothes in her store.
This form of work enables her to generate income to support her family economically, as she is single and has a son.
When we asked her what she likes about Pro Mujer, she responded that she likes the health information and training that the institution offers.