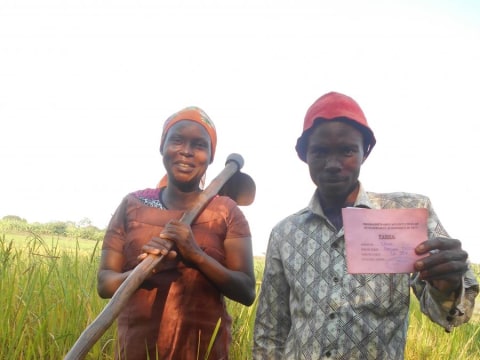 Ruhungo Group's loan finished fundraising, but these other borrowers need your support

A loan helped to pay for labour at harvesting time.

Jean was introduced to rice growing by his parents and neighbours in 2005. This business allows him to make just enough to support his family. His last harvest earned him two-hundred-and-fifty dollars. Eighty dollars were needed to pay costs and his profit was one-hundred-and-seventy dollars.

Due to a lack of funds, Jean is unable to cultivate all his land. However, in the future, he hopes to be able to rent a further three fields which will yield a harvest of several tonnes of rice. This harvest will enable him to pay for schooling for his children and achieve several other goals.

Jean is seen in the photo holding a booklet in his hand.