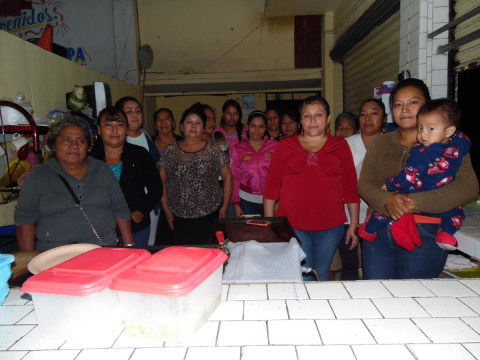 The people born in the port of Veracruz are called "jarochos" but for many residents, the term is more than a localism since it's what gives them their identity and for this reason, even if they weren't born there, they consider themselves to be "jarochos". The cultural expressions form part of their lifestyle since in many towns they share their race with prehispanic cultures which have been preserved throughout history. The reflection of this culture is expressed mainly through its crafts, gastronomy and the "jarocho" Son music and fandango.

In one of the communities, the La Paz group formed whose name alludes to the tranquility of the region. The members are Dora who sells fertilizer, Griselda, Raquel and Analit, food; Ma. Francisca, woven blouses; Erika, sweets; Josefa, groceries; Yolanda and Magdalena, chicken; Maria, sewing; Angelica and Olivia, cosmetics; Lorena and Aracely, catalog shoes; Flora, sewing and Claudia, imported clothing.

Griselda is known by her friends as "La Güera". She has six children of whom only one depends economically on her. Since she became a mother for the first time, she has fought day after day to provide the best quality of life possible to her family. Currently, she has ten years experience under the command of her food business which can be found on the main and most transited street of the town. Throughout all this time, she has overcome many challenges. The main one was perhaps the competition from other traders but the attention of each customer, the variety of food and the flavor will overcome this annoyance.

The income has allowed him, among other things, to provide education to his children and pay his home bills. The loan will be invested in the purchase of flour tortillas, meat, oil, cheese, chili peppers, vegetables, plates, glasses, casserole dishes, sodas and gas. "I am the happiest woman. My children support me with the business in different ways. We work as a team" she happily pronounced by way of farewell.

*The photograph was taken at food stall belonging to La Güera who is wearing a red blouse.