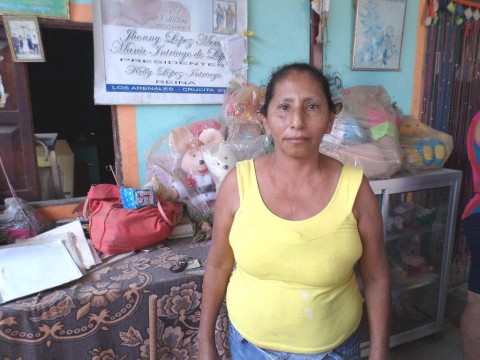 Aura Leonor's loan finished fundraising, but these other borrowers need your support

A loan helped to buy chickens, feed, medicine, and fish.

The Bendición De Dios loan group meets every 15 days in Los Arenales in the Crucita parrish, Portoviejo canton. This place is known for its beautiful beaches that surround the city, which is frequently visited during all times of the year by national and foreign tourists. It is also known for its culinary variety, which is greatly appreciated by the visitors.

Aura, age 53, lives in this place. She is a single mother with four children, who are now grown. One of them lives with her. Aura is a woman who has had to work hard in order to get ahead. She has a small farm where she raises chickens. At times she buys a lot of chickens to raise for two or three months. Then she sells them to merchants or by the pound at her house. Like many people in the area, she also sells 'pinchaguas' [fish]. Every day she goes to the beaches in the area to buy these fish that are very common to the area. She then cleans them at her house, and she treats them with lime. She later sells them in tubs; the public likes this delicious product.

She will use the new loan to buy chickens, feed, medicine, and fish. She has been in the loan group for six years. She is very grateful because she gets ahead with the loans.

Her dream is to enjoy good health.