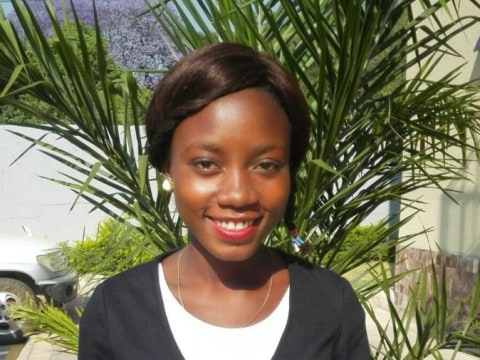 Mervis is 23 years old and lives in a town called Lusaka in Zambia. Mervis is looking to start her own mobile money transfer business and be part of the solution to the financial inclusion problem. which most of Africa now faces.

Mervis grew up in Lusaka and completed her schooling here. Unfortunately, she lost her father when he died suddenly 10 years ago. He was the sole breadwinner and this caused some severe financial constraints for herself and her mother. Her mother was unable to pay for her tuition and as a result, they were separated. Mervis had to stay with distant relatives who assisted her mother by putting her through school. By the time Mervis was reunited with her mother, things had taken an unfortunate turn and her mother fell ill and passed away.

Over and above dealing with the loss of her mother, Mervis is struggling to keep up with tuition fee payments for her three younger siblings, for whom she is now solely responsible.

Zambia is a country that does not see very many female entrepreneurs succeed because society dictates that women should aspire to get married and have children. Girls are taught to aspire to marriage and to make life choices keeping in mind that marriage is the most important. Mervis would like to go against the grain and make a success of running her mobile money transfer business in Lusaka and then she would like to eventually expand into other locations.

Mervis is requesting a Kiva loan to start her own business by purchasing a trading kiosk and having the funds needed to serve people who need to access financial services.