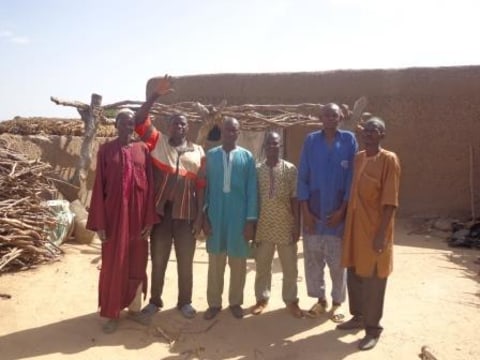 Benkadi N°Ii Group's loan finished fundraising, but these other borrowers need your support

A loan helped to raise sheep for ten months.

Nouhoum is Malian and did not attend school. His hand is raised in the photo. He is a man of principle and takes his work seriously. He has always reimbursed the loans he borrows from RMCR. Aged 48, he is a married father of 11 children; one who is schooled and his wife is a housewife. Nouhoum raises sheep. He will purchase many rams with the loan from RMCR. He supplies himself in the surrounding fairs and resells his rams in town. He has been exercising his profession for more than 7 years. The estimated profit he earns per month is worth at least 20,000 FCA which enables him to provide certain needs to his family, among other things, food, his children's school fees, their clothes and shoes. He is often faced with difficulties of poor sales and the expensive costs of transportation of rams but he usually organizes the trip with his local farmers to meet the challenges.