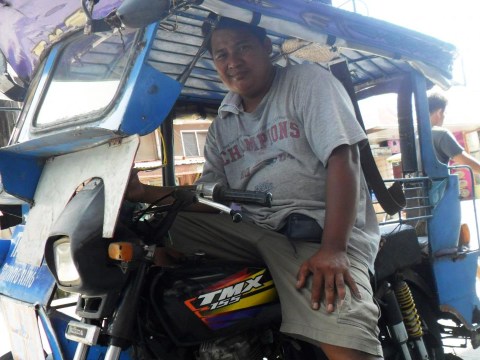 A loan helped to buy spare parts to maintain his motorcycle, as well as toiletries, spices, snack foods, canned goods and drinks for his wife's sari-sari shop and feed for their pigs.

Roy is a driver of a tricycle (a motorcycle with a covered sidecar that seats anywhere from one passenger to as many as the driver will allow). He is a 36-year-old man from the city of Baybay, Leyte. He is married and has two children, 16 and 8 years old. For three years, Roy has supported and provided for his family by driving his tricycle. Aside from this, he is also engaged in raising pigs and his wife runs a sari-sari (variety) store. He wishes in the future to have enough income to raise his family well, provide them food to eat, and have enough money to pay school fees.

Roy is asking for a loan to buy spare parts for his tricycle in order to maintain its good condition. Aside from this, he will also buy varieties of goods such as toiletries, spices, snack foods, canned goods and drinks for their store and feed for their pigs. In this way, he will be able to increase their income and that will help them augment their livelihood.