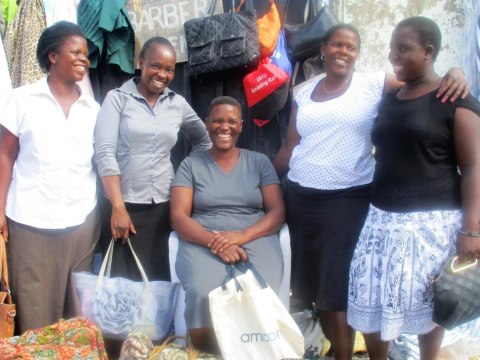 The year 2000 was the dawn of a new millennium, a year that was anticipated and at the same time feared by many. Despite the many fears and dire warnings, this new unique year brought a positive change to the life of one woman. She decided to put aside being just a mother and wife and added businesswoman to her title. In that year Fatima started selling clothing, shoes and bedding by her gate side as an income generating venture.

Fatima is 47 years old and customarily married. She is a biological mother to three children and “mother to her niece who resides with them”. School fees and other expenses are met by Fatima as her husband is only occasionally employed. Fatima uses her good taste in selecting colourful, eye catching beautiful clothing and bedding for resale to residents in her neighbourhood.

In the year 2012 Fatima decided to buy locally and go to Mozambique herself. This she saw as a cost cutting measure and at this stage she no longer had very young children so she could leave for days. She saved USD 300 and used it to go restocking in Mozambique, taking with her seat covers, sheets and different grocery items for resale in Mozambique. This benefitted her immensely as from the 300 USD she invested she made sales of 700 USD. This inspired her to cross more often and she established a good client base for herself. After her stay in Mozambique selling wares, she comes back to Zimbabwe with clothing, curtains, shoes and bedding for resale back home.

Fatima and four other women make up the group Mixed Fortunes and they all reside in a big high density suburb in Harare. With her Kiva loan Fatima is planning to buy bulk groceries for resale and also restock dried organic African food like mopane worms, pumpkin leaves, sugar beans and peanut butter for resale. These goods are in demand as they are healthy and taste good to the African palate. She also wants to stock up on beautiful, colourful cool summer sheets that are very welcome in Mozambique as they experience high temperatures.