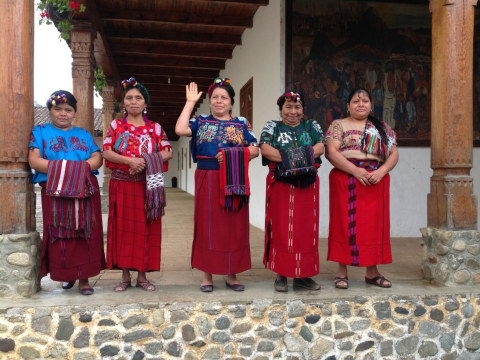 A loan helped to buy thread to expand her tissue activity.

Ana Maria:
When her father was killed he left fourteen children. Ana Maria was eleven years old, and her father and she were traveling to another Guatemalan department when he died. They traveled because there was a fair, and they went to sell maize, salt, vegetables and other products. They carred the merchandise on horses. She and her brother tried to continue with her father's work, but the horses died, so they had to begin working cleaning and preparing fields of neighbors.

Ana Maria is forty five years old, she married at the age of twenty four years. She has eight children, seven female and one male. Two of her daughters are teachers of elementary education, two are in secondary education, and the small children are studying their primary education.

Her husband and she were talking about what to do to improve their income, one opportunity was to take a loan. They did not know about Chajulense Association of Women United for Life, until a friend told her that the loans were given without too many procedures and in a short period of time. She contacted the Association and got her first credit. This year she is getting her fifth credit and will use it to expand her tissue activity by buying thread, and buying tools and wood for her husband’s carpentry.

Ana Maria is the leader of the Group Strawberries 1. The group is composed by six women, all from the Ixil Maya ethnicity. The group will use their loans for Clothing 33%, Manufacturing 33% and Services 33%. On average each member of the group has six children, the average age of the women is 43 years old, 33% are illiterate, 17% studied until second grade of primary education, and 33% ended their primary education. The average amount of their loans is Q5,066.67