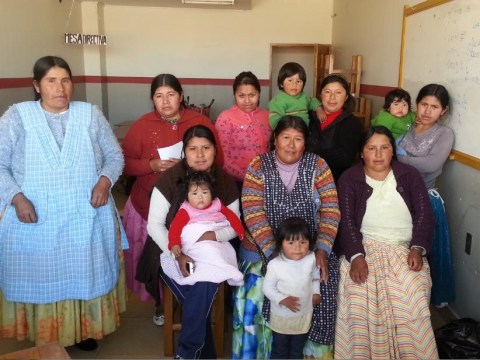 Amistad Group's loan finished fundraising, but these other borrowers need your support

The communal bank "Amistad" will begin its third cycle in Pro Mujer as part of the Centro Focal Panamericana. It is composed of eight members and is directed by a board of directors of which Angelica is the president. The businesses that the members of the association have are various among which are weaving and sales of blankets; food sales; neighborhood store; and weaving and sales of shawls.

The loan they will get will benefit the microenterprises of which Angelica is a part. She indicates the she joined Pro Mujer three years ago, coming in at the invitation of a cousin who is a customer of the institution. Nowadays, she has a business weaving and selling blankets. She wants it known that this is a business that she learned working with an aunt and it's been more than 15 years since she decided to start her own business.

The loan which she will now take out will be for an increase in capital (to buy wool wholesale) which she gets for the saleswomen in the city of El Alto and after the manufacture she will sell in the communities of La Paz. This kind of work allows her to generate resources in order to support her family economically, since she is married and has five children.

When you ask her what she likes about Pro Mujer, she says likes the training that the institution offers.