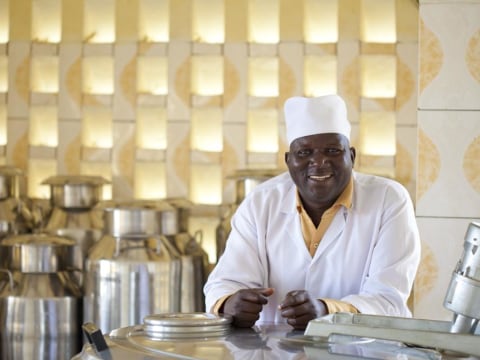 A loan helped To buy a truck to increase capacity at the milk collection center.

Jean Marie Vianney, also known as JMV, is a serious entrepreneur with a big smile. JMV runs a social enterprise in Nyamagabe District, the poorest in Rwanda with some of the country's most severe malnutrition. JMV operates a milk collection and distribution center for the people in his community and neighboring refugee camp. Many families in the district own cows, and these cows often produce more than that family consumes. So JMV buys the excess milk from the families and sells it to people who don't have cows, people in the neighboring refugee camp, and local restaurants. He also runs a program for vulnerable children in the village to come to the collection center in the afternoon for a free cup of milk. AEC has been working with JMV for nearly two years. We started supporting him by giving him a loan for a tricycle to distribute milk nearby the center. Now, JMV has outgrown the tricycle and is looking for financing to purchase a truck. With this truck, JMV will be able to collect and distribute 3 times the amount of milk as he does today. This truck would also allow him to go into more remote places in the district. JMV is one of the most responsible entrepreneurs we've ever worked with. He keeps meticulous records and every week he meets with new potential partners, suppliers and buyers. He hasn't been able to capitalize on as many as he would like, but with this truck he will be able to do so. Thank you so much for your consideration and support for JMV!