The Kiva Games are here! Root for your country of choice by lending. 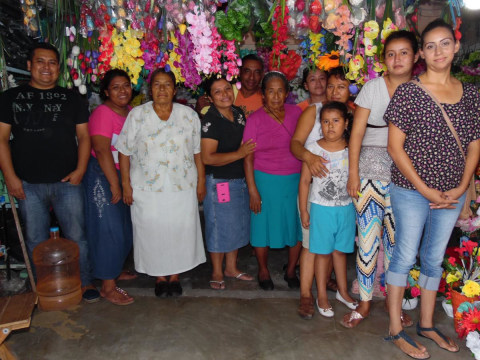 The high temperatures perceived throughout the year in a certain community of Veracruz led the local poets to name it as "the bride of the Sun", the same town where the railroad played a fundamental role in the growth of a former village until it turned it into a small town. As testimony to this is the "pretty black one", as the first steam locomotive is known which traveled the roads of the region.

In one of the colonies, a group got together which is called "Emanuel" because of the faith their members profess and whose meaning is, "God is with all of us." These members are Francisca, who sells artificial flowers; Elba, household products, cosmetics, and jewelry; Joaquín, cell phone accessories; Magali and Itzayana, footwear; Miriam, pastries; Eugenia, jewelry; Algeria, perfumes; Nancy, footwear and clothing, and Mauro, who drives a taxi.

Francisca is a great woman who despite her age continues as strong as an oak. The economic situation that her parents lived didn't allow them to provide her with studies. Nevertheless, her enterprising spirit motivated her to start her business. She sells ​​artificial flowers, still life, fibers, and sponges for washing dishes. At first, Fran, as she is affectionately known, and her husband were walking the streets and neighboring communities of "the bride of the Sun" to offer her goods. After some years, they left this and settled in a fixed location next to the market. In such premises they have remained for 18 years, always offering her customers the best quality and variety of products. "In order to succeed, God must be with us," she says as she smiles.

The loans she has received have reinforced her stability as a trader. She will invest this new loan in the purchase of flowers, still life, leaves, and wire wholesale. With the proceeds obtained, she supports her husband with the household expenses and complies in a timely manner with each of the payments for the loan.

*The photograph was taken in the business place of Fran, who is wearing white blouse and skirt. The girl seen is Magali's daughter.