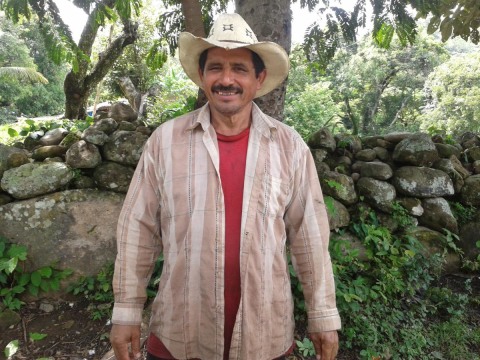 A loan helped to buy compost, pay the rent on the land for his crops, and buy a cow.

Nazario, who is 60 years old, didn't go to school because of the armed conflict that the country was suffering at that time. He married 21 years ago, and he and his wife have two children who go to the school in the community. They have to travel every day from Monday to Friday to arrive at their classes, and they return in the afternoon, sometimes on foot. His wife does the household tasks. Nazario does agricultural work. Specifically, he plants corn, beans, and sorghum for the family, and in addition, when he has good results, he sells another part of his harvests in the city. But in addition to this he works as a day laborer. He has a machine that grinds fodder for livestock, which he also uses in season to obtain income for the family. He learned everything that he knows thanks to his parents. In the past he had to rent, but thanks to his effort and to the motivation of a friend, he has managed to buy a little lot where he built his house. Nazario is applying for the loan to buy compost, pay the rent for the land for his crops, and buy a cow, since he has 7000 square meters of corn and 7000 square meters of beans in the community. Nazario dreams of continuing to work in order to give his children an education and have them complete a university program. In addition, he wants to buy more milk cows in order to work with livestock and obtain other income that will allow better development of his family.