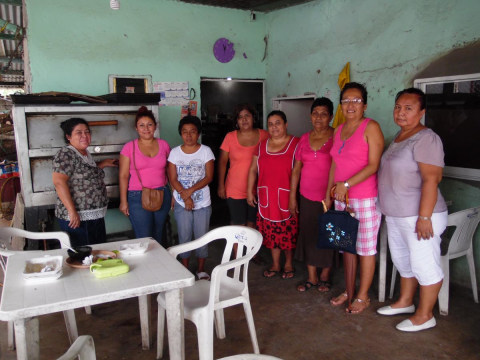 For the majority of residents of a Oaxacan community, living in the country means working in the country, since it is an area devoted completely to sugarcane production. The large organizations where they extract the sugar are called sugar factories, and the season in which sugarcane is harvested is known as "zafra".

In the aforementioned community, a group was formed called Alfa y Omega [Alfa and Omega], whose name implies the beginning and end of anything, that is, the totality. The members of the group are: Julia and Verónica, who sell costume jewelry; Irma, who sells vol-au-vents [baked pastry shells filled with meat and sauce]; Rosalba, who sells clothes; Minerva, who sells tamale; Guadalupe, who sells footwear; Blanca, who sells traditional food; Lorena, who sells motorcycle parts; Juana, who sells groceries; and Virginia, who works in a butcher's shop.

The unity and strength shown by Irma and her husband Miguel is admirable, as they did everything possible so that their son could have the treatment he needed for his health. After learning the recipe to make vol-au-vents, they began selling them door-to-door. They had so much success, that they were able to open a food stall. The vol-au-vents are made on a big table where Miguel makes dough out of the flour, and then shapes it to give it its traditional circular shape. Now, they have several customers who come all the way to their house to taste this delicious dish, fresh out of the oven. Others wait at home for the loaded truck to come by.

Irma and Miguel are especially grateful to VF México for the loans, as they have enriched their business. This time the loan will be useful because they will invest it in purchasing flour, cheese, ham, butter, chilies, bags, soft drinks, juices, meat, and gas.

The money they have earned has been invested in their son's treatment, and in buying an oven, a crate for tacos, tables, chairs, and, 4 months ago, they opened a repair shop. Their dream is to remodel their house, to buy a blender, and to build two shops for their businesses, thus creating a legacy for their grandchildren.

* The photograph was taken at Irma's house. She is wearing a black blouse with gray polka dots and a blue denim skirt.