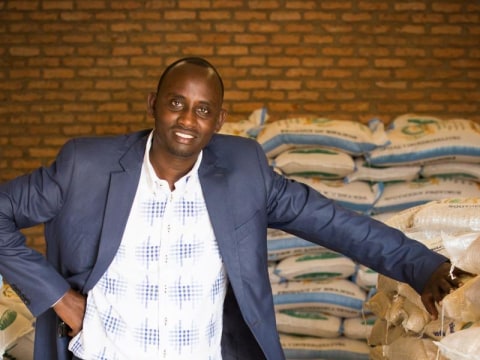 Jean Bosco's loan finished fundraising, but these other borrowers need your support

A loan helped To work with 2000 additional small holder farmers for the October harvest.

Jean Bosco is doing it! He is growing his business season by season and his hard work is paying off. Two weeks ago, Jean Bosco became AEC's first 5-time successful borrower. He started with a $10,000 loan, increased to $25,000, and just paid off his $50,000 loan. With each successive loan, Jean Bosco has been able to generate more profits and grow his business. He is now operating above 75% capacity. We expect that within two more seasons, he will be able to operate his existing business fully without the need to take on debt. Last week, Jean Bosco was given the opportunity to grow even more. Three additional rice cooperatives, working with about 2,000 small holder farmers, signed an agreement to supply Jean Bosco with more paddy rice. These cooperatives previously supplied one of his competitors, but the cooperatives were so impressed with the technical agronomy support that Jean Bosco provides that they switched to him. To work with these new suppliers, Jean Bosco needs a short-term loan of $40,000 to finish out the remainder of the year. Like his previous loans, we expect that he will repay his loan fully and on-time, if not early. Jean Bosco is so confident in his ability to repay, that he has already submitted a check in the full amount dated November 30, 2015. Again, we are so pleased to support this amazing entrepreneur, and we are so thankful for your support of this loan. Jean Bosco is an exemplar in Rwanda. He is pushing his country forward, and we are honored to be with him every step of the way.