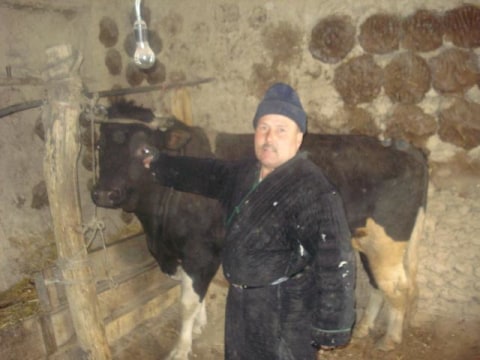 Islom's loan finished fundraising, but these other borrowers need your support

Islom G. was born in 1962 and is married with two children. As an aspiring and hard-working man he has always dreamed of achieving success in whatever he does. Thus, when he joined IMON International last year, he was able to make much progress with his previous loan, which he invested mostly in crop farming. Then, he saw a new business opportunity: the rearing of young cattle, which is very profitable because of the constant demand for meat at the market.

Given this loan, Islom will purchase young cattle and feed for them to expand his business. He plans to use the profits from his business to educate his children, improve the structure of his home, and improve the standard of living of his family.

Tajikistan is perhaps best known for its rich history, which includes a key post along the Silk Road; for the end of Alexander the Great's rule; and for its famous great thinkers, philosophers, scientists and poets, like Rudaki, Ibn Sina (Avicenna), Firdousi, Omar Haiyam, Jomi, Mavlavi Rumi and many others. The country is home to communities that still speak the ancient Sogdian language, epic mountain passes, and a civilization that dates back to the 4th millennium BC. And, even today, it is a complex mixture of the Islamic faith, Soviet culture, New West culture and Central Asian traditions.

Since December 2007, IMON International has worked closely with Kiva and Kiva lenders to ensure that poor and low-income clients represent a viable business proposition. Funds raised through Kiva have already been distributed to thousands of IMON International's clients and will continue to provide thousands more with permanent access to the varied financial services they need. To learn more about IMON International's work, please visit: www.imon.tj