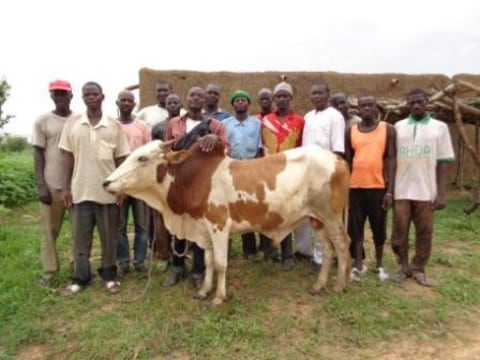 A loan helped to buy cattle to resell after raising them.

Amadou Hamidou is the man who has his hand on the cow standing in front of the group. He comes from Mali and is 42 years old. He lives in the countryside with his wife and his five children (four boys and one girl), aged 5 to 15 years old, of whom two boys are enrolled in school. His wife is a housewife.

Amadou Hamidou earns his living by raising cattle, which allows him to have a monthly profit of 12,500f CFA per head of cattle. He buys and sells his cattle in the local markets.

After 10 years of experience in raising cattle, he has turned to RMCR so as to have a loan to be able to buy several head of cattle and livestock feed in large quantity, to develop his cattle-raising business. He thinks he will sell his cattle in the markets of the big towns so as to make more profit and pay for the studies and the medical expenses of his children.