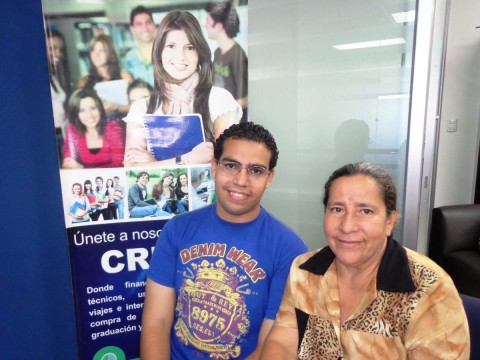 Ana Belinda's loan finished fundraising, but these other borrowers need your support

A loan helped to support her son Cesar so that he can to be a food and beverage technician and chef.

Doña Ana is 55 years old, and she lives in the capital city. She is a wife, the mother of two children, and a grandmother. She has been working as a social worker in a primary school for nine years. She and her husband have fought to provide for their family in an honest and humble manner, as like in every home, difficult situations have always arisen, and this has been a unifying factor for the family.

Doña Ana decided to continue supporting her youngest son, age 20, in his university studies, as her biggest dream is to see her family prepared and competing in the job market, doing what they love the most. Her son Cesar earned a degree in Computer Technology, graduating with 90% average, and currently, he is beginning his university studies in the culinary/food and beverages field. That is why his mother is giving him economic support so that he may complete his studies without any problems.

Cesar comments that every sacrifice his mother makes means a lot to him, as she is an older person, and she has worked all her life in order to give the best to her family. That is why he has found temporary employment as an administrative assistant in a high school in the capital. He says that his income is not sufficient to cover his tuition, but it absolutely helps, along with the income that his mother has set aside in order to be able to support him with his educational loan.

Cesar tells us a little about all the qualities that make him exceptional, unique, and irreplaceable: he has always been honest in every situation; he is patient in the face of adversity; he is faithful to his friends, to his family, and first and foremost, to God. He is sympathetic and kind, he has a gift for serving and solidarity, and he is punctual. He likes to spend time with other people and he prefers teamwork.

Being able to undertake something new each day is a great motivation for Cesar, as his degree will enable him to be a professional chef. And, he is sure that this will help him to improve his family's quality of life.

He wants to contribute to his country by creating a company capable of generating many employment opportunities for young people like himself, and for people who fight to achieve their goals.

Cesar recalls his uncertainty and lack of direction in choosing a vocation to study, but his decision was made the moment he realized how many people are suffering from hunger in the street every day, and that there are many children who have been abandoned by their parents and have nothing to eat. That is why his love for culinary art grew, and now he is very happy with what he has decided to study.

Cesar wants to graduate, learn other languages, work, and be able to establish his own business. First and foremost, God will always be the center of his achievements, and he wants to dedicate his profession, and convert it into a means of supporting poor boys and girls.