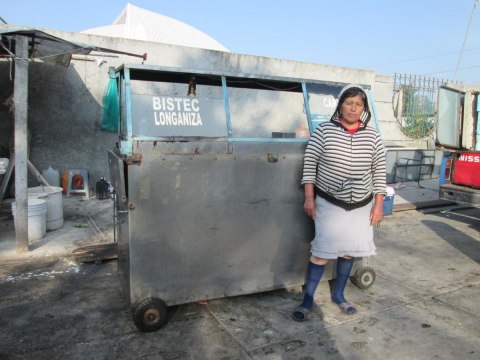 A loan helped buy a small truck for her pig-raising business.

Ana Maria lives in a small community known for having very few inhabitants, but they are very kind and hard working. A large part of the population has small businesses, in addition to raising and fattening farm animals. Ana Maria is very hard-working and, above all, responsible. She is 51 years old and married to Manuel, with whom she has formed a family including four children, none of whom are now dependent on the couple. Now the couple are grandparents with their first grandchild. “Dona Mary,” as she is affectionately known, has sold tacos for some 18 years. She says that she began because a family member of her husband's had a restaurant-bar which he eventually abandoned. Thus Mary's husband came to take charge of the business and they sold tacos. With this loan, Ana Maria intends to purchase a small truck because the one they had was stolen. It would be utilized for the business since they have none at present. Also, Ana Maria lacks the money to purchase feed in large quantities for her pigs. She comments, “If feed were cheaper, I could produce the amount of fattened pigs that I used to.” Ana Maria used to have 70 pigs just for fattening but the price of feed has risen so much that she doesn't think she can maintain that many. The pigs she recently bought will be raised and fattened in just four months. After this, she expects to use them in her lunch stalls for preparing pork tacos. Ana Maria has three taco stalls in the municipality, but now she is somewhat preoccupied, because 12 of her mid-sized pigs are sick, and she cannot use them. This really has her concerned because if they die, her investment and earnings will be lost. Ana Maria's dream is to continue conserving her business and continue offering work to other persons. At present, she has three people working for her. *The photograph was taken at her house alongside a vending wagon for her tacos.