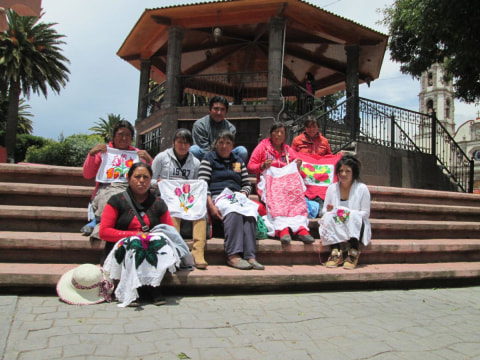 A loan helped to buy more sheep and food for her chickens and turkeys.

The "Rosa Blanca" group is located in a very peaceful Mazahua community, which is full of very friendly and hard working people. It is a beautiful place; currently, everything is green and the fields are full of corn. The people are very happy because in September, they will be trying the first of the corn.

To arrive in this place, one must walk many kilometers because, unfortunately, there is no transportation. During the walk, though, it is possible to appreciate the corn crops, and one can find very nice people.

Matilde is a hard working woman, who is dedicated to the well-being of her family. She is 46 yeas old and has been marred for 22 years to Mr. Juventino, who works on the farm. Together, they have formed a family with four children--two of whom are studying, one in university and the other in primary school.

For 17 years, Maty--as Matilde is fondly called--has dedicated herself to raising and fattening animals, such as chickens, sheep, and turkeys. For Maty, starting this work was a necessary. She says that what her husband earned wasn't enough to cover the household expenses; as a result, she decided to try this type of work with animals while she was taking care of her children.

She remembers that when she started raising her animals, it was with her savings. Later, when she heard about this institution, it was a big help for her, because she could then buy more animals. She remembers that with her first loan, she only bought 2 sheep, and her loans were very small. Little by little, though, her income has grown, and the number of her sheep has grown too, so that now she has 15 sheep. The new loan will be used to buy animals and feed.

She buys the animals when they are small; she fattens them and then sells them. Now, she is requesting a loan to buy more sheep and feed for her chickens and turkeys. Maty is very thankful for the support of her loans because with the earnings, she has been able to improve her income and give her children an education.

Maty doesn't have any difficulty in this business. It is only when her animals become sick and die that she has a loss of earnings and investment. But when that happens to her animals, she immediately goes to her veterinarian.

Maty's goal is for her children to finish studying for a professional career, so that they can improve their quality of life. Her children's education is fundamental to Maty.

* The photograph was taken on the stairs of the city kiosk. Maty is wearing the red coat.