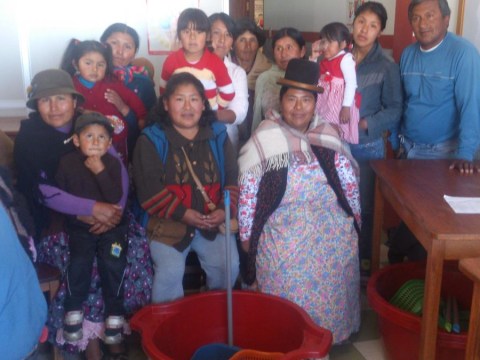 The communal association "Warmin Amtawipa" will begin its sixth loan cycle with Pro Mujer as part of the Colipani regional center. It is composed of eight members and is led by a board of directors where Señora Julia is the president. The businesses that the members of the association run are varied. Among them are: selling blankets, neighborhood store, selling perfumes, selling pants, selling salchipapas [a traditional street food containing beef and potatoes], selling toys, and selling underskirts. The loan that they will take out will benefit these micro-entrpreneurs, of whom Señora Julia is one. She indicates that she joined Pro Mujer six years ago, entering because of the invitation of a friend who was a client of the institution. She now has a business of making and selling pants. She lets it be known that she has had this business for 15 years, and that she learned this business from working in a sewing factory. With her little savings, she was inspired to open her sewing workshop. The loan that she will take out now is to increase her capital to buy fabric wholesale, which she will acquire from the wholesale sellers in the city of La Paz, and after making the pants she will sell them in her sales space. This form of work allows her to generate income to support her family economically, since she is married and has three children. When she is asked what she likes about Pro Mujer, she responds that she likes the health area and the savings that the institution offers.