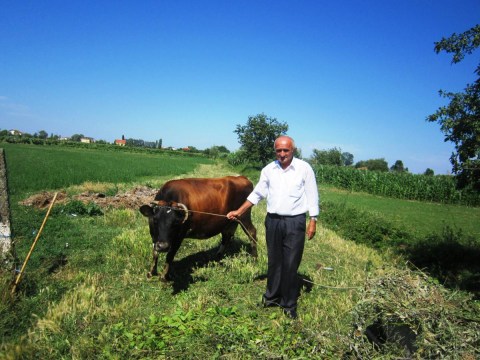 Lek is a 61-year-old villager and a married father of two in their 20s from the northern part of the country. He wants to buy two dairy cows. For the past ten years, he's been doing agriculture/livestock work with the clientele of his products (300 eggs a month,6 liters a month and a calf a year) in a neighboring small city. He's got in his possession about 5 dynym of agricultural land where he plants mainly fodder for the animals so that he doesn't have to buy it. Lek also has one dairy cow, three pigs and 40 chickens. From the orchards they have, they don't sell fruit. To earn extra income Lek works in a nearby gas station for $118/month in addition to his retirement pension of $250/month.