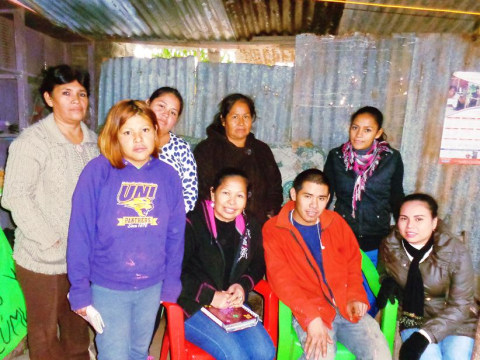 A loan helped to buy tables and chairs to sell food to more customers and improve her income.

41-year-old Petrona, who is single and has four children aged 9, 12, 15 and 18, runs a business selling traditional food. She is good mother and is determined, perseverant, patient, friendly, responsible and very hardworking. She runs her business in the 'Plan 3000' area where most people are multilingual; Aymaras, Quechuas and Guaranís, mostly. Situated south of the city, the area was taken over by migrants who set up trade which is now flourishing. It has a warm climate with a temperature which fluctuates between 21 and 35 degrees centigrade. Petrona has a dark complexion, brown eyes and long black hair and is short and slim. Her mother tongue is Guaraní which she speaks at home. She speaks Spanish, however, for general purposes and for her business (seated and wearing a black jumper with pink edging). She lives with her children who are still all at school. They live in their own home, a wooden building with a corrugated roof and earthen floor which has electricity and water which they pump from a well, but there is no plumbing. Since she needs to boost her income, she set up an entrepreneurs' bank with 8 members (who work in selling fruit, selling milk, making textiles, selling food, selling second hand clothing, agriculture and selling soft drinks) so they could all apply for loans and improve their businesses. Her business involves selling 'Patasca' which is a succulent food, which is much sought after by people suffering from hangovers. It is a kind of thick ,which can be made from meat of can be a mixture of beef and pork, and is served with rice. In Petrona's words: "it is a meal to beaten in the morning, quite early, and some people even eat patasca as a hangover cure...". She works in her fixed premises every day of the week mid-morning and in the evening. The advantage of her business is that she has regular customers each day but the disadvantage is that she lacks capital to invest in the business. Her dream is to own her own traditional food restaurant. She would like to extend her business by buying tables and chairs so she can serve more customers and boost her sales. This is her first loan cycle with the institution in the 2 years she has been running her business. The reason why Petrona is seeking a loan is to buy tables and chairs to sell food to more customers and boost her income.